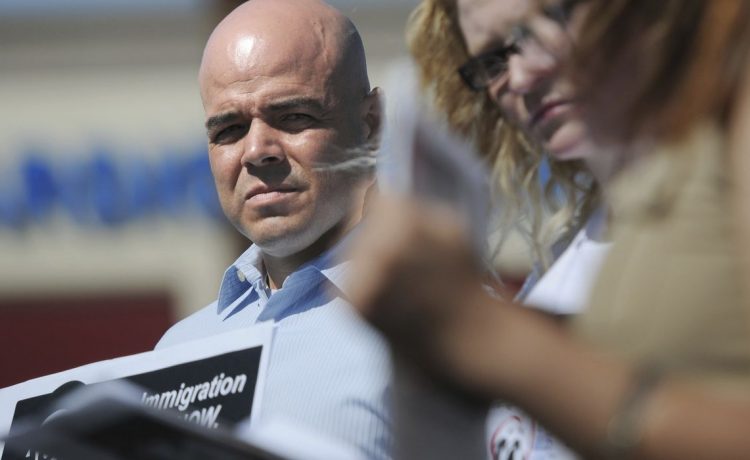 LAS VEGAS — Police in Las Vegas searched the home of a local elected official on Wednesday and towed away a vehicle similar to one sought in the criminal investigation of the fatal stabbing of a veteran reporter whose investigative work drew the official’s ire.

Las Vegas police did not immediately provide details about the search in their probe of the death of Las Vegas Review-Journal reporter Jeff German.

Telles, dressed in a white hazardous materials-style jumpsuit, did not comment when he returned home hours later and was approached by a KLAS-TV reporter, the news station reported.

In the evening, news crews watched as uniformed officers knocked on the door of the house and no one answered.

Telles had posted Twitter complaints about German in recent months, the Review-Journal reported, including claims in June that German was a bully who was “obsessed” with him.

The developments came after police on Tuesday showed a brief video of a possible suspect walking on a sidewalk clad in bright orange “construction attire,” and distributed a photo of a 2007-2014 red or maroon GMC Yukon Denali four-door SUV with chrome handles, a sunroof and a luggage rack that officials said may be linked to the case.

Newspaper photos showed Telles washing a similar vehicle parked in his driveway on Tuesday, and KTNV-TV reported the vehicle was towed away after police arrived on Wednesday.

German spent months reporting on turmoil surrounding Telles’ oversight of the office that handles property of people who die without a will or family contacts.

County officials enlisted a consultant for the public administrators’ office after German’s reports were published beginning in May. Telles, a 45-year-old Democrat, went on to lose his June primary election. His term ends in January.

The Review-Journal reported Wednesday that German recently filed public records requests for emails and text messages between Telles and three other county officials.

Michael Murphy, the former Clark County coroner hired to address friction and complaints of bullying and favoritism in the public administrators’ office, did not immediately respond to a telephone message.

German, 69, was found Saturday morning stabbed to death outside his home. Police said he apparently was killed Friday in an altercation with another person, and characterized the attack as an isolated incident.

German died of “multiple sharp force injuries,” the Clark County coroner said, and the case was ruled a homicide. Messages left by The Associated Press for Telles at his county office were not immediately returned.

German joined the Review-Journal in 2010 after more than two decades at the Las Vegas Sun, where he was a columnist and reporter who covered courts, politics, labor, government and organized crime.

He was known for stories about government malfeasance and political scandals and coverage of the 2017 mass shooting at a Las Vegas music festival that killed 60 people and wounded more than 400 others.