Ron DeSantis closing in on Donald Trump as 2024 favorite 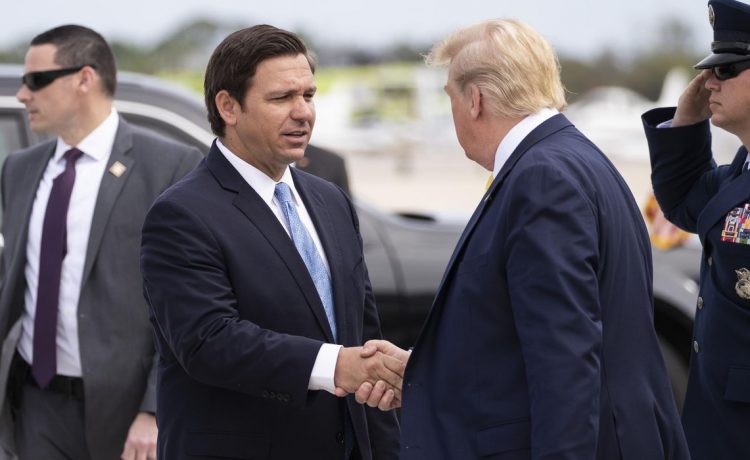 A Granite State Poll, conducted by the University of New Hampshire Survey Center found Mr. DeSantis leading Mr. Trump, 39% to 37% among likely New Hampshire Republican primary voters. The results are considered a statistical tie between the two potential candidates but the survey found Mr. Trump’s popularity in the Granite State has been declining, while support for Mr. DeSantis has more than doubled in the state since October.

Additional data from the poll show Mr. DeSantis beating President Joe Biden in a 2024 general election matchup, 47% to 46%, which is another statistical tie. In the same survey, Mr. Trump would lose to Mr. Biden in the general election, 50% to 43%. Mr. Biden won New Hampshire in 2020 by nearly 8 points.

“DeSantis runs better against Biden than does Trump, a further sign of Trump’s weakening support among NH Republicans,” the pollsters said in a statement.

Mr. DeSantis’s poll numbers in New Hampshire coincide with his rise in national name recognition, thanks in part to the media attention he has attracted after publicly battling the Biden administration and Democrats on COVID-19 mandates and the party’s “woke” agenda.

UNH Survey Center Director Andrew Smith said it’s too soon for the poll to predict a New Hampshire primary winner but the early numbers show Mr. DeSantis “is certainly positioning himself to be in a good spot, should he decide to run.”

The New Hampshire primary is considered one of the most critical contests in determining the Republican presidential nominee. For the past century, the state has conducted the nation’s first primary, typically in early January, and the winner often secures a spot as a frontrunner and eventual winner.

The New Hampshire Republican primary victor has gone on to win the party’s nomination for president in every contest since 1968 except the 1996 and 2000 primaries.

He’s campaigning for a second term as governor and enjoys a comfortable lead in the polls over his likely Democratic opponent, Rep. Charlie Crist.

While he sidesteps questions about a White House run in 2024, Mr. DeSantis regularly attacks President Biden and his policies, while rarely mentioning his Democratic opponents in the governor’s race.

Mr. Trump, 76, has strongly hinted he’ll run a third time for president and has told media outlets he would beat Mr. DeSantis in a primary matchup.

Mr. Trump, who lives in Palm Beach, takes credit for helping Mr. DeSantis win the governor’s race in 2018 by endorsing him over his Republican opponent, then-Florida Agriculture Commissioner Adam Putnam.

Mr. Trump maintains strong support among Republicans and in most polls is the clear first-choice pick among GOP voters, while Mr. DeSantis consistently ranks second.

A June 5 poll conducted by Morning Consult and Politico found Mr. Trump leading Mr. DeSantis 51% to 18% in a hypothetical 2024 matchup.

In a separate poll conducted June 2 for the Baltimore Sun and the University of Maryland, Mr. Trump trounced popular GOP Gov. Larry Hogan 48% to 25% among likely GOP voters in Maryland.

The New Hampshire poll results favoring Mr. DeSantis, however, follow other indicators that suggest Republicans may be looking beyond Mr. Trump in 2024.

National Republican megadonors have poured millions of dollars into the effort to re-elect Mr. DeSantis in Florida, suggesting they are eyeing his future beyond the governor’s mansion.

Mr. DeSantis raised nearly $107 million this election cycle and some of the money comes from former Trump donor Walter Buckley Jr., a retired venture capitalist who lives in Palm Beach, not far from Mr. Trump’s Mar a Lago estate. Mr. Buckley, a GOP megadonor who gave significant sums to Mr. Trump’s 2020 reelection bid, gave Mr. DeSantis $500,000 according to campaign funding data. Another GOP megadonor, businessman Richard Uihlein and his wife donated a total of $1 million to Mr. DeSantis this election cycle. Mr. Uihlein and his wife were major Trump donors during the last presidential election.

Last week, influential billionaire Elon Musk, who is seeking to buy Twitter, named Mr. DeSantis when asked who he was leaning toward supporting in a 2024 presidential run.

“I sense there is a growing, although not yet overwhelming, number of Republicans who feel Trump is unelectable in 2024,” said Mason-Dixon Poll Director Brad Coker. “He did lose the popular vote twice.  They may not be in the rebellion stage, but many think there should at least be a conversation about what is the best way forward to recapture the White House.”

In 2024 Republican presidential polls, Mr. DeSantis is often the only candidate other than Mr. Trump to win double-digit support. He is the only Republican who comes close to Mr. Trump in 2024 matchups.

Mr. Smith said he expects voter preferences to change in the months ahead as voters start paying more attention to the 2024 election.

“As we go along, Trump will probably fade and other candidates will come to the fore,” Mr. Smith said. “That’s the typical pattern that you see in election after election.”