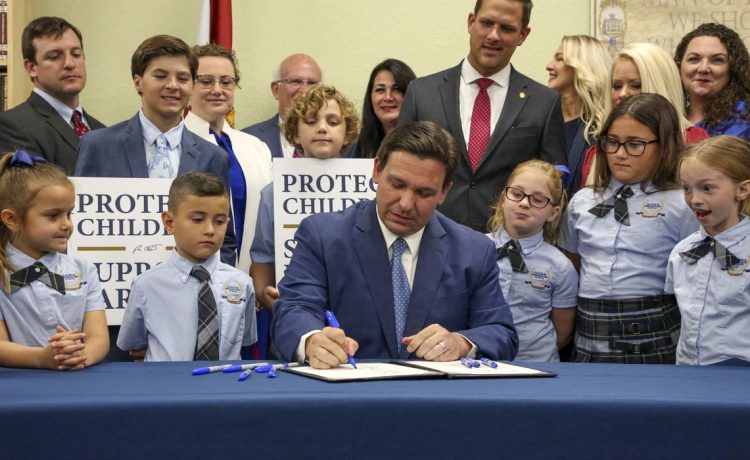 Florida Gov. Ron DeSantis isn’t necessarily ready to let bygones be bygones when it comes to Disney’s attack on his Parental Rights in Education law.

The Republican governor said it was the Walt Disney Co. that started the feud after returning CEO Robert Iger extended an olive branch, reportedly telling employees at a Monday town hall that he wanted to “quiet things down” and was “sorry to see us dragged into that battle.”

Mr. DeSantis took issue with Mr. Iger’s use of the passive voice.

“We didn’t drag them in, Tucker. They went in on their own, and not only opposed the bill, they threatened to get it repealed,” Mr. DeSantis told Fox News host Tucker Carlson in a Tuesday night interview.

The bill, derided by foes as the “Don’t Say Gay” bill, prohibits classroom instruction on sexual orientation and gender identity in grades K-3.

“These are parents’ rights, important policies in our state that are very popular. And so they brought this on themselves,” the governor said.

After Mr. DeSantis signed the bill in March, Disney released a statement saying that “our goal as a company is for this law to be repealed by the legislature or struck down in the courts.”

The Republican-led state legislature responded by passing bills to dissolve the special administrative status of the Walt Disney World Resort near Orlando.

Gov. Ron DeSantis reacts to recent comments from Disney CEO Bob Iger: “They brought this on themselves.” pic.twitter.com/t6CC6ieEM3

Mr. Iger, who was brought back last week to replace CEO Bob Chapek, characterized the political turmoil as “distracting,” adding that “to the extent that I can work to kind of quiet things down, I’m going to do that,” according to a recording obtained by Manhattan Institute senior fellow Christopher Rufo.

He also expressed support for the company’s commitment to LGBTQ “storytelling,” according to the New York Times.

“One of the core values of our storytelling is inclusion and acceptance and tolerance, and we can’t lose that,” Mr. Iger said. “We’re not going to make everyone happy all the time, and we’re not going to try to.”

Mr. DeSantis said that all he did was “stand up for what’s right.”

“And, yes, they’re a big, powerful company,” the governor said. “But you know what? We stand up for our folks. And I don’t care what a Burbank-based California company says about our laws.”

• Matt Delaney contributed to this report.