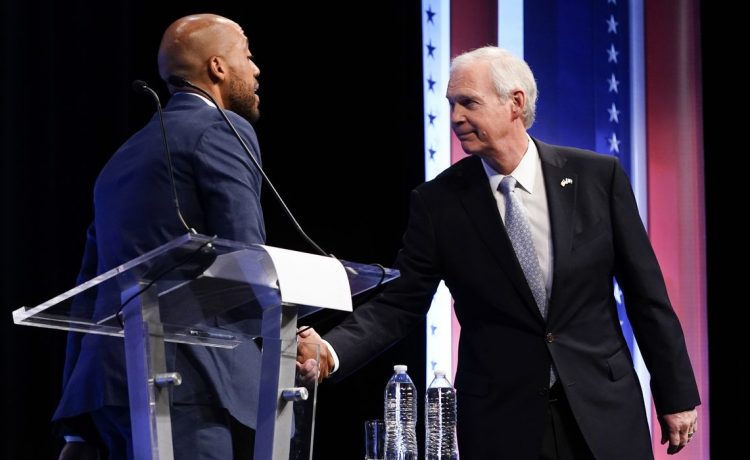 Sen. Ron Johnson, Wisconsin Republican, and Democratic challenger Mandela Barnes attacked each other on the economy, taxes, crime, abortion, immigration and other issues in their second and final debate before the November election.

Mr. Barnes framed Mr. Johnson as an incumbent who cut taxes to benefit his wealthy donors and as a lawmaker with extreme views on abortion who uses “fear mongering” to reject a pathway to citizenship for illegal immigrants.

Mr. Johnson said he has worked to create jobs and helped small businesses with tax cuts and pledged to cut deficit spending in order to reduce runaway inflation, which he blamed on Democrats and the Biden administration.

He rejected setting a minimum wage, which Mr. Barnes supports and wants to raise.

“The number one component of a solution to all these problems is growing our economy,” Mr. Johnson added. “Under Biden, we just had two quarters of negative growth because they don’t have a clue how to run an economy and they are continuing to deficit spend.”

The two candidates took shots at each other after a poll released Wednesday by Marquette University showed the race moving in Mr. Johnson’s favor.

The survey gave the incumbent, who is running for a third term, a six-point lead over Mr. Barnes, the state’s lieutenant governor, who was statistically tied in a CBS/YouGov poll completed Oct. 7.

The tight race is considered one of the most significant Senate battles in the country and may determine which party controls the Senate in January.

Mr. Barnes has stepped up attacks on Mr. Johnson in recent days, releasing a new campaign ad attempting to tie Mr. Johnson to the rioters who stormed the U.S. Capitol on Jan. 6, 2021. Mr. Barnes has also sought campaign trail appearances by President Biden and former President Barack Obama to help boost him.

Mr. Johnson has zeroed in on Mr. Barnes as a liberal who is soft on crime and who supports the “defund the police” movement.

“We need law enforcement. And the problem with the whole defund movement, which he has been a big supporter of, is it dispirits law enforcement,” Mr. Johnson said. “They’re having a hard time recruiting members and we aren’t going to have the law enforcement officers we are gonna need to reduce crimes.”

Mr. Barnes countered by accusing Mr. Johnson of siding with the Jan. 6 rioters, who injured more than 100 police officers.

“No police officers in this country were more dispirited than the ones who were present at the United States Capitol on Jan, 6,” Mr. Barnes said. “So this talk about support for law enforcement. It’s not real. It’s not true.”

Mr. Johnson denied the charge and said he forcefully condemned the violence that day and noted that Mr. Barnes had “ignored 570 riots” that injured 2,000 law enforcement officers in summer 2020.