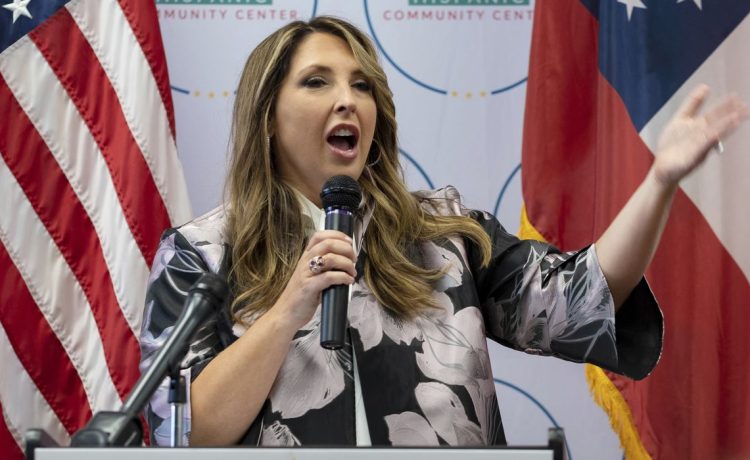 Republican National Committee Chairwoman Ronna McDaniel is working overtime to hold together the support she needs for reelection next month, personally intervening — including calling reporters — when any of the committeemen supporting her waver.

She came close Monday to losing the support of a second RNC member out of the 107 who have pledged to back her in the leadership election next month.

Minnesota National Committeeman Alex Plechash told the Washington Times that he had second thoughts after initially endorsing Mrs. McDaniel in November when the only person in the race was My Pillow CEO Mike Lindell.

“I submitted that endorsement before the field had expanded to include Harmeet Dhillon,” he said, referring to the RNC member from California who is challenging Mrs. McDaniel.  “I am currently not endorsing anyone as I wish to consider all information before making a decision.”

By Monday morning, Mrs. McDaniel called The Times with Mr. Plechash on the line. He promptly said that he had changed his mind again and now stood by his earlier endorsement of Mrs. McDaniel.

The call unfolded this way:

Mrs. McDaniel: “I just got off the phone and wanted to clarify he’s going to stay on with me. So I’ll let Alex say that.”

Mr. Plechash: “I know I replied to you saying that I was remaining neutral for the moment, but I decided to go ahead and stick with Ronna.”

Mr. Plechash also said that he went neutral because he was “getting blasted” over so many things from different people after it became known he had endorsed Mrs. McDaniel.

“I thought about it, but I needed to kind of evaluate what’s going on here. And I’ve had a chance to evaluate it a bit, and  I’m going back to my original stand,” he said.

Last week, Mrs. McDaniel lost the endorsement of Nebraska Republican Party Chairman Eric Underwood, who had initially praised her for “dedicating her time and energy to building the party.”

Mr. Underwood’s defection was first reported by The Post Millenial. He told the outlet in a statement: “At this time, I rescind my endorsement of Chairwoman McDaniel.” He noted that he would “not make any further public endorsement for any leadership level at the RNC.”

Mr. Underwood plans to bring the question of RNC leadership to Nebraska GOP officials next month before the scheduled leader vote in California.

Mrs. McDaniel touted the 107 RNC endorsements out of the 168 RNC members earlier this month, making the three-term Chair’s reelection for an unprecedented fourth term appear to be unstoppable.

However, a faction of RNC members and conservative leaders outside the RNC have voiced misgivings about Mrs. McDaniel’s leadership as she presided over a string of election disappointments in 2018, 2020 and 2022.

Despite the defection and near defection, Mrs. McDaniel’s support remains strong in RNC circles.

Longtime GOP donor and former RNC member Tommy Hicks, who previously served as co-chair with Mrs. McDaniel, recently threw his support behind her.

In a letter to all RNC members, he wrote, “Ronna has strengthened the RNC’s cornerstone role. It has been an honor to carry that torch alongside Ronna and I fully support and endorse her to be re-elected as your Chair!”

Since Ms. Dhillon jumped into the chair race two weeks ago, accusations have flown between the two women vying to take the reins of the Republican Party.

Ms. Dhillon doubted the number of supporters Mrs. McDaniel’s team highlighted. She said the list contains members who cannot vote in next month’s winter meeting in Dana Point, California, because they will be termed out in their chairmanships.

Ms. Dhillon said she has at least 50 members supporting her for the chairmanship, one of whom is Virginia Committeeman Morton Blackwell, a longtime influential RNC committee member, according to reports.

As for Mr. Trump, when he was asked by Breitbart News whom he supports, he acknowledged that Ms. Dhillon is his lawyer, but that he liked both the women in the race and is not favoring one over the other.

“The chairwoman’s support has only grown for her since she has announced and since opponents have challenged her,” a source familiar with her campaign said. “A lot of the criticism that you’re hearing and seeing have been critics of this RNC right now and for well before Ronna became chairwoman.”