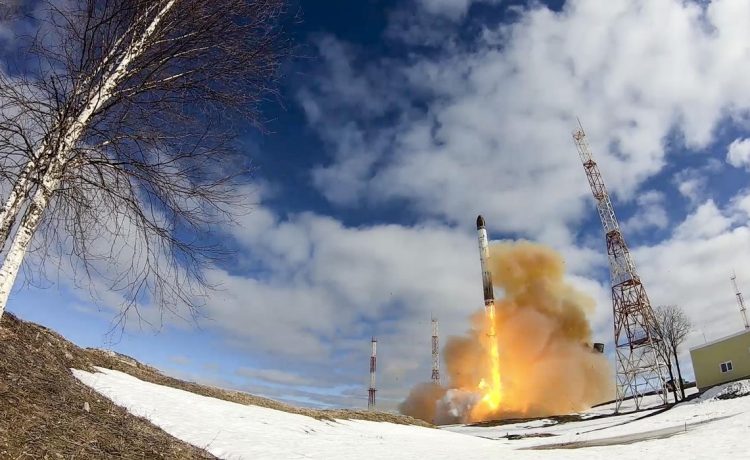 MOSCOW — Russia on Monday announced a freeze on U.S. inspections of its nuclear arsenals under a pivotal arms control treaty, claiming that Western sanctions have hampered similar tours of U.S. facilities by Russian monitors.

The move reflects soaring tensions between Moscow and Washington over Russia’s military action in Ukraine and marks the first time the Kremlin halted U.S. inspections under the New START nuclear arms control treaty.

In declaring the freeze on U.S. inspections, the Russian Foreign Ministry said the sanctions on Russian flights imposed by the U.S. and its allies, visa restrictions and other obstacles effectively have made it impossible for Russian military experts to visit U.S. nuclear weapons sites, giving the U.S. “unilateral advantages.”

It claimed that U.S. inspectors have not faced such difficulties, even though Moscow has closed its skies to the European Union’s 27 nations, the U.K. and Canada – though not the U.S. – after the start of the conflict in Ukraine in late February. Russia said at the time that exceptions would be made for diplomatic missions and deliveries of humanitarian aid.

The Russian Foreign Ministry claimed that the freeze is temporary and allowed by the pact “in exceptional cases.”

It noted that Russia “highly values” the New START, adding that inspections could resume after the problems hampering them are solved.

“Russia is fully committed to abiding by all of the provisions of New START, which we see as a crucial tool for maintaining international security and stability,” the ministry said, urging a “thorough study of all existing problems in this area, the successful settlement of which would allow a return to full-scale application as soon as possible of all verification mechanisms of the Treaty.”

The New START treaty, signed in 2010 by President Barack Obama and Russian President Dmitry Medvedev, limits each country to no more than 1,550 deployed nuclear warheads and 700 deployed missiles and bombers, and envisages sweeping on-site inspections to verify compliance.

Just days before the New START was due to expire in February 2021, Russia and the United States agreed to extend it for another five years.

Joanna Kozlowska in London contributed to this report.