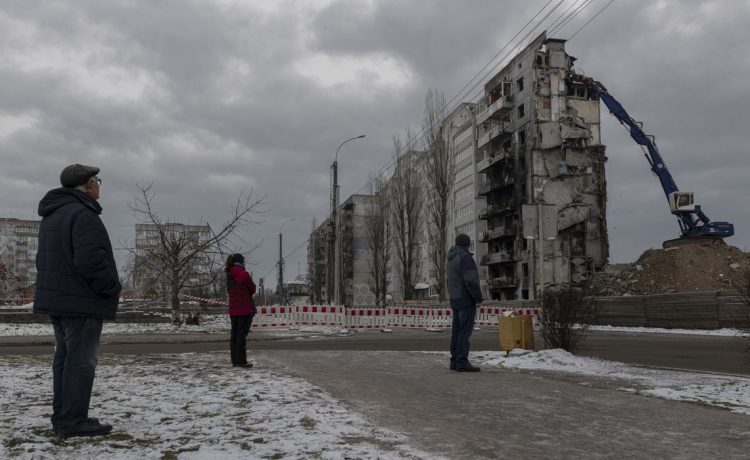 Would Ukraine be willing to give Russia a piece of the divided Donbas region in exchange for a guaranteed fast track to full NATO membership?

Might Kyiv consider dropping its demand that Russian military officials face international war crimes charges in exchange for Moscow funding the reconstruction of Ukrainian cities devastated by missile strikes? Or could the Kremlin agree to pull its forces out of Ukraine if the West offers some form of security guarantees, such as a limit on American military assets stationed in eastern Europe?
And what about Crimea?

Those questions and a host of others are being debated in military and national security circles in Washington, Kyiv and capitals across Europe as both Russia and Ukraine signal that they recognize their grinding, nine-month war will likely end only at the negotiating table. The two sides remain far apart and the prospects for a deal anytime in the immediate future appear slim at best. But with neither side apparently on the verge of a definitive victory — and with Russia running low on ammunition and troops, and with Ukrainian civilians bracing for a long, hard, cold winter as Moscow relentlessly targets the country’s energy infrastructure — the notion of peace talks seems as close now as it has arguably been since Russia invaded in late February.

National security and foreign policy analysts, however, warn that the days ahead are fraught for diplomacy. They argue that Ukraine and its Western partners should not consider a scenario in which any Ukrainian territory is ceded to Russian President Vladimir Putin, despite Mr. Putin’s claimed annexation of four eastern Ukrainian provinces and his longstanding but widely-rejected claim to the Crimean peninsula, which Russia has effectively controlled since 2014.

Putting a chunk of eastern Ukraine on the table would likely be the fastest way to get Moscow to negotiate in a serious way, but specialists warn that such a move would set a dangerous precedent and would essentially reward Russia for launching a needless, illegal invasion.

“As the Ukrainians think about how this ends, which is exactly the right question, their first answer on how it ends is the Russians have to be out of their country,” said William Taylor, former U.S. ambassador to Ukraine and now the vice president, Russia and Europe, at the U.S. Institute of Peace.

SEE ALSO: Kremlin: No withdrawal from Ukraine before end of year

“There is no moral reason for them to be there. There’s no strategic reason. There’s no threat to the Russians,” Mr. Taylor told The Washington Times in an interview. “There’s no justification in any circumstances for the Russians to expect to stay in the country.”

“I think it should not be a part of the conversation from a moral perspective,” he said.

Mr. Taylor and other analysts stressed that Mr. Putin, faced with mounting and at times scathing criticism in domestic military circles over how he has prosecuted the war in Ukraine, is desperately seeking an off-ramp from his “special military operation” that allows him to save face to at least some degree. Mr. Putin himself seemed to confirm that line of thinking, saying at a press conference late last week that the two countries will eventually need to strike a deal.

“Negotiations will have to be made,” Mr. Putin said, according to English-language media reports of his remarks, noting that “the realities that are taking shape on the ground” could fuel peace talks.

But Mr. Putin, at least in public, insists the war is going well for Russia and stressed that he remains highly skeptical of any deal with Ukraine or its Western partners, expressing deep cynicism toward NATO, its motivations, and the seriousness with which it would consider Russia’s positions. Already Russia has suffered strategically from the war, with NATO agreeing to accept Finland and Sweden, Europeans turning to alternative markets for oil, and sanctions dragging down both the economy and Russia’s vital defense industry.

In a remarkable admission last month, the Kremlin’s top spokesman said it could live with Mr. Zelenskyy and his government staying in power, after justifying the initial war in part as a move to “de-Nazify” the Ukrainian government and depose its leaders.

On the Ukrainian side, President Volodymyr Zelenskyy also seemed to suggest in recent days that he may eventually be willing to sit down at the negotiating table. Mr. Zelenskyy held numerous calls with top Western officials over the weekend, including President Biden on Sunday.

During the call, Mr. Biden “reaffirmed the U.S. commitment to continue providing Ukraine with security, economic and humanitarian assistance, holding Russia accountable for its war crimes and atrocities, and imposing costs on Russia for its aggression,” according to a White House readout of the call.

In his own remarks Sunday, Mr. Zelenskyy said he spoke with French President Emmanuel Macron and said that “We are coordinating steps, preparing for the implementation of our peace formula” that will eventually spell an end to the war.

Ukraine in the driver’s seat

Despite its much larger military, Russia has failed to achieve its key strategic goals in Ukraine. Its campaign early in the war to capture Kyiv failed spectacularly, and a Ukrainian counteroffensive has pushed Russian forces out of Kharkiv, Kherson and other key Ukrainian cities.

Last week, a series of apparent drone strikes — widely believed to be the work of the Ukrainian armed forces — targeted military bases and airports inside Russian territory, demonstrating that the war could bring pain to the Russian heartland as well. And Pentagon officials said Monday that the Russian army is rapidly running out of ammunition for its rockets and artillery, meaning it can only maintain its current pace of attack for another few months at best.

All of those factors, combined with growing dissatisfaction inside Russia over the country’s war plan, mean that Moscow would have little leverage if peace talks began today, giving Ukraine the clear upper hand. That means the Zelenskyy government could stick to its most important demands, including that Russians be held legally and financially responsible for the consequences of their decision to invade.

“There’s got to be some kind of Russian reparations. And also Russians being held [on trial] for war crimes. That’s got to be on the table,” said Jim Townsend, former deputy assistant secretary of defense for European and NATO policy during the Obama administration. “They’re going to have to pay for the atrocities they’ve performed.”

“There’s not a whole lot Russia is going to get out of this,” Mr. Townsend told The Times.

Indeed, Mr. Zelenskyy and other Ukrainian officials have insisted they will not cede any territory to Russia. They’ve also said they expect Russian troops and pro-Russian separatists to give up their claim to Crimea, which Russia forcibly annexed in 2014, rather than return to the status quo before February’s invasion.

Mr. Zelenskyy also has insisted that top Russian figures be tried for war crimes for the continued targeting of civilians. There’s also widespread support in the West for forcing Russia to make financial restitution for the damage it has caused in Ukraine.

That leaves little in terms of what Russia could realistically hope to get out of any peace deal. Perhaps the West would consider agreeing to delay indefinitely Ukraine’s hopes of joining NATO, but the U.S. and Europe would almost surely offer concrete security assurances to Kyiv in place of full NATO membership.

“How do they ensure that after this war ends … they’re not invaded again?” Mr. Taylor said. “When [the Ukrainians] win, if they win, they know as long as Putin and Putin-ism are present in Russia, they’re vulnerable. The question is, after the victory how do they ensure over the next five or 10 years or longer they’re not invaded again? One answer is NATO. Another answer is a commitment on the part of the West, led by the United States, to make the Ukrainians invulnerable, make the Ukrainians so strong, so militarily powerful, that the Russians will not be able to invade.”

Russia would likely seek security guarantees of its own, perhaps in the form of limits on U.S. military assets in Eastern Europe and a cap on the size and strength of the Ukrainian armed forces. But those demands are likely non-starters for the West given Russia’s clear willingness to attack a neighbor in contravention of international norms.

The U.S. and Europe could offer to lift some economic sanctions on Moscow if it fully withdraws from Ukraine, but even those concessions would surely come with significant strings attached and would likely be enacted only after Russia proves its days as an aggressor are behind it.

For Mr. Putin, the lifting of sanctions may not be enough. The Russian leader has shown little willingness to accept defeat in Ukraine and will surely try to secure some concessions that will allow him to claim a victory, limited as it may be. He has already taken to highlighting some claimed successes from the war, noting this month that the Sea of Azov was now an “inland sea” for Russia following the annexations in eastern Ukraine, something Mr. Putin said even Peter the Great had failed to achieve.

Some specialists say that reality could mean that the war drags on for months or even years and may only come to an end if and when Mr. Putin is replaced. President Biden suggested as much in a controversial offhand remark on a visit to Warsaw, Poland in March, only to be quickly contradicted by his own aides and allies.

But much has changed in the months since Mr. Biden spoke.

“The resolution is that Putin isn’t in the chair anymore,” Mr. Townsend said. “It’s not as much a matter of him backing down as it is a new boss who may be as bad as Putin, but he has some room to maneuver” politically and diplomatically with respect to getting out of the war in Ukraine.