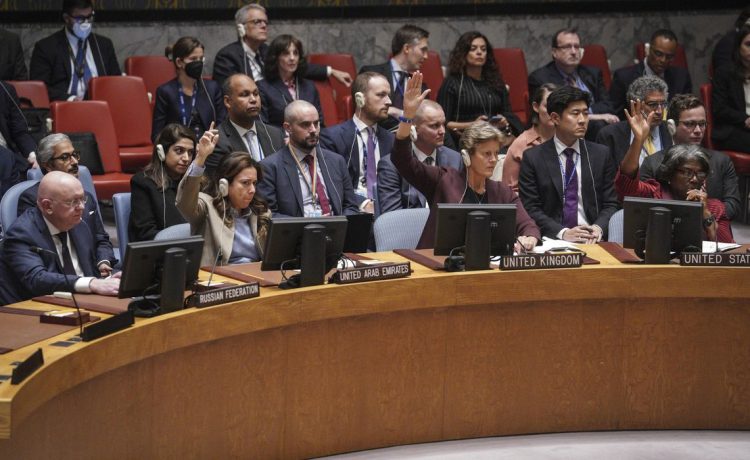 UNITED NATIONS — Russia vetoed a U.N. resolution Friday that would have condemned its referendums in four Ukrainian regions as illegal, declared them invalid and urged all countries not to recognize any annexation of the territory claimed by Moscow.

The vote in the 15-member Security Council was 10-1 with China, India, Brazil and Gabon abstaining.

The resolution would also have demanded an immediate halt to Russia’s “full-scale unlawful invasion of Ukraine” and the immediate and unconditional withdrawal of all its military forces from Ukraine.

U.S. Ambassador Linda Thomas-Greenfield said before the vote that in the event of a Russian veto, the U.S. and Albania who sponsored the resolution will take it to the 193-member General Assembly where there are no vetoes, “and show that the world is still on the side of sovereignty and protecting territorial integrity.”

That is likely to happen next week.

“The area Russia is claiming to annex is more than 90,000 square kilometers,” she said. “This is the largest forcible annexation of territory since the Second World War. There is no middle ground on this.”

The council vote came hours after a lavish Kremlin ceremony where President Vladimir Putin signed treaties to annex the Russian-occupied Ukrainian regions of Luhansk, Donetsk, Kherson and Zaporizhzhia, saying they were now part of Russia and would be defended by Moscow.

Thomas-Greenfield said the results of the “sham” referendums on whether the regions wanted to join Russia were “pre-determined in Moscow, and everybody knows it.” “They were held behind the barrel of Russian guns,” she said.

Adding that “the sacred principles of sovereignty and territorial integrity” at the heart of the U.N. Charter must be defended, she said, “All of us understand the implications for our own borders, our own economies, and our own countries if these principles are tossed aside.”

“Putin miscalculated the resolve of the Ukrainians,” Thomas-Greenfield said. “The Ukrainian people have demonstrated loud and clear: They will never accept being subjugated to Russian rule.”

Russian Ambassador Vassily Nebenzia defended the referendums, claiming that more than 100 international observers from Italy, Germany, Venezuela and Latvia who observed the voting recognized the outcomes as legitimate.

“The results of the referendums speak for themselves. The residents of these regions do not want to return to Ukraine. They have made a an informed and free choice in favor of our country,” he said.

Nebenzia added: “There will be no turning back as today’s draft resolution would try to impose.”

He accused Western nations on the council of “openly hostile actions,” saying they reached “a new low” by putting forward a resolution condemning a council member and forcing a Russian veto so they can “wax lyrical.”

Under a resolution adopted earlier this year, Russia must defend its veto before the General Assembly in the coming weeks.

Chinese Ambassador Zhang Jun said that “the sovereignty and territorial integrity of all countries should be safeguarded.” But China abstained, he said, because it believes the Security Council should be using trying to calm the crisis “rather than intensifying conflicts and exacerbating confrontation.”

Brazil’s ambassador, Ronaldo Costa Filho, said the referendums “cannot be perceived as legitimate” and his country stands by the principle of territorial integrity of sovereign states. But it abstained because the resolution didn’t contribute to de-escalating tensions and finding “a solution for the conflict in Ukraine,” he said.