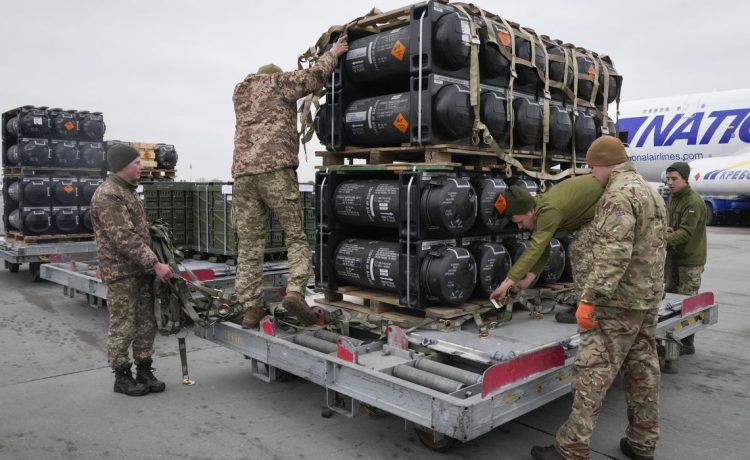 U.S. officials are pushing back hard against Russian claims that American anti-aircraft missiles meant for Ukraine have begun showing up on the illicit arms market in Syria.

Intelligence and diplomatic sources say the claims are a textbook case of Kremlin disinformation aimed at undercutting U.S. and allied support for arming Ukrainian forces while diverting criticism of Russia’s invasion.

In another page from the recent Russian playbook, Chinese state media have quickly piggybacked on the Kremlin claims in recent days, amplifying conspiracy theories about the backing that the U.S. and its allies have provided for Ukraine in response to the Russian military assault.

Washington and NATO nations have rushed billions of dollars worth of weapons into Ukraine, including thousands of highly sensitive items such as shoulder-fired missiles called Man-Portable Air-Defense Systems (MANPADS). The supplies have brought angry complaints from Russian President Vladimir Putin and foreign weapon depots have been the target of a number of Russian missile strikes.

Pentagon officials acknowledge that some of the vast flow of arms could fall into the wrong hands in the chaos of war, but insist it was worth the risk because the weaponry so dramatically elevated the Ukrainian military’s ability to beat back invading Russian forces.

While dubious claims of weaponry diverted to black-market channels have appeared for months on social media, the claims reached new heights last week when a top Russian diplomat suddenly asserted that “MANPADS and anti-tank weapons” are being rerouted to Syria to be sold to shady buyers.

“There has been evidence that these weapons have already surfaced on the black market and are being shipped to the Middle East, and to Idlib, in particular,” Russia’s chief delegate to the military security and arms control negotiations in Vienna, Konstantin Gavrilov, told Russian media outlets.

According to Russia’s Tass News Agency, Mr. Gavrilov went on to warn that European nations facilitating the delivery of weapons to Ukraine are playing with fire. “After all, it can be used for terrorist purposes,” the diplomat said in an interview with Rossiya-24 TV.

When pressed about the claim this week, a senior State Department official familiar with U.S. weapons transfers told The Washington Times that the U.S. government is very closely monitoring allegations that weapons are being diverted and takes such allegations “very seriously.”

“We’re working closely with our Ukrainian government contacts to make sure our weapons transfers are safeguarded,” said the official, who spoke on condition of anonymity.

“Russia has a well-known history of disinformation, so these claims have to be viewed with skepticism,” the official added. “The Russians are trying to distract from their war in Ukraine.”

The Pentagon last week released an extensive fact sheet of U.S. efforts to help Ukraine wind down its strategic nuclear, biological and chemical weapons programs inherited after the country gained independence with the breakup of the Soviet Union in 1991. Officials acknowledged the fact sheet was put out in part because Russia and its allies were spreading false narratives regarding Kyiv’s record on weapons of mass destruction.

“Amidst its war of aggression against Ukraine, Russia seeks, with support from the People’s Republic of China, to undermine that work by spreading disinformation and sowing mistrust in the people and institutions all over the world that contribute to WMD threat reduction,” the June 9 Defense Department statement said.

Daniel Hoffman, a retired clandestine services officer and former Moscow station chief with the CIA, said the situation “smells like Russian disinformation” with the aim of trying to “induce the West to stop giving Ukraine the weapons that are keeping the Ukrainians in the fight against Russia.”

Mr. Hoffman, who writes a regular column for The Washington Times, suggested in an interview that claims put forward last week by the state-controlled Tass news service may even be tied to a more elaborate Russian disinformation operation.

“Based on my experience, I would not rule out the possibility that Russia makes this statement as a precursor to some third party under Russia’s control producing ‘evidence’ of said military equipment making its way to Syria,” he said. “Because that’s what they do.”

Another U.S. government source, who spoke on condition of anonymity, offered a similar assessment: “Is there a risk that the Russian can capture some of these weapons and use them for their own disinformation purposes? It is a combat zone, so yes, there is that risk.”

The State Department’s Bureau of International Security and Nonproliferation is closely tracking the prospect that weapons could be diverted out of Ukraine. The effort involves working closely with bordering countries to enhance their capabilities for identifying potential weapons smuggling, with a particular emphasis on MANPADS, such as Stinger missiles, as well as anti-tank Javelin missiles.

However, officials at the Pentagon have acknowledged that there are limitations to U.S. capabilities for tracking Javelins and Stinger systems once they’ve entered Ukraine.

“We track the deliveries to the border into Ukraine, and when the hand-off happens at the border patrol points of the Ukrainians, it’s up to them for how they move that equipment,” a senior Pentagon official told reporters in April as the Biden administration accelerated the pace of deliveries to Ukraine.

Washington is reported to have sent at least 5,000 Javelins and as many as 1,400 Stingers to Ukraine in recent months.

When pressed on whether U.S. officials were putting tracking devices on the systems because of concern that they could fall into the wrong hands, the Pentagon official responded bluntly: “We are not.”

Chinese state-controlled media outlets, meanwhile, have seized on the situation in what appears to be a coordinated effort to bolster Russian disinformation operations. Beijing has been wary of direct involvement in the Ukraine fight, but its state media organs have leaned heavily toward the Russian version of the invasion and of NATO’s supposed role in provoking the war.

On the same day that Mr. Gavrilov’s claims were circulated via Tass last week, China’s highly nationalist Global Times newspaper — a publication with close ties to the ruling Communist Party — ran an article beneath the headline: “Weapons sent by US and NATO may fall into dark net and even to terrorists, leading [to] widespread and unbearable cost.”

The article echoed unverified claims about Javelin missiles for sale on the covert corners of the internet and recycled Russian propaganda from April that had floated the bogus narrative that U.S. intelligence was training militants in Syria skilled in urban warfare for deployment to Ukraine. In some accounts, the Biden administration had even recruited Islamic State fighters to join the fighting.

China’s promotion of such disinformation fits within a pattern of efforts by Beijing to actively push pro-Russian narratives about the invasion of Ukraine while blaming the U.S. for the conflict.

Officials with the State Department’s Global Engagement Center, which is leading efforts to expose foreign propaganda operations, have warned about the pattern for months.

A spokesman for the center told The Times in April that Beijing’s efforts included Chinese state media reports and official statements promoting bogus claims that the Pentagon was operating a network of laboratories for developing biological and chemical weapons across Ukraine.

• Mike Glenn and Bill Gertz contributed to this report.