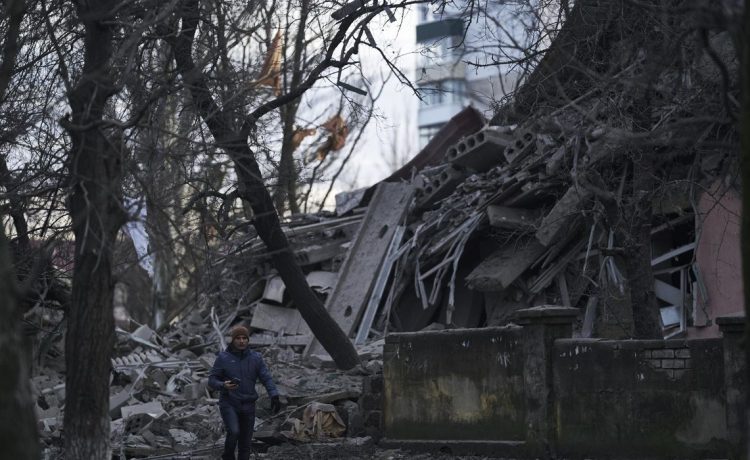 Russia’s 10-month-old invasion is leaving an enduring scar on Ukraine even beyond the lives lost, the homes, roads and factories destroyed and the cultural landmarks demolished.

The government of Kyiv said this month that an area of Ukraine slightly larger than the state of Georgia — about 60,000 square miles — is now virtually uninhabitable because of the deadly presence of landmines and other explosives, planted both in the frozen conflict dating back to 2014 and the hot war that has ravaged large swaths of the country since Russian forces invaded en masse in February.

Even after the guns are finally silenced and even if the last Russian soldier has been forced back across the border, the challenges Ukraine faces getting back to normal will staggering, experts say.

Countries around the world are offering support for Ukraine’s demining needs. U.S. officials expect it to be one of the largest such efforts since the end of World War II. Undertaking such a task is difficult enough during peacetime but seemingly insurmountable while the fighting is continuing.

“Clearing this explosive contamination is a top priority for the government of Ukraine,” said Michael Tirre, with the State Department’s Office of Weapons Removal and Abatement. “The sheer magnitude of explosive hazard and contamination is overwhelming.”

Since the start of the largest war in Europe since World War II, landmines and unexploded ordnances have killed or maimed more than 1,100 civilians by 2022, U.S. officials said.

Ukraine is one of the world’s top exporters of agricultural commodities like wheat, barley and corn, but at least 10% of the country’s agricultural lands have been rendered untillable since the invasion because of the presence of landmines and other explosives. A successful Ukrainian counteroffensive which has driven back Russian forces in the south and east has only served to put the problem in an even more glaring light.

“Russian forces in retreat have intentionally booby-trapped homes and civilian infrastructure. The consequences go well beyond the immediate danger to civilians and are far-reaching and potentially long-lasting,” said Demitra Pappas, an official with the U.S. Commission on Security and Cooperation in Europe, also known as the Helsinki Commission.

A Human Rights Watch survey this summer reported that Russian had deployed at least seven antipersonnel mine models in parts of Ukraine, including at least one fragmentation mine that had never before been reported in combat. Both sides have used anti-vehicle mines as well.

The human rights group noted that Russia, like the U.S. and China, has not signed the 1997 Mine Ban Treaty, but remains bound by mine, booby-trap and other device restrictions included in the United Nations Convention on Certain Conventional Weapons. Ukraine has signed the 1997 pact.

The International Committee of the Red Cross, in a report earlier this month, noted that mines were already a major problem for Ukraine in the clashes between the government in Kyiv and Russian-backed separatists in the Donbas region in the civil war begun in 2014. The first full winter of the current Russian invasion has only compounded the danger, the ICRC report warned.

The misery and destruction inflicted by such hidden threats are immense,” ICRC Eurasia Director Ariane Bauer, warned in the report. “Blasts can be fatal or cause injuries such as blindness, burns, damaged limbs and deep shrapnel wounds. In addition to the loss of life and injury, unexploded ordnance frequently hinders or prevents access to essential services like hospitals or they make repairs to water and power facilities unsafe or prolonged.”

The Biden administration is providing more than $91 million worth of demining assistance to Ukraine over the coming year to help with the humanitarian challenges posed by the explosive remnants of the war. About $47 million will go to Pasadena, Calif.-based Tetra Tech, Inc. which has been hired to help expand Ukraine’s ability to locate and remove the mines.

The first step is to establish a joint training facility that will allow the different government agencies in Ukraine to standardize and refine their training in clearing explosives and similar hazards.

“Once the conflict ends, the work will shift from reactionary to stabilization and then into long-term clearance activities,” Todd Biggs, Tetra Tech’s vice president for munitions response, said from Kyiv earlier this month during a demining briefing hosted by the Helsinki Commission.

Ukraine currently has more than 200 demining teams — about 1,000 personnel — and plans to double that figure next year. The teams have different specialties: Some conduct interviews with the public to find evidence of explosives while others do the actual work of clearing minefields and battle areas.

“The teams will also include explosive ordnance risk education teams that are critical for teaching civilians how to recognize, avoid and report hazards,” Mr. Biggs said. “There are not enough teams to adequately cover all high-priority areas.”

While they continue to kill and main innocent Ukrainian civilians, the explosive hazards left by Russian military forces also block access to farmland, impede reconstruction efforts, and prevent displaced people from returning to their homes.

U.S. and Ukrainian officials say that Russian troops have deliberately booby-trapped children’s toys and even the bodies of people killed by the invasion, in a style reminiscent of Islamic State terror operations in Iraq and Syria, U.S. officials said.

“ISIS terrorists sought to inflict as many civilians as possible and made people afraid to go home,” Mr. Tirre said.

Explosive experts said Russian munitions may have dud rates between 10% and 30%, meaning a massive amount of unexploded munitions could remain in the ground in Ukraine for years to come, U.S. officials said.

What they may lack in top-of-the-line equipment, the Ukrainian demining teams make up for with grit and expertise, international explosive experts said.

“The Ukrainian people are incredibly resilient [and] incredibly determined to resolve the problem,” said Tony Connell, with the Swiss Foundation for Demining. “I’ve never been in a country where the national staff is so determined to get rid of the problem.”

The lion’s share of the demining work in Ukraine is being done by local personnel, from police units to the military to the state emergency services.

“These incredibly brave and skilled Ukrainian demining and explosive ordnance disposal teams have found and destroyed more than 500,000 explosive hazards,” Mr. Tirre said. “Clearing this explosive contamination is a top priority for the government of Ukraine.”

Tetra Tech plans to deploy at least 100 demining teams into Ukraine by early 2023, a dramatic increase from the 22 teams that it was supporting at the start of the invasion. The company’s plan will create the only large-scale demining school operating within Ukraine. Other training typically happened outside the country.

“Ukraine has substantial expertise and our project is designed with this in mind,” Mr. Biggs said. “Ukrainian operators have experienced severe casualties. They urgently need this training and equipment.”

The demining course usually takes four to five weeks. The company recruits from the local population in the area where they intend to work. It doesn’t require any specialized background.

The local teams are taught how to recognize different mines, how to carry out excavation efforts, and first-aid training. A 10-person team will usually have an international team leader, a driver, a translator and the local staff as deminers.

The Ukrainians are appreciative of the demining help offered by the U.S. and other countries, but say that ultimately it’s their responsibility to complete the task, Mr. Biggs said.

“They definitely want to be in the lead. They want to fix the problem,” he said. “They don’t want to just rely on others doing it.”

It’s hard to determine how much it will cost to completely clear Ukraine of the explosive hazards because there is as yet been no national landmine survey. Mr. Biggs said he has seen estimates that the cost could amount to $73 billion.

When asked how long it could take, Mr. Biggs said, “Several decades.”