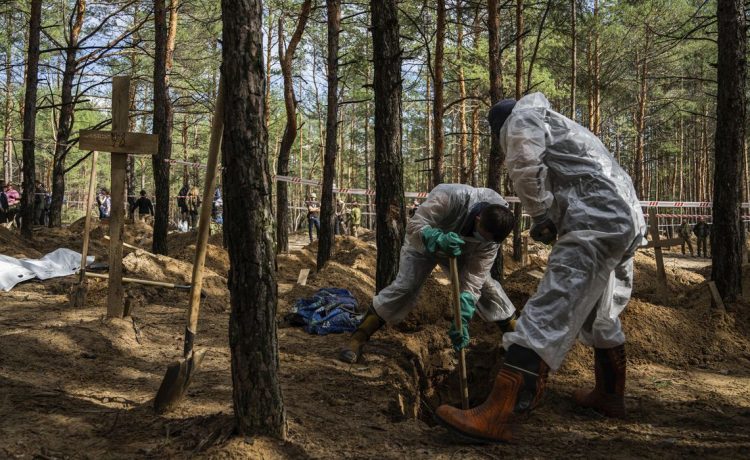 Russians living along the border with Ukraine are now experiencing some of the fear and uncertainty their Ukrainian neighbors have been enduring for the past nearly seven months, as Ukrainian gains on the battlefield in the east have some wondering if they will stop when they reach the border with Russia.

Residents in Russia‘s Belgorod region have taken to social media to express their fears that the invaders may soon become the invaded and their towns and villages could be menaced as the Ukrainian forces advance and Ukrainian missiles can reach ever deeper into Russian territory.

The Ukrainian counterattack centered on the Kharkiv region not only has retaken the largest Ukrainian city overrun by Russian forces in the early days of the war, but in some places in eastern Ukraine has advanced to within miles of the Russian border itself.

“They are firing within earshot. Are we getting bombed?” Natalia Lyovnia, whose village of Valuyki is just nine miles from the Ukrainian board, posted on the Russian social media site Vkontakte last week, the Moscow Times reported over the weekend.

Ukrainian missiles reportedly targeted the headquarters of the Russian 3rd Motorized Rifle Division based near Valuyki on Friday.

“We’re scared,” Olga Podtyolkova, a resident of the Russian town of Shebekino in the Belgorod region, said in another social media post.

Belgorod regional Gov. Vyacheslav Gladkov wrote on the social messaging service Telegram that one border town was being evacuated last week and two residents of a neighboring town had been wounded by shelling in the fighting.

Local Russian officials are urging residents to remain calm, and an annual festival marking the founding of Shebekino was slated to go forward on Saturday.

But questions continue to surface on social media by local residents about the possibility of more Ukrainian attacks, access to bomb shelters and whether Russia has the ground and air forces in the region to hold back a full-scale Ukrainian invasion.

The Ukrainian government has said it is fighting only to recover its sovereign territory, and has left open the question of whether its forces would enter into Russia itself in a bid to pressure the invading force to withdraw.

But fresh reports of alleged atrocities committed by Russian and Russian-backed forces in Izium and other Ukrainian cities once again controlled by Kyiv could inflame an already tense situation.

Ukrainian defense officials on Friday posted images online of what they said was a mass burial site in Izium. Ukrainian President Volodymyr Zelenskyy said the site contained more than 400 bodies, with some showing signs of having been tortured.

In his nightly address to the nation Saturday, Mr. Zelenskyy warned that Russia would be held accountable for documented acts of abuse, torture and executions in towns and cities its forces occupied. Mr. Zelenskyy mentioned another location, at the railway station in Kozacha Lopan, where he said “a room for torture and tools for electric torture was found,” the Associated Press reported.

Rights groups have condemned Russia‘s actions in the invasion, but many of Kyiv’s claims of abuse have yet to be independently verified.

The Ukrainian president compared the Russians to the Nazis during World War II. “And they will answer in the same way — both on the battlefields and in the courtrooms,” he said.

Russian President Vladimir Putin appeared to make a veiled threat to Ukraine not to step up operations or target sites inside Russia.

Russia‘s military had been “rather restrained” so far about what he called “Ukrainian terrorist acts and attempts to damage our civilian infrastructure,” Mr. Putin told reporters at a summit of the China-led Shanghai Cooperation Organization in Uzbekistan Friday.

But “more recently, the Russian armed forces have dealt a couple of serious blows” to the Ukrainian side, Mr. Putin contended, and a more severe response is possible.

Russian military bloggers, strong supporters of the original invasion but harsh critics of how the Russian military has fought the war so far, have been particularly critical of what they said was the Kremlin’s failure to strike back hard at Kyiv when sites and towns within Russia‘s own borders come under attack.

•This article is based in part on wire service reports.