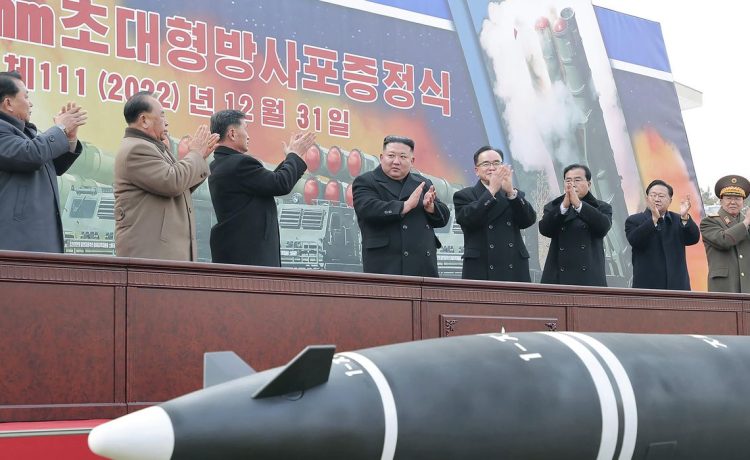 Russia’s invasion of Ukraine — a non-nuclear armed nation — has prompted North Korea to accelerate its own nuclear program and embrace a “first-use” nuclear weapons policy in a bid to deter an attack by the United States.

That’s a key conclusion of a new report from a leading U.S. think tank that highlights the Ukraine war’s impact on the stand-off on the divided Korean peninsula. Given recent events, the authors suggest, neither China nor Russia will be eager to support U.S. and South Korean efforts to prevent a seventh nuclear test by Pyongyang.

“Additional nuclear tests by North Korea would be unlikely to prompt a serious reaction from China and Russia,” argues the report released Thursday by the Center for Strategic and International Studies (CSIS).

The analysis comes as the Biden administration struggles to generate an effective deterrence policy toward North Korea in the face of a string of provocative weapons tests and military moves last year from Pyongyang. The regime of North Korean leader Kim Jong Un tested more ballistic and other missiles in 2022 than in any previous year, and U.S. intelligence has for months warned that a test of a new nuclear bomb — the first by the regime since 2017 — may be imminent.

The Biden administration has responded with economic sanctions and increased military coordination with both South Korea and Japan, while also calling on the Kim regime to rejoin diplomatic denuclearization talks that collapsed in the final years of the Trump administration.

President Biden has also publicly expressed hope that China — North Korea’s primary economic backer and main military ally — will pressure the Kim regime not to carry out a nuclear test. Critics say it is doubtful Beijing will work with Washington toward that goal.

The CSIS report warned that the region had reached a “critical juncture,” with Beijing and Moscow “now viewing Pyongyang’s provocations more as a means to gain advantages over Washington than a concerning threat to regional stability.”

North Korea, the report’s authors say, has shifted its own priorities, in large part in reaction to events of the past year. Russian  President Vladimir Putin could invade his smaller neighbor without fear of a nuclear counterattack, while the U.S. and its NATO allies have carefully limited their direct support for Kyiv for fear of a direct conflict with a nuclear-armed Russia.

“The war in Ukraine seems to have underscored for North Korea the importance of nuclear weapons for its security,” the CSIS report said. “Whether this is the correct conclusion or not, the regime reiterated its nuclear ambitions in April 2022, thereby decreasing prospects for denuclearization.”

“Since the start of the war in Ukraine, however, Beijing and Moscow have refused to enforce existing sanctions and vetoed any further actions against North Korea in the U.N. Security Council,” the authors wrote.

The report includes a series of recommendations for the Biden administration, including expanding so-called “secondary sanctions” targeting China and Russia if they do not enforce U.N. Security Council resolutions on North Korea.

Such sanctions could target Chinese and Russian banking and other entities that work with North Korea. Successive U.S. administrations have threatened such sanctions but have rarely attempted to enforce them.