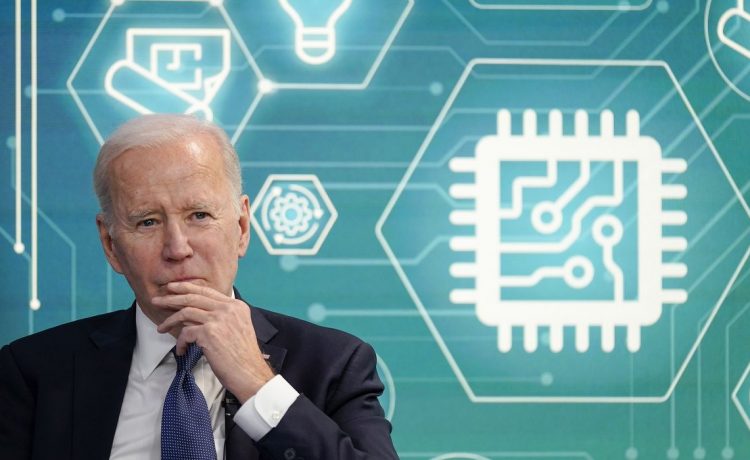 A $52 billion payout to semiconductor manufacturers cleared a key test vote Wednesday in the Senate, teeing up a legislative win for President Biden as time runs out before Congress takes its August vacation.

The long-stalled bill, which totals $280 billion of spending to boost technology development and compete with China, advanced in a 64-32 vote, overcoming the 60-vote hurdle required to survive in the upper chamber.

Final approval in the Senate is expected later this week.

Months of tense negotiations over partisan differences nearly derailed the legislation. But the final deal now stands ready to deliver a modest win to a White House and Democrats hungry for any sort of legislative victory ahead of the Nov. 8 midterm elections.

“We don’t mean to let the days of American leadership end on our watch,” Senate Majority Leader Charles E. Schumer, New York Democrat, said in a floor speech urging his colleagues to support the bill. “We don’t mean to see America become a middling nation in this century. We mean for America to lead this century.”

Proponents of the bill say it will reduce America’s dependence on China and resolve a major supply chain issue that has contributed to high inflation.

Without a steady flow of semiconductors, which are used to manufacture everything from washing machines to advanced weapons, proponents warn that the U.S. will be severely hobbled in maintaining economic stability in the future.

Administration officials have also laid out a national security imperative for the incentive, warning that the global supply of advanced chips is concentrated in Taiwan which many fear could be the epicenter of a clash with China within the next decade.

Opponents, including some Republicans and far-left icon Sen. Bernie Sanders of Vermont, labeled as “corporate welfare” the bill’s $52 billion of funding for the chip manufacturing industry.

Mr. Sanders has thrashed the bill which he said gives a “blank check” to already profitable chip manufacturers whom he accused of extorting Congress by threatening to build factories overseas if they do not get money.

“At a time when the working families of this country are falling further and further behind while the very rich are getting much richer, let us get our priorities right,” he said in a floor speech on Monday. ” Let us rebuild the U.S. microchip industry, but let’s do it in a way that benefits all of our society, not just a handful of wealthy, profitable and powerful corporations.”

Sen. Rick Scott, Florida Republican, called the bill a “reckless spending spree” with few safeguards in a letter to the editor of the Wall Street Journal.

“The bill contains no return-on-investment mandate or clawback provisions to keep grant recipients—massive corporations—accountable,” he wrote. “If Congress insists on spending, it better be done with accountability.”

The White House has, for weeks, been in a full-court press to get the measure passed, urging lawmakers to shed a bevy of tough-on-China measures to get the broadly supported CHIPS Act to his desk before industry heavyweights take their money elsewhere.

Commerce Secretary Gina Raimondo, who led classified briefings this month on Capitol Hill to drive home the national security imperative for domestic chip production, warns the U.S. is running out of time to woo chip manufacturers to its shores as other countries begin to rollout similar incentives.

Three major semiconductor firms — TSMC, Intel, and Global Foundries — recently warned that they will scale back plans to produce semiconductors if Congress can’t seal the deal.

“Congress must pass this bill as soon as possible,” President Biden said Monday during a virtual roundtable with CEOs and cabinet leaders who spoke of the economic and national security imperative of getting the bill through.

“Listen to the business leaders here today and across the country,” he said. “They’re making decisions right now about where to invest and ramp up production of these semiconductors. Are they going to invest in China, India, Japan, South Korea, the European Union? The United States has to lead the world in the production of these chips.”

The $52 billion incentive remained tied up for months in House and Senate negotiations over the final version of a behemoth China competition bill.

The Senate’s $250 billion U.S. Innovation and Competition Act or USICA passed last June with the support of 18 Republicans and 50 Democrats.

Lawmakers made little progress in wading through the slew of provisions included in House and Senate versions of broader bills, despite the chips incentive remaining as one of the more palatable provisions for Republicans included in both measures.

With time running out before both the House and Senate adjourn for a monthlong recess in August, the White House urged lawmakers to strip the funding from the larger package and pass it separately, despite removing a key bargaining chip for Democrats to get the remaining bevy of tough-on-China measures across the finish line.

The solution was to introduce a “Chips-plus” bipartisan bill with includes more than $50 billion over the next five years for chip manufacturing and a 25% tax credit through 2026 for new chip production.

Once approved in the Senate, the bill will require final passage in the House before proceeding to the president’s desk.

The bill is expected to sail through the House where it is supported by the top Republicans on the House Foreign Affairs, Intelligence and Homeland Security Committees.

Rep. Michael T. McCaul, a Texas Republican who was the original sponsor of the bill, cheered the Senate’s progress on the bill and urged his House colleagues to follow suit.

“It’s been a long process, but this important legislation will ensure we manufacture advanced semiconductor chips — the brains behind our most advanced technology today and the technology of tomorrow — right here in America. NOT in China,” Mr. McCaul said.

House Speaker Nancy Pelosi, California Democrat, has pledged to shuttle the bill quickly through the House once passed by the Senate.