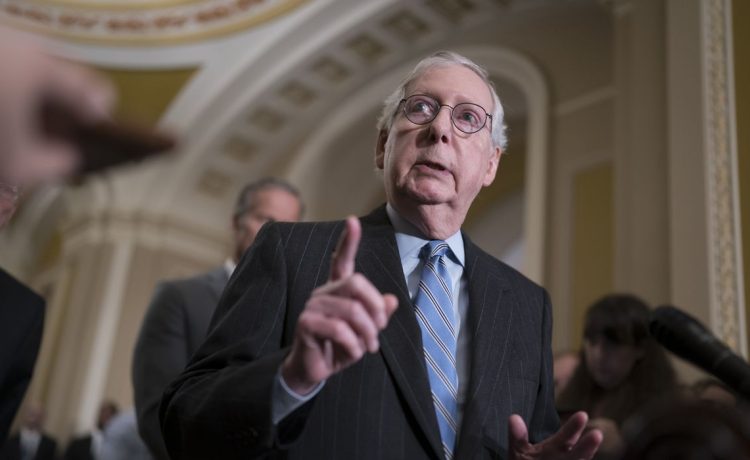 Senate Republicans critical of Minority Leader Mitch McConnell are giving him a pass for agreeing to appear with President Biden at an event promoting the White House’s infrastructure law.

“The leader can do whatever he wants with his time, it’s not my prerogative,” said Sen. Ron Johnson of Wisconsin.

Mr. Johnson was one of 10 GOP senators to oppose Mr. McConnell’s bid for another term as GOP leader late last year. However, he declined Tuesday to criticize Mr. McConnell’s decision to make a joint appearance with Mr. Biden.

The White House has billed Wednesday’s event, which will take place in Mr. McConnell’s home state of Kentucky, as proof of the president’s commitment to bipartisanship. It will largely focus on the benefits of the White House’s $1.5 trillion infrastructure package that passed only because of support from Senate Republicans like Mr. McConnell.

Some conservatives say, however, the event is to serve as little more than a “publicity stunt” for Mr. Biden.

Mr. Biden’s sojourn to Kentucky with Mr. McConnell comes as House Republicans are set to meet for a second day to choose a speaker.

Democrats are likely relishing images of the House paralyzed by GOP infighting juxtaposed with those of Mr. Biden standing with the top Senate Republican to laud a bipartisan win.

“Biden is absolutely sending a message to the American people that there are people you can trust to govern,” said a Democratic insider. “And then there’s the House Republican caucus.”

Mr. McConnell’s decision also comes after the minority leader helped the White House pass a $1.7 trillion budget bill late last month funding the government until at least the end of September. His support for the spending deal came despite the vehement opposition of the majority of the Senate GOP.

Overall, 29 of 50 Senate Republican lawmakers voted against the measure. Many argued that it was unfair to pass a spending bill in the lame-duck period when voters had opted to elect a Republican majority in the House during the midterm elections.

Yet some of the GOP lawmakers who opposed Mr. McConnell on the spending bill said they had no issue with his decision to appear in public with Mr. Biden.