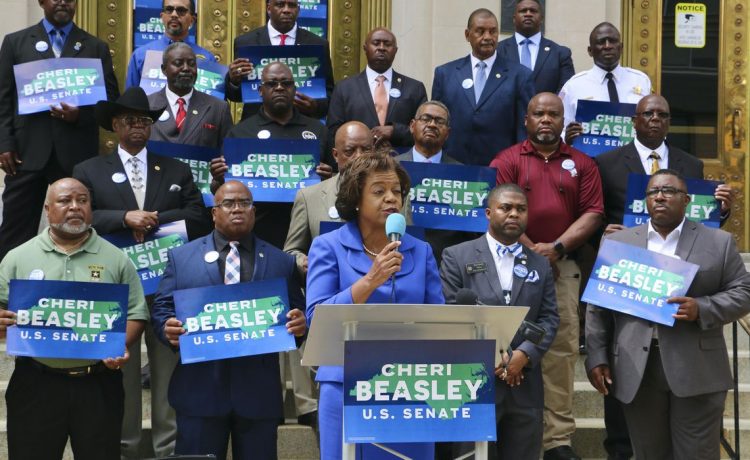 CHARLOTTE, N.C. — President Biden is making life difficult for Cheri Beasley as she looks to fire up the base in her race against Republican Ted Budd for an open U.S. Senate seat.

Ms. Beasley has been credited with running a disciplined campaign and focusing on her strengths as a candidate. Over the homestretch of the contest, however, she is falling back on a closing message that is proving to be a tough pill to swallow for voters feeling downtrodden and battered by high inflation and other economic troubles.

“All of us have people around us who are not voting,” Ms. Beasley said at a recent “Souls to the Polls” event here outside a local barbershop. “Folks need to feel a sense of urgency.”

Republicans say the argument is laughable considering Mr. Biden and Democrats have called the shots in Washington the last two years, presiding over soaring inflation that is estimated to cost families thousands of dollars a year.

“As usual, Beasley’s talking points are based on delusion and not backed up by facts,” said Budd spokesperson Samantha Cotton.

Paul Shumaker, a North Carolina-based GOP strategist, said the reality is Democrats are struggling to convince voters not to lose faith in their ability to improve their day-to-day lives.

“Democrats have a severe turnout problem and they know it,” Mr. Schumacher said. “And they know the head of their party is not capable of closing the deal for them because of his low approval rating.”

The problem, he said, is warnings things are going to get worse under Republicans is a tough sell.

“They have an alternative message: Who is better to fix the economy than those who screwed it up?” he said.

Ms. Beasley has kept Mr. Biden at arm’s length. She is focused on bringing down the rising costs of prescription drugs, health care and housing. as well as protecting abortion rights now that the Supreme Court overturned Roe v Wade.

Mr. Budd is an “extremist,” she says, accusing him of twisting her record on the bench and “fearmongering” for votes. She claims he is in the pocket of Big Pharm and Big Oil and wants to ban abortion.

For his part, Mr. Budd, who has a conservative record, presents himself as an ordinary Republican since capturing the party’s nod with the help of former President Donald Trump’s endorsement, who rewarded him, in part, for voting against certifying the results of the 2020 election.

Mr. Budd is focused on the inflation-related challenges voters across the state are facing — higher prices for groceries, clothes, and energy bills — and keeping concerns about crime, immigration, and education front and center.

Mr. Budd says Ms. Beasley will be a rubber stamp for the same Biden policies that he blames for the nation’s problems. He says she does not want any limits on abortion.

Ms. Beasley locked up the support of the party apparatus early on and has outraised Mr. Budd by over $18 million.

Still, Mr. Budd has consistently led in the polls. He has a 4-point lead roughly a week out from Election Day, according to the Real Clear Politics average of recent polls.

The most recent survey of the race from Marist polling showed 38% of registered voters approve of Mr. Biden’s job performance, while 56% disapprove.

The disapproval numbers cut across partisans lines and include 93% of Republicans, 58% of Independents and 15% of Democrats.

Plus, 34% of black voters and 52% of white college graduates give Mr. Biden a thumbs down.

Former President Barack Obama has tried to pick up the slack, urging voters to resist the temptation to “tune out.”

Mr. Obama, who narrowly won North Carolina in 2008, endorsed Ms. Beasley in a video last week. The Beasley campaign is broadcasting Mr. Obama’s endorsement statewide. “In the Senate, Cheri will fight to make health care and prescription drugs more affordable and protect our fundamental rights, from the right to vote to a woman’s right to control her own body,” Mr. Obama said. “This is going to be a close race, and we can’t afford to get it wrong.”

Rep. Alma Adams resurrected the Obama “Fired up, Ready to Go!” slogan at the “Souls to the Polls” event with Ms. Beasley.

Ms. Adams also framed the race in racial terms, saying the GOP plans to push policies that are “going to set us back.”

Voters here in 2008 not only helped Mr. Obama win the White House but also elected Sen. Kay Hagan, who lost her seat in 2016.

Since then Democrats have been blanked in federal statewide races, including in 2020 when Cal Cunningham’s promising campaign unraveled after he admitted to an extramarital affair.

Ms. Beasley gave Democrats a glimmer of hope that more than two decades of public service and profile dovetails well with the state’s large minority populations and the influx of highly educated, left-leaning, transplants.

Ms. Beasley is working this week to fire up the base.

She appeared with Alex McGill Johnson, president of Planned Parenthood Action Fund, at a campaign stop focused on the need to protect abortion access after the Supreme Court’ rescinded the nationwide abortion rights and kicked the issue back to state legislatures.

Dozens of supporters cheered and chucked after she took the microphone at the “Souls to the Polls” event and danced to Beyonce’s “Break My Soul” in a light rain.

Betty Howell Gray, president of the North Carolina chapter of the National Alliance of Black School Educators, said has been working with local churches to get more voters engaged and draw more attention to issues such as the need for more affordable housing, health care, and stronger schools.

“I know that it is tight now, but I am praying about that, and I believe in hope and prayer,” Ms. Gray said. “We are trying to get people out.”

But she said that the energy level for Democrats is low and the party’s turnout is low for early voting that’s been underway since Oct. 20.

“I guess people now are somewhat hopeless, they think it doesn’t matter, but it does matter,” Ms. Gray said.