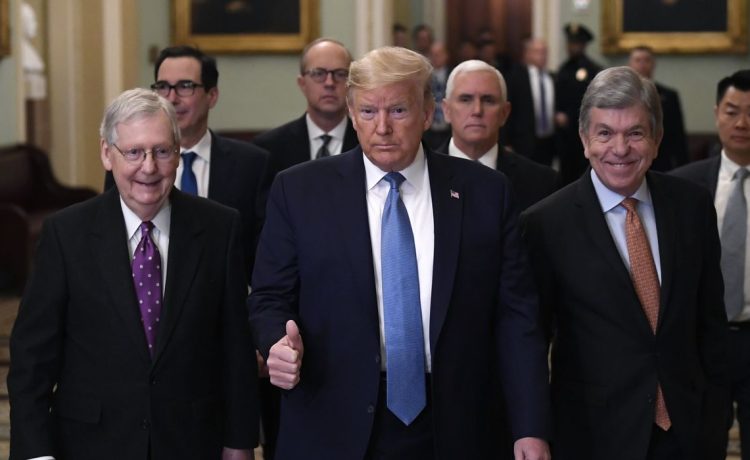 Republicans were supposed to be celebrating a blowout but instead were finger-pointing at GOP leaders — Mitch McConnell and Donald Trump — after big wins for the party never materialized and the Senate was declared safely in Democratic hands for another two years.

A group of angry Senate Republicans is mounting a last-minute challenge to halt their party’s leadership elections scheduled for Wednesday. They are gathering signatures on a letter demanding a delay in the wake of the midterm fiasco.

It could jeopardize the political future of Mr. McConnell, 80, who is seeking a ninth term as the chamber’s Republican leader.

Disgruntled Republicans plan to make a “robust” challenge to the quick election schedule when GOP senators meet behind closed doors on Tuesday, an aide told the Washington Times.

“We are all disappointed that a Red Wave failed to materialize, and there are multiple reasons it did not,” the Senators said in a letter they are circulating which was obtained by The Times. “We need to have serious discussions within our conference as to why and what we can do to improve our chances in 2024.”

Another faction of Republicans blamed Mr. Trump, 76, who has been urged by some in his party to postpone his planned announcement Tuesday of a third White House bid.

The former president endorsed a string of “MAGA” candidates in critical Senate and governor’s races, and most of them lost, including Republican Senate candidate Adam Laxalt in Nevada.

Mr. Laxalt was defeated by Democratic incumbent Sen. Catherine Cortez Masto late Saturday and his loss pushed the majority out of reach for the GOP.

“Those who are most closely aligned with the former president underperformed,” Sen. Bill Cassidy, a Louisiana Republican, told NBC’s “Meet the Press” on Sunday. “Those who are talking about the future, or who had managed their states well, they over-performed.”

Mr. Cassidy said the election results signal the party should be looking for new leaders other than Mr. Trump. Rather than being “closely aligned with the past,” he said, “our party should be pointing to the future.”

For Democrats, the GOP infighting was a bonus to an election that they said validated their call for voters to reject Mr. Trump and his candidates.

After the Nevada race was called, Senate Majority Leader Charles E. Schumer of New York said that the Democrats’ win was a “vindication of our agenda.”

“I will once again be majority leader,” Mr. Schumer said in New York. “The American people rejected the anti-Democratic, extremist MAGA Republicans.”

Mr. Cassidy is among several prominent Republicans calling for the party to look past Mr. Trump in 2024 as the GOP reels from disappointing election results.

But Mr. Trump has ignored calls to delay his planned 2024 announcement.

He’s blaming election losses on Mr. McConnell, a longtime political foe who he called “a disaster for the Republican Party and the country,” on his Truth Social media site.

Senate Republicans were on the cusp of retaking the majority, but those hopes were dashed on Saturday when the Senate election in Nevada was called in favor of Ms. Masto.

The two losses relegate Republicans to the Senate minority again in January, despite an unfinished race in Georgia, where Republican Herschel Walker, another Trump-endorsed candidate, faces Democratic incumbent Raphael Warnock in a Dec. 6 runoff.

Hours after losing the bid for a Senate majority, Sen. Rick Scott of Florida, the head of the GOP’s Senate campaign arm, led the charge against GOP leadership, but not Mr. Trump.

Mr. Scott told a Sunday talk show that next week’s leadership elections should be postponed so Republican Senators can reconsider whether to elect Mr. McConnell and his leadership team.

Mr. McConnell, Kentucky Republican, has been criticized by Mr. Scott and others in the Senate Republican Conference for refusing to put forward a GOP agenda to attract more voters ahead of the election.

“The leadership in the Republican Senate says, ‘No, you cannot have a plan. We’re just going to run against how bad the Democrats are.’ Actually, they cave in to the Democrats,” Mr. Scott told Fox Business’ Maria Bartiromo.

Mr. Scott, along with Sens. Marco Rubio of Florida, Cynthia Lummis of Wyoming, Mike Lee of Utah, Ted Cruz of Texas, and Josh Hawley of Missouri all back the GOP letter seeking to postpone the conferences leadership elections until after the Georgia runoff.

The runoff no longer offers the GOP a chance to regain the majority, but Mr. Scott and Sen. Ron Johnson of Wisconsin said the leadership elections should wait until December to give lawmakers time to examine their missteps and await the results in Georgia as well as the uncalled Alaska Senate race between Republican incumbent Lisa Murkowski and her more conservative GOP opponent, Kelly Tshibaka.

“They want to rush through an election because they don’t want to do any assessment of what we’ve done wrong,” Mr. Scott said. “Insanity is doing the exact same thing and thinking you’re going to get a different result. We won’t.”

Mr. Cruz said GOP lawmakers “need to hear a specific plan for the next 2 yrs from any candidate for leadership.”

Mr. Johnson, a Republican who won reelection to a third term on Tuesday by a single percentage point, told Fox News’ “Sunday Morning Futures” that it would be “preposterous” to hold leadership elections on Wednesday. Mr. Johnson blamed midterm losses on the GOP leadership’s failure to keep the party unified against President Biden’s $1.2 trillion infrastructure spending legislation, which helped trigger high inflation.

“We had a number of our colleagues join Democrats, spending like drunken sailors,” on the Biden infrastructure bill, Mr. Johnson said.

Supportive Republicans argued the legislation would be popular with voters.

“That obviously was not a winning message or winning agenda,” Mr. Johnson said. “That was a losing message, a losing agenda, and we need to discuss that internally. We need to have thorough discussions internally.”

Republicans distanced themselves from Mr. Scott after he unveiled a proposed GOP agenda that called for sunsetting entitlements including Social Security and Medicare. While Mr. Scott insisted the plan was aimed at keeping the programs solvent, Democratic campaign ads claimed the GOP was planning to end or cut back the two popular programs for retirees.

Sen. Lindsey Graham, a South Carolina Republican, also provided Democrats with campaign fodder when he introduced legislation to ban abortion after 15 weeks even though it was clear Democratic voters were energized by June’s Supreme Court ruling overturning the 1973 decision that legalized abortion nationwide.

Mr. McConnell has stayed quiet amidst the criticism of his leadership. His aides did not immediately respond to an interview request.

He’s likely to maintain the backing of the GOP conference unless Mr. Johnson and Mr. Scott muster significantly more support for delaying the elections.

Sen. Tom Cotton, an Arkansas Republican, said Sunday he will vote to reelect Mr. McConnell as the GOP leader and pointed out that no other senator has stepped up to challenge him for the job.

“I think it’s better we move forward with these elections so we can focus on the Georgia runoff,” Mr. Cotton said on CBS’s “Face the Nation.”

On Truth Social, Mr. Trump called for a do-over in Arizona, where vote-counting machines at some polling places malfunctioned on Election Day.

“Idiot, and possibly corrupt, officials have lost control of the tainted election in Arizona,” Mr. Trump said. “MACHINES BROKEN IN REPUBLICAN AREAS. A NEW ELECTION MUST BE CALLED FOR IMMEDIATELY!”