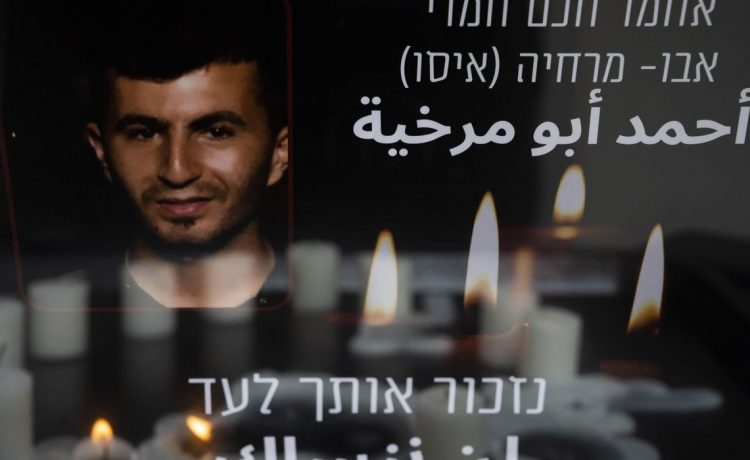 JERUSALEM (AP) — The severed head and decapitated torso of a 25-year-old Palestinian were discovered on the side of a road in the occupied West Bank, police said Friday, confirming gruesome details of a killing that shocked Palestinian society.

But accounts that the victim, Ahmad Abu Murkhiyeh, was a gay man who feared persecution for his sexuality and had sought asylum in Israel two years ago turned the terrible crime into a socially and politically explosive case.

It was unclear how Abu Murkhiyeh wound up in Hebron, the conservative West Bank city that he had reportedly fled. Palestinian police officials told The Associated Press on Friday that Abu Murkhiyeh’s head and torso were found near his family’s house.

Col. Loay Irzekat, a police spokesman, said authorities arrested a Palestinian acquaintance of Abu Murkhiyeh as a suspect in the killing, but declined to ascribe a motive or elaborate on their relationship pending the investigation.

Palestinian social media was gripped by the grisly killing, but silent on the question of Abu Murkhiyeh’s sexuality. Homosexuality remains deeply taboo in the Palestinian territories, where traditional norms play a prominent role in social and political life.

Still there was plenty of outrage across the West Bank. Graphic footage taken by Palestinian youths who happened upon Abu Murkhiyeh’s dismembered body on a hillside rippled through WhatsApp groups, provoking shock and horror, before being taken down.

“This is a very ugly crime,” an older relative, also named Ahmad Abu Murkhiyeh, told the Palestinian radio station Al Karama. “Such a thing should not be discussed.”

Abu Murkhiyeh’s family released a statement of mourning, offering blessings and asking for privacy after “this heinous, unprecedented crime that shook the homeland.”

The family claimed that Abu Murkhiyeh lived and worked between Hebron and neighboring Jordan, where his late father was from.

As news of Abu Murkhiyeh’s death spread, a starkly different version of events emerged from Israel. LGBTQ organizations and emergency shelters helping gay asylum seekers said they knew he was gay and desperate to escape the Palestinian territories, where he was a target.

“He told me people not only in his family but in the village wanted to kill him,” she said, adding that he fled to Israel as word of his sexual orientation spread through Hebron two years ago. “He was scared of his brothers, his uncles, his cousins.”

Abu Murkhiyeh bounced around from shelter to shelter and scraped by on occasional restaurant jobs in Tel Aviv, Petrenko said, while she helped him apply for resettlement to Canada.

He had no prospects in Israel. On temporary status, he was barred from working until last July, when Israel started granting work permits to Palestinians who have sought refuge due to violence and persecution for their sexual orientation, Petrenko said.

“The situation was horrible for all of them,” said Ibtisam Mara’ana-Menuhin, an Arab member of the Israeli Knesset who petitioned the Supreme Court to grant gay Palestinian asylum seekers work visas.

Israel frequently promotes its tolerance on issues of sexual orientation, despite the rejection of homosexuality in ultra-Orthodox Jewish communities. But Tel Aviv is proud of its reputation as a top destination for gay and lesbian travelers.

Critics accuse Israel of “pink-washing,” saying it uses such tolerance as a way to divert attention from its open-ended occupation of the West Bank, now in its 56th year, and its harsh policies toward the Palestinians.

Just hours before Abu Murkhiyeh was killed on Wednesday, he spoke to volunteers at his shelter in Tel Aviv for a regular check-in, Petrenko said. Nothing was amiss. The next day, the story of his beheading dominated the media.

From Tel Aviv, there was an outpouring of anguish.

“We are heartbroken … will always remember you, Isu,” said Elem, a group that helped Abu Murkhiyeh, addressing him by a nickname. “We will never stop fighting so that others like you can live freely like any other human being.”

At the shelter where he most recently stayed, staff lit a candle for Abu Murkhiyeh during a solemn vigil Friday.

Petrenko said she had no idea how he turned up in Hebron. “He never felt safe,” she said.

Gay Palestinians tend to be careful for fear of drawing unwanted attention from their socially conservative community and backlash from authorities. Palestinian Authority police in 2019 barred gay and transgender rights group from holding events in the West Bank and threatened to arrest participants.

Gay people within Israel’s Arab minority have also faced violence and ostracism in their communities.

West Bank Palestinians like Abu Murkhiyeh have long have crossed into Israel to live openly. There are nearly 100 such Palestinians living under asylum, said Mara’ana-Menuhin, the lawmaker, but the number is likely far higher.

“It’s not that these people even come out of the closet. They’re found and they’re hunted,” said Hila Peer from Aguda, an Israeli LGBTQ rights organization. “Ahmad’s case is just another example of how bad the situation is and how seriously dangerous it is.”