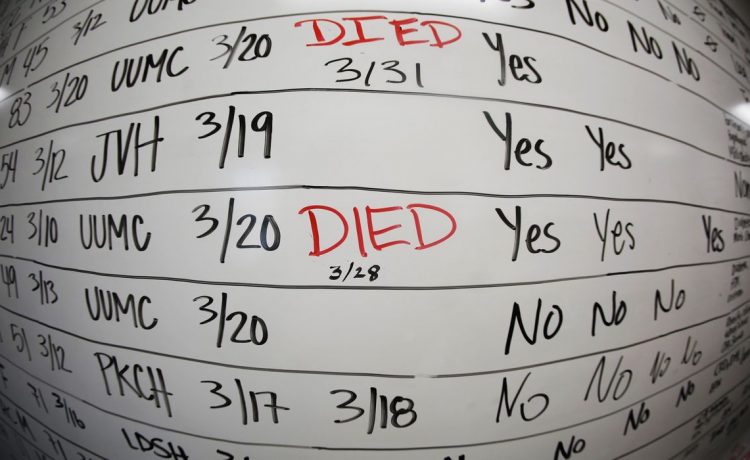 COVID-19 death rates in 2020 were lower in smaller metropolitan areas than in both inner cities and rural counties, according to government data released Tuesday.

In 2020, the age-adjusted death rate for COVID-19 was highest in large central metropolitan areas, the Centers for Disease Control and Prevention reported. In those counties, where more than 1 million residents live within the same city limits, 97.7 out of every 100,000 people died from COVID.

That was 30% higher than medium-sized metropolitan counties with 250,000 to 999,000 residents, where the rate of 75 deaths was the lowest, according to a data brief from the CDC’s National Center for Health Statistics.

The CDC breakdown offers “a more precise analysis” of COVID death rates than a broad comparison of rural and urban areas, according to a summary of the findings.

“For both males and females, death rates were lowest in smaller urban areas, such as the large fringe metropolitan and small or medium metropolitan areas,” the data brief states.

The CDC found Americans of all ages and genders living in rural counties were more likely to die of COVID than those in most metropolitan areas.

In large fringe metro counties where more than 1 million people live in suburbs, the death rate was 79.9. It was 78.2 in smaller metro areas with populations under 250,000.

“Medical care often is more distant in rural areas,” Dr. Schaffner said. “In addition, the age structure often is older and certain underlying medical conditions such as diabetes along with lung and heart disease may be more common in rural areas.”

COVID vaccination rates have also been “substantially lower” in rural areas than in urban areas, he added.

“In the early days of COVID-19, urban areas were first to be impacted, and their hospitals were inundated,” said Dr. Adalja, an infectious disease specialist. “It’s unclear why certain rural areas also experienced high death rates in 2020 but it may have to do with the prevalence of comorbidities, hospital density or other variables.”

Dr. Panagis Galiatsatos, a physician at the Johns Hopkins School of Medicine, said the report shows the need for inner cities to stock up on face masks for future pandemics.

“The proper masks, when worn properly, are effective against the spread,” Dr. Galiatsatos said. “In urban areas, where some homes have multiple tenants or are multi-generational, having masks allocated would help, especially since many struck with COVID could not abide by the lockdowns due to their occupation necessitating them to come into work.”