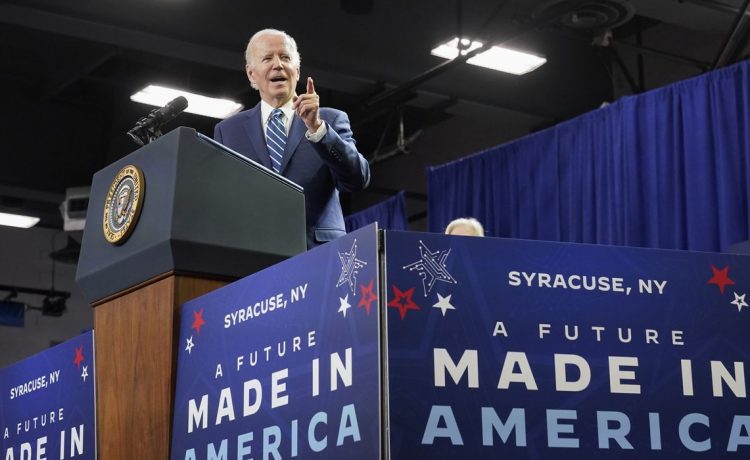 The highest mortgage rates in 20 years, high inflation and the biggest interest-rate hikes in three decades were dimming hopes for an economic rebound Thursday despite a third-quarter report that showed the economy growing for the first time this year.

The nation’s GDP rose 2.6% after two straight quarters of contraction, the Bureau of Economic Analysis reported, citing higher exports and increases in consumer and government spending.

The report, one of the last major economic measures before voters head to the polls in the Nov. 8 midterm election, offered a glimmer of hope for President Biden and Democrats. Mr. Biden has been walloped in polls amid persistent inflation and consistently gloomy economic forecasts.

At a stop later in Syracuse, New York, to hail a new Micron semi-conductor plant, the president said American families “have more net worth today than they did before the pandemic.”

“And although it may not feel like it for everyone, people’s incomes went up last quarter more than inflation went up,” Mr. Biden said.

Economists say the third-quarter bump masks underlying economic weaknesses and will likely be temporary. Investors still fear slowing growth in the fourth quarter and a downturn or recession in 2023.

The third-quarter GDP gain “looks impressive, but it was entirely due to a 2.8-point boost from net external trade,” wrote Paul Ashworth, chief North America economist at Capital Economics. He said a better measure of underlying economic demand is final sales to domestic purchasers, which rose at an annual rate of just 0.1%, “the worst showing since the second quarter of 2020 when the pandemic struck.”

Like many economists, he expects a mild recession to begin in the first half of 2023.

Driving those concerns is a housing slowdown.

Mortgage rates this week exceeded 7% for the first time since April 2002, with the average 30-year fixed mortgage rate hitting 7.08%, up from 6.94% the week prior, according to Freddie Mac.

As a result, home sales have fallen to the lowest level in 15 years.

“Home shoppers are hamstrung by the rising cost of homeownership and inflation which has led many to drop out of the market as shown by September’s 23.8% drop in existing home sales year-over-year, the eighth month of decline in a row,” Realtor.com reported.

Applications for mortgages have hit the slowest pace since 1997, said Joel Kan, vice president and deputy chief economist at the Mortgage Bankers Association.

Mortgage rates have risen as the Federal Reserve raises interest rates to curb inflation which climbed to an annual rate of 9.1% in June, the highest since 1981. The Fed has already raised its benchmark federal funds rate four times this year, the largest series of hikes in more than 30 years, although inflation has eased only slightly, to a rate of 8.2% in September.

Stock trading was mixed Thursday as investors prepare for next week’s Fed meeting when the central bank is expected to raise its benchmark federal funds rate by another 75 basis points. The Dow Jones Industrial Average rose 0.6% but the Nasdaq and the S&P 500 closed lower.

High prices have eroded wage gains, with families forced to pay more for gasoline, groceries, housing and other expenses.

Republicans, who have blamed the White House and Democrats for stoking inflation with massive government spending, pointed to signs of overall weakness in growth and dark clouds ahead. The third-quarter report also showed that consumer spending on goods declined, and businesses cut capital spending on buildings.

“Too many families are falling further behind and feel stressed about the future because of Democrats’ weak economy and record-high prices,” said Sen. John Barrasso, Wyoming Republican. “Republicans are united in undoing the Democrats’ failed economic policies and growing our economy once again.”

“A major surge in exports and government spending produced a fleeting positive number — ‘ghost growth’ — while the key drivers of the economy such as investment and consumer spending shrunk again,” Mr. Brady said. “These are alarming red flags for the current stagnant economy, signaling the worst is yet to come. Many economic experts predict America’s economy will shrink this year and contract more next year as inflation crushes workers with the largest pay cut in 25 years and families have seen their retirement nest eggs shrink by a quarter in just the past year.”

Democrats said the GOP was hoping for a weaker economic report to bolster their midterm election prospects.

“Republicans are desperately trying to convince you we’re in a recession,” tweeted Rep. Gerry Connolly, Virginia Democrat. “But the truth is our economy is growing, with a 2.6% increase in GDP during the third quarter this year. Republicans lie. The numbers don’t.”

• Joseph Clark contributed to this report.