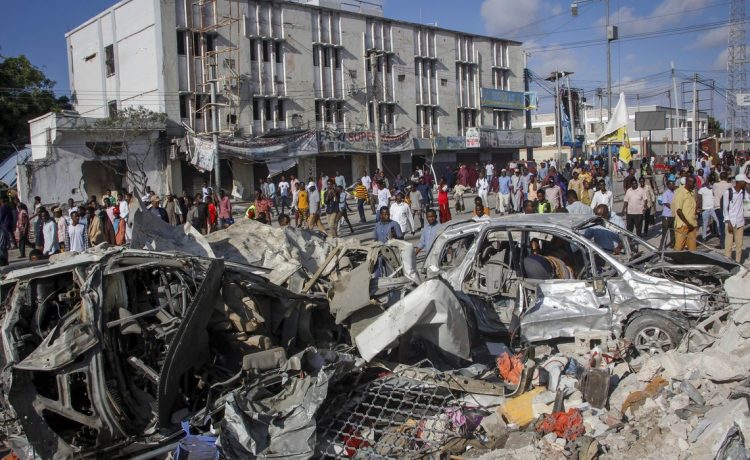 Somalian President Hassan Sheikh Mohamud warned Sunday that the death toll could rise after at least 100 people were killed and nearly 300 others wounded in car bomb attacks in a busy marketplace near the country’s education ministry.

The al Qaeda-linked terror group al-Shabab claimed responsibility for Saturday’s twin blasts in Mogadishu, the deadliest since a truck bomb killed more than 500 people in October 2017.

“Our government and brave people will continue to defend Somalia against evil,” he posted in a Twitter message.

The twin blasts happened within minutes of each other. The first occurred outside the Ministry of Education and the second went off as medical personnel arrived to treat the victims at the scene.

Al-Shabab said it targeted Somalia’s education ministry because it was an “enemy base” that receives support from non-Muslim countries and is “committed to removing Somali children from the Islamic faith,” the Associated Press reported.

Mr. Mohamud asked for international medical help to deal with the attack’s aftermath.

“Our thoughts are with the people in Somalia and we send our deepest condolences to the affected families,” Dr. Tedros Adhanom Ghebreyesus, director general of the World Health Organization, said in a Twitter post. “WHO is ready to provide support to the government, to treat the injured, and provide trauma care to the victims.”

Somalis searched through overwhelmed hospitals in Mogadishu for any sign of unaccounted-for family members who were thought to have been in the area at the time of the explosions. Bystanders said the first explosion hit an area where street vendors and money changers were working.

“I couldn’t count the number of bodies on the ground due to the [number of] fatalities,” eyewitness Abdirazak Hassan told the AP. The blasts demolished a number of vehicles in the area.

U.S. embassy officials in Somalia said they condemned the “cowardly” bombings and reaffirmed their support for the people and government of Somalia.

“As al-Shabab loses on the battlefield, it continues to attack Somali citizens,” the embassy said in a statement.