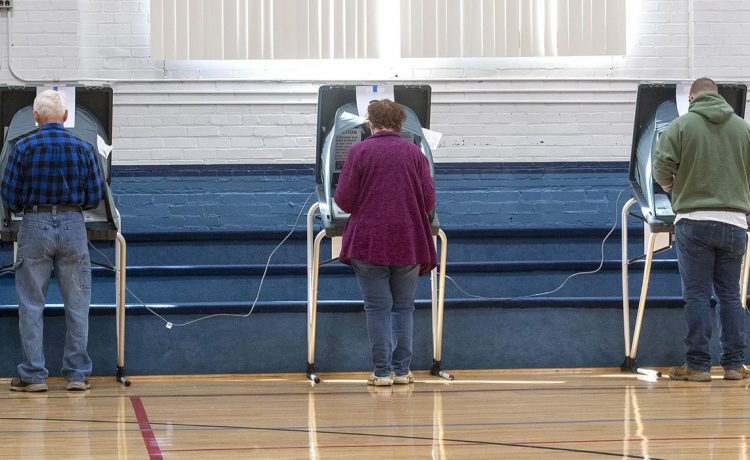 NASHVILLE, Tenn. — Election officials said Tuesday that some Tennessee voters have cast ballots in the wrong congressional district in Nashville – a city that Republican lawmakers carved three ways during redistricting in hopes of flipping a Democratic seat.

At least one precinct has been affected, which includes the 7th Congressional contest that pits a Black Democratic candidate, Odessa Kelly, against Republican U.S. Rep. Mark Green.

Some voters relied on interactive maps from the comptroller’s office and the Legislature, only to find later that the secretary of state’s office lists them as in the 6th District.

That means an unknown number of voters have cast ballots in the wrong congressional race, said Davidson County election administrator Jeff Roberts. The county office, which oversees Nashville, was only made aware of the issue Tuesday after being alerted by The Associated Press. Early voting has been ongoing for nearly two weeks.

“At this point in time, there’s no way for us to know, the ballots that were cast, who cast those ballots,” Roberts said. “We can’t undo what has already been done out there.”

Roberts said the issue is a result of a voting precinct that was divided under the redistricting map, splitting the voting area between the 6th and 7th congressional districts. Some voters in the 7th were grouped wrongly with the 6th. More than 1,350 voters live in the precinct.

“Mistakes happen,” Roberts said, adding that he was unsure if the same problem was happening in other precincts.

He promised that the issue would be resolved by Election Day, which is Nov. 8. Until then, the county is currently working up a plan on what poll workers should tell voters as early voting continues, Roberts said.

Julia Bruck, a spokesperson for the secretary of state’s office, told the AP that the information on the state’s GoVoteTN app is submitted from each individual county and “relies on accurate information from the local election commissions.” Bruck said the office is not aware of any other issues elsewhere.

Kelly’s campaign treasurer, Anna Carella, was hoping to cast a ballot for her boss. She relied on the comptroller’s website, which said she was in the 7th District, and for weeks she thought she would be able to vote for Kelly. But when she went to vote early, poll workers handed her a ballot that included the 6th District race, Carella said.

“That there’s conflicting information about what your district is,” Carella said, “it definitely doesn’t instill confidence in the system.”

In the 7th District race, both Kelly and Green have spoken against the redistricting plan that carved up Nashville.

“Whether this is blatant incompetence or purposeful deceit, the end result is the same: textbook voter disenfranchisement,” Kelly said in a statement Tuesday. “But make no mistake: this is just fuel for my fire and a glaring reminder of why I’m running in the first place – so that every Tennessean who has ever faced systemic oppression or bigotry knows that we will persist and fight for what’s right no matter what obstacles are levied against us.”

During redistricting early this year, Tennessee Republican state lawmakers redrew the state’s 5th Congressional District with an eye toward gaining an additional GOP seat in Congress, where the balance of power is on the line in the midterm elections.

The redistricting plan, which carved Nashville into three different seats, spurred the city’s longtime Democratic representative, Jim Cooper, not to seek reelection. That created an open race in a newly drawn district – now snaking through six counties – that favored Donald Trump over Joe Biden by 12 percentage points in 2020.

The 6th District is the most favorable Nashville seat for Republicans, where GOP U.S. Rep. John Rose of Cookeville is running for another term. Trump topped Biden there by 30 points. Rose faces Democrat Randal Cooper.

Kelly and Green are contending in the 7th District, which extends through 14 counties. Its voters favored Trump over Biden by 15 percentage points.

“Nashville has enough population to comprise nearly an entire single congressional district, as it has for decades,” said Mark Gaber, senior director of redistricting at the Campaign Legal Center. “But the legislature carved Nashville into three congressional districts with little regard for the needs of the city or its residents, and now voters are paying a double price.”

Meanwhile, Carella still put up a campaign sign in her yard for her candidate, Kelly, after she couldn’t vote in her race. While she’s disappointed she couldn’t vote for her preferred candidate this year, she’s grateful that her neighbors will be able to cast a correct ballot by Election Day.

“Still worth it,” she said.