South Korea says it has ability to intercept North’s missiles 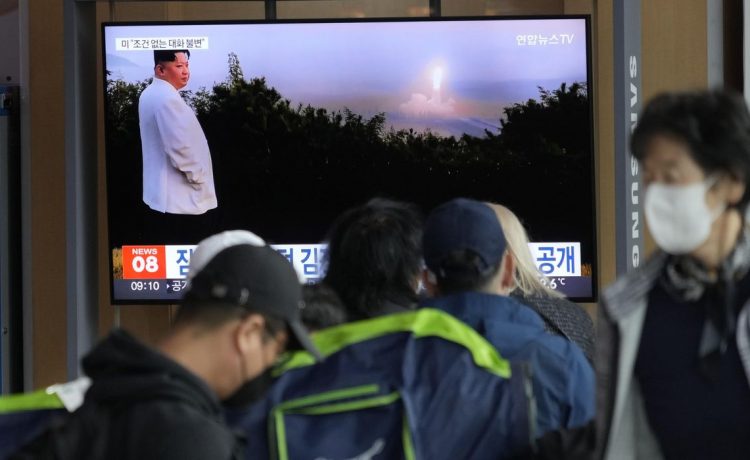 The North Korean launches, part of its record-breaking run of weapons tests this year, were seen as an attempt by leader Kim Jong Un to acquire a more intimidating arsenal to pressure its rivals to accept the North as a legitimate nuclear state and lift economic sanctions on the North.

Moon Hong Sik, acting spokesperson at the South Korean Defense Ministry, described North Korean nuclear threats as “very grave and serious.” But he told reporters that the South Korean missile defense system is capable of detecting and intercepting the weapons systems that North Korea said it mobilized in its drills.

Despite Moon’s comments, some observers have said a portion of the North’s newly developed weapons — such as a highly maneuverable KN-23 missile modeled on Russia’s Iskander missile and a developmental hypersonic missile — may overcome South Korean and U.S. missile defenses. They also say if North Korea launches multiple missiles from different sites simultaneously, it would be more difficult for the allies to spot liftoffs in advance and shoot them down.

South Korean President Yoon Suk Yeol reiterated his vow to strengthen South Korea’s defense in conjunction with its alliance with the United States and their trilateral security cooperation with Japan. He said the recent weapons demonstrations showed that the North’s nuclear threat is “getting serious every day.”

“North Korea has been consistently developing and advancing nuclear weapons capabilities and is now threatening not only (South Korea) but the entire world, but I think there is nothing North Korea could gain through nukes,” Yoon told reporters at his office in Seoul.

He tried to reassure the public, calling for South Koreans to “not worry too much and do your best with economic activities and livelihoods.”

Outside concerns about North Korea’s nuclear program have grown since the North last month adopted a law authorizing the preemptive use of nuclear weapons in certain situations. South Korea’s military has since warned North Korea that it would self-destruct if it uses its bombs.

In August, Kim Yo-jong, the powerful sister of Kim Jong-un, ridiculed what she called the U.S. and South Korean militaries’ misidentification of the exact site for the North’s two previous missile tests.

“If the data and flight trajectory (of the missiles) are known, (South Korea) will be so bewildered and afraid,” she said.

According to North Korean announcement on its seven rounds of launches, the weapons mobilized in the drills include a new type of intermediate-range ballistic missile that traveled about 4,500 kilometers (2,800 miles), a distance sufficient to reach the U.S. Pacific territory of Guam and beyond. Some experts say the new missile may aim to target a faraway site like Alaska or Hawaii.

Another missile that North Korea said was launched from a silo under an inland reservoir was likely a new version of its KN-23 missile, whose highly maneuverable and lower-trajectory flight provides it with greater chances of evading missile defense systems.

North Korea’s first missile firing under a reservoir was believed to be aimed at diversifying its launch sites to curtail enemy missile defenses. In recent years, North Korea has also been pushing to build bigger submarines to acquire a nuclear retaliatory attack capability.

Before the North’s announcement, South Korean, Japanese and U.S. authorities reported all seven rounds of missile launches. But none of their public reports included a reservoir-launched missile, an apparent failure to detect whether the weapon was launched from underwater.

Kim Jun-rak, a spokesperson at South Korea’s Joint Chiefs of Staff, told reporters that a missile launch from a reservoir was seen as a desperate attempt by North Korea to escape South Korean and U.S. surveillance. He said a ballistic missile launched from a submarine is an effective weapons system but didn’t say whether the reservoir-fired missile would pose a new security threat to South Korea.

In the face of the increasing North Korean nuclear threat, South Korea has been strengthening its missile defenses while also developing preemptive attack plans.

The United States, which deploys about 28,500 troops in South Korea, has been operating an advanced anti-missile system called Terminal High Altitude Area Defense in southern South Korea since 2017, apparently aimed at protecting nearby regions and additional U.S. forces that may arrive through southern South Korean ports in the event of war. The U.S. and South Korean militaries also operate Patriot batteries to defend key military facilities and the Seoul capital region, and South Korea is also developing indigenous systems designed to intercept various kinds of North Korean missiles.