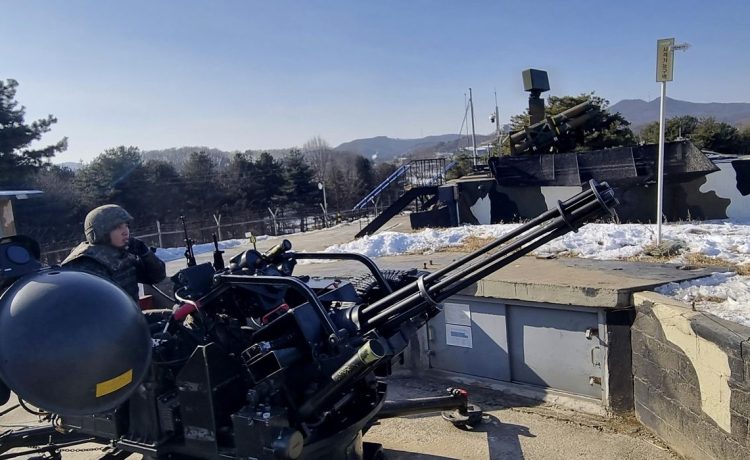 SEOUL, South Korea — South Korea staged large-scale military drills Thursday to simulate shooting down drones as a step to bolster its readiness against North Korean provocations, three days after the North flew drones into its territory for the first time in five years.

South Korean warplanes and helicopters failed to bring down any of the five North Korean drones spotted south of the border on Monday, before they flew back home or vanished from South Korean radars. One of them traveled as far as northern Seoul. That caused security jitters among many people in the South, for which the military offered a rare public apology Tuesday.

Thursday’s training involved land-based anti-air guns, drones playing the role of enemy drones, and a total of 20 fighter jets, attack helicopters and unmanned assets. While there was no actual live-fire, it was still the country’s first major anti-drone drills since 2017, according to military authorities.

The drills near Seoul set up diverse scenarios of border infiltrations by small enemy drones, under which the mobilized South Korean military assets practiced how they could detect, track and shoot them down, the Joint Chiefs of Staff said in a statement.

On Thursday, South Korean President Yoon Suk Yeol reiterated his push to build a stronger air defense and get tough on North Korean provocations. The North’s drone flights followed its record number of missile tests this year that some experts say is part of an effort to pressure the United States and its allies to make some concessions like sanctions relief.

“Whether they have nukes or whatever weapons of mass destruction they have, we must send a clear message to those who repeat provocations. We must not be frightened of (their nukes) and we must not hesitate,” Yoon said during a visit to a weapons development agency. “To obtain peace, we must prepare for a war that (we can win) overwhelmingly.”

North Korea’s state media hasn’t commented on South Korea’s announcement of its reported drone flights. But some observers say North Korea likely sent those drones to test South Korean and U.S. readiness. They say North Korea also likely assessed that drones could be a cheap yet effective method to trigger security concerns and an internal divide in South Korea.

In response the North’s drone flying, South Korea said it also sent three of its surveillance drones across the border in a rare tit-for-tat measure. North Korea didn’t make any reaction, according to South Korean defense officials.