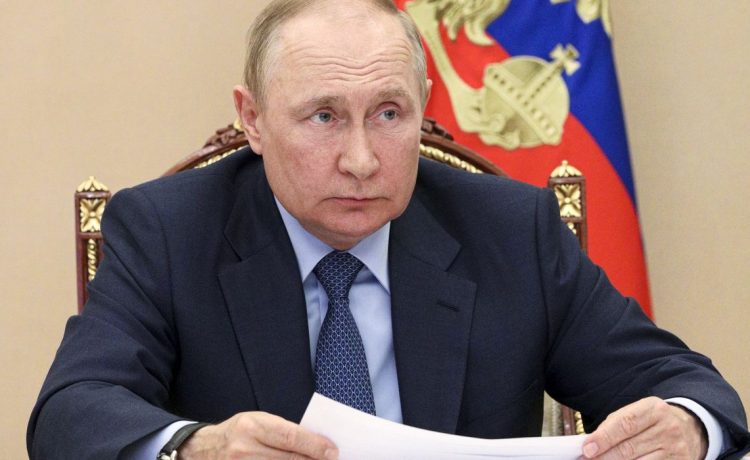 Moscow is attempting to unleash its leverage from space to global energy markets in a revamped effort to break Western solidarity and punish the United States and Europe for militarily supporting Ukraine during the more than five months since Russian forces invaded Ukraine.

The latest salvo saw Russian officials declare on Tuesday that their country will pull out of the International Space Station (ISS) in 2024, ending decades of cooperation with the United States and its allies in space and putting the future of the facility in doubt.

The announcement came a day after Russian energy giant Gazprom said it will slash gas flows to Europe through the key Nord Stream 1 pipeline down to just 20% capacity — a move that sparked an immediate jump in European energy prices and added fresh urgency to Europe’s effort to reduce consumption and stockpile fuel.

In response to the Gazprom move, the European Union on Tuesday approved an emergency plan calling on countries to cut their gas usage by as much as 15% in the coming months. Europe has already reduced its dependence on Russian energy dramatically since the war in Ukraine began, but Russian fuel still accounts for about 15% of the continent’s gas consumption.

European officials say they are now bracing for what could be a painful winter.

“I know that the decision was not easy, but I think, at the end, everybody understands that this sacrifice is necessary,” Czech Industry Minister Jozef Sikela said Tuesday after the EU’s emergency meeting in Brussels. “We have to, and we will, share the pain.”

‘Running out of measures’

As Europe stockpiles gas, Russian warplanes on Tuesday struck targets in Ukraine’s Black Sea region near the strategically vital port city of Odesa. The strikes sparked fears that a breakthrough agreement that Moscow and Kyiv struck over the weekend to allow grain shipments to resume from Ukraine’s Black Sea ports may now be in jeopardy.

Speculation swirled Tuesday that the Kremlin remains willing to hold global food supplies hostage as a part of its broader battle plan in Ukraine, and that any agreements struck with Russian President Vladimir Putin’s government cannot be trusted.

But the Kremlin has seemed to revel in using its leverage across a host of arenas this week, bragging that there is increasingly little the U.S. and Europe can do about it. Just as Russia announced it would abandon the ISS, top Kremlin officials claimed Tuesday that the West is rapidly running out of ways to hold Russia accountable for the bloody conflict in Ukraine.

“We can see that EU countries and North American nations are literally competing with each other to take unfriendly measures against Russia,” Kremlin spokesman Dmitry Peskov told reporters, according to Russia’s state-run Tass News Agency.

“However, we can also see that they are running out of measures that they expect to put pressure on us and make us change our position,” Mr. Peskov said.

The U.S. and its NATO allies have relied on unprecedented financial sanctions to punish Russia for invading Ukraine. The sanctions have undoubtedly taken a toll on the Russian economy, but they seem to have had relatively little impact on Mr. Putin’s broader strategy.

But Russia’s actual goal in Ukraine remains a subject of debate.

Russian Foreign Minister Sergey Lavrov said on Sunday that the goal is to topple President Volodymyr Zelenskyy’s government, expressing the Kremlin’s war aims in some of the bluntest terms yet as its forces continue to pummel parts of Ukraine with artillery barrages and airstrikes.

Mr. Lavrov’s remarks contrasted with the Kremlin’s line early in the war, when it repeatedly emphasized that Russia wasn’t seeking to overthrow the Zelenskyy government, even as Moscow’s troops closed in on Kyiv. Russia later retreated from around the capital and turned its attention to capturing Ukraine’s industrial Donbas region in the east.

Russian troops have made slow but steady gains in the region over the past several months and now control virtually all of Luhansk, one of two provinces making up the Donbas. The other, Donetsk, is facing a major Russian ground and artillery assault.

In Washington on Tuesday, President Biden faced renewed criticism for his administration’s handling of the conflict.

While the U.S. has sent billions of dollars in military aid to Ukrainian troops, Republican critics say the White House could have taken stronger measures sooner to prevent a Russian blockade of Ukraine’s Black Sea ports. Such a strategy, they say, could have helped to stave off global food shortages that have resulted from interruptions of wheat and grain shipments.

“The Biden administration says its decision-making throughout the process has been deliberate and nuanced. History will likely judge otherwise,” Senate Minority Leader Mitch McConnell said on the chamber floor Tuesday, arguing the U.S. should have acted much faster to give Ukraine long-range rockets, anti-ship missiles, and other weapons capable of inflicting substantial damage on Russian forces.

The “months before Putin’s escalation clearly called for boldness and resolve, to say nothing of the months since,” said Mr. McConnell, Kentucky Republican. “But too often the administration’s first instincts have been to plod along slowly and vacillate. The Ukrainians have fought bravely to stop Russia’s advance despite being undermanned and outgunned. Think what they could have accomplished” with more U.S. help early in the war.

Russia’s decision to quit the ISS will surely have significant ramifications for global cooperation in space, which has been a hallmark of the post-Cold War international landscape.

The ISS, jointly run by Russia, the U.S., Europe, Canada and Japan, has been continuously inhabited for 22 years. The $100 billion complex serves as a key research facility where crews test cutting-edge technology that could ultimately be used in future manned missions to the moon or even Mars.

NASA did not immediately comment on the impacts of the Russian announcement.

But Moscow made clear it intends to launch its own space project, perhaps igniting a 21st-century version of the U.S.-Russia space race that helped define the Cold War.

Yuri Borisov, the newly installed head of Russia’s Roscosmos space agency, said his country aims to launch its own facility by 2024. “I think that by that time we will start forming a Russian orbiting station,” he said during a meeting with Mr. Putin on Tuesday.

It’s unclear what, if anything, the U.S. and its European allies may offer Russia to continue ISS cooperation. So far the U.S. and NATO have insisted they’ll maintain economic sanctions on Moscow until all Russian troops withdraw from Ukraine.

Russia argues the sanctions are the primary driver behind its decision to cut gas flows to Europe. Russian officials said this week that the Nord Stream 1 pipeline is in need of repairs, but Western sanctions have made it exceedingly difficult to get the supplies and parts needed.

European officials reject those explanations and say that Mr. Putin is determined to use energy as a weapon.

Mr. Putin “is trying to weaken the great support for Ukraine and drive a wedge into our society,” German Economy Minister Robert Habeck told Deutsche Presse-Agentur. “To do this, he stirs up uncertainty and drives up prices.”