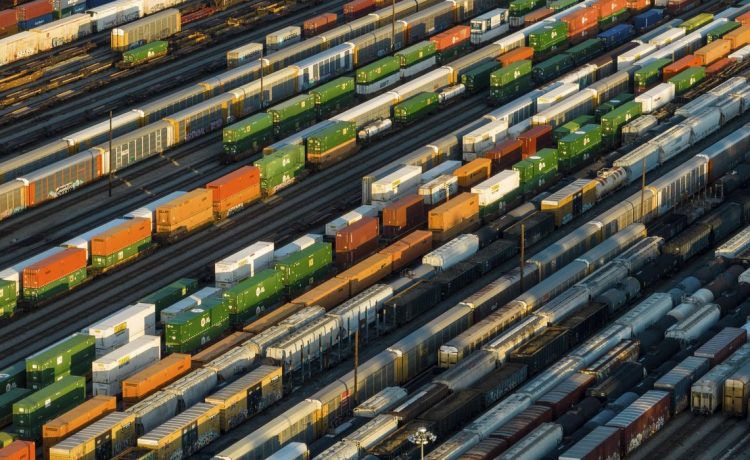 President Biden and congressional Democrats moved Tuesday with Republicans to impose a freight rail agreement on balky unions to prevent a crippling strike, exposing a rift between the president and his labor base heading into the 2024 election cycle.

The push by Mr. Biden and Democratic leaders for a House vote Wednesday to enforce the tentative contract under a century-old labor law infuriated unions and their most liberal allies. They said Mr. Biden, who bills himself as the most pro-union president in history, was betraying his supporters and ignoring workers’ efforts to negotiate paid sick leave.

Liberal critics of the president’s decision also noted that as a senator in 1992, Mr. Biden voted against a railroad contract imposed by Congress and the Republican administration of President George H.W. Bush. He said back then that the vote was “rewarding” railroad companies and was assuring carriers that “the odds were stacked in their favor.”

The nation’s third-largest railroad workers union, the Brotherhood of Maintenance of Way Employees Division of the International Brotherhood of Teamsters (BMWED), said it was “deeply disappointed” in Mr. Biden’s call for Congress to pass a bill to block a freight rail strike next week.

The president, facing a massive rail disruption that could cost the U.S. economy about $2 billion per day just before the holidays, met with the top four congressional leaders at the White House on Tuesday and secured their commitment to vote on legislation to avert a walkout.

SEE ALSO: Train union down on Biden for pushing Congress to avert strike

Emerging from the West Wing meeting, House Speaker Nancy Pelosi said the House will vote on Wednesday to impose the agreement on the 12 unions and railroad carriers.

“I don’t like going against the ability of the unions to strike, but weighing the equities we must avoid a strike,” the California Democrat said.

Senate Majority Leader Chuck Schumer, a New York Democrat who has resisted the move, said he and Senate Minority Leader Mitch McConnell, Kentucky Republican, agreed Tuesday “to try to get it done ASAP.”

Four unions have rejected the contract, and a walkout by any of them would be honored by all of them, idling more than 100,000 workers. The U.S. Chamber of Commerce and numerous other business groups have urged the administration and Congress to intervene, saying a rail strike would cause economic chaos.

The unions and their supporters in Congress bitterly criticized any move that would result in workers failing to gain paid sick leave as part of the agreement.

“If your question is: Will I demand a vote to make sure that workers in the rail industry have what tens of millions of Americans have … guaranteed paid sick leave? The answer is yes,” Mr. Sanders told CNN.

“Just because Congress has the authority to impose a heavy-handed solution does not mean we should. It is wrong for the Biden administration, which has failed to fight for workers, to ask Congress to impose a deal the workers themselves have rejected,” Mr. Rubio said.

“Instead of relying on Congress to carry their water, the parties should go back to the negotiating table and strike a fair deal that workers can accept,” he said.

The tentative agreement would give union members an immediate 14% raise. with back pay dating to 2020. It also would provide raises totaling 24% during the five-year contract through 2024, and cash bonuses of $1,000 per year.

But paid sick leave has been a major sticking point.

The recommendations of a presidential emergency board, which formed the basis of the tentative agreement struck in September, did not specify sick leave benefits but advised that the issue be addressed in the grievance and arbitration process.

Under the terms of the agreement brokered by the Biden administration, railroad workers could take unpaid days off for doctor appointments without penalty under railroad attendance rules.

Matt Weaver, a BMWED member who voted against the contract, said rail workers were considered “essential employees” through the pandemic.

“And we don’t have a single paid sick day to use when we’re off,” Mr. Weaver said in a video posted by the liberal advocacy group MorePerfectUnion.us. “We’ve worked through the pandemic, we were considered essential. And now it seems like we’re expendable.”

Mr. Biden made clear in a statement Monday that he doesn’t support Congress trying to add sick-leave provisions in the legislation.

“However well-intentioned, any changes would risk delay and a debilitating shutdown,” Mr. Biden said. “The agreement was reached in good faith by both sides. I share workers’ concern about the inability to take leave to recover from illness or care for a sick family member. No one should have to choose between their job and their health — or the health of their children. I have pressed legislation and proposals to advance the cause of paid leave in my two years in office, and will continue to do so.”

But, the president said, “at this critical moment for our economy, in the holiday season, we cannot let our strongly held conviction for better outcomes for workers deny workers the benefits of the bargain they reached, and hurl this nation into a devastating rail freight shutdown.”

The position, deeply unpopular with labor, is opening a rift between the White House and unions whose support was crucial to Mr. Biden’s election in 2020.

BMWED urged Mr. Biden “and any member of Congress that truly supports the working class to ensure that any regulations provide paid sick leave for all railroad workers.”

“It is not enough to ‘share workers’ concerns,’” the union said.

“We’re trying to address an issue here of sick time … this action prevents us from reaching the end of our process,” he said on CNN.

“If Biden were as pro-union as he claims to be, he could have called on Congress to improve the contract for workers and force railway management to accept it. He did not do that,” said Morris Pearl, the group’s chairman.

“If Congress votes to force rail workers to accept the current deal, they will be doing a massive disservice to workers who deserve fair compensation and adequate sick leave. By choosing to ram through this terrible deal, Joe Biden and Democratic leadership in Congress are betraying the rail unions and taking the side of billionaires like Warren Buffet, whose company Berkshire Hathaway owns BNSF, one of the largest railways in America,” Mr. Pearl said.

Jonah Furman, a labor activist who worked for Mr. Sanders’ 2020 presidential campaign, called Mr. Biden’s move a “full sellout from the White House for the majority of rail workers who rejected the deal the President brokered, preemptively denying them the right to strike.”

“This was the ‘which side are you on?’ moment, and the White House chose the railroad bosses,” Mr. Furman tweeted.

Congress is authorized under the 1926 Railway Labor Act to intervene in railroad strikes.

In 1992, the last time Congress intervened, Mr. Biden was one of only six senators to vote against congressional action that resolved the railroad labor dispute.

She said only that she was not “going to legislate” on the subject.