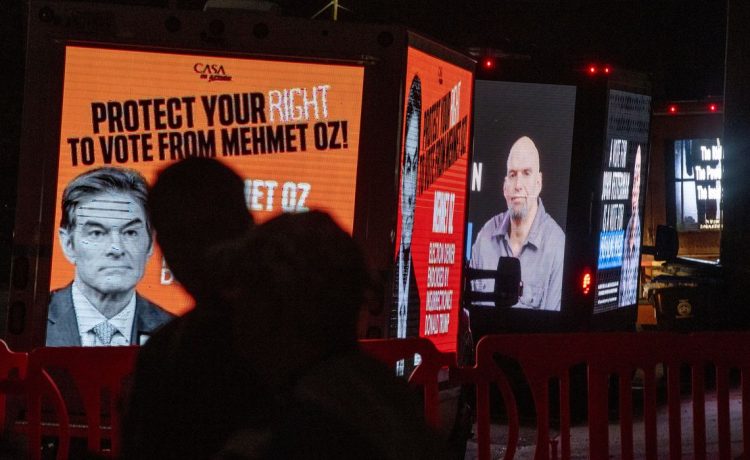 You haven’t heard much about them in all the midterm election coverage, but third-party and independent candidates in several states have picked up enough support to influence the outcomes of some of the nation’s closest Senate races.

In Georgia’s Senate race, Libertarian candidate Chase Oliver pulled in 4.6% of the vote in a Trafalgar/Daily Wire poll released this week. Mr. Oliver’s pool of support is significant enough to force the two leading candidates, Republican Herschel Walker and Democratic incumbent Sen. Raphael Warnock, into a December runoff if neither candidate can win more than 50% of the vote on Nov. 8.

In the vast majority of polls that include Mr. Oliver, neither Warnock nor Walker has earned enough support to avert a runoff and the race is so close it is considered a toss-up.

“Neither candidate is likely to hit 50% under that scenario,” Erin Covey, an analyst for the non-partisan Inside Elections, said.

Nevada’s midterm ballot provides voters with several choices that could sway which of the two leading candidates wins the Senate seat.

In addition to incumbent Democrat Sen. Catherine Cortez Masto and Republican challenger Adam Laxalt, Libertarian Neil Scott and independent candidate Barry Lindermann are on the ballot. And Silver State voters have an extra choice: “None of these candidates,” a non-binding option that could draw away thousands of dissatisfied voters from the frontrunners. All of these options could tip the outcome of the race, which is now considered a toss-up between Ms. Cortez Masto and Mr. Laxalt.

In Pennsylvania, where Democrat John Fetterman leads by about a point over Republican Mehmet Oz, three other candidates on the ballot are drawing a fraction of support that could influence the outcome, Suffolk University polling director David Paleologos told The Washington Times.

While early voting is already underway in the Keystone State, Mr. Fetterman’s disastrous debate performance this week may send voters who don’t like Mr. Oz looking for another alternative to Mr. Fetterman out of concern for his lingering health problems following a near-fatal stroke in May.

“I don’t care if that candidate gets half of a percent of the vote,” Mr. Paleologos said. “That might be the half that Fetterman wins or loses by.”

Mr. Paleologos believes the third-party choice is drawing votes away from Mr. Masters.

“Let’s say voters are upset at Biden in Arizona, and they’re upset about the economy and they’re not voting for Kelly,” he said. “But they may disagree with Masters on [abortion] and whatever stance he takes on that. Now they have an outlet. That’s a vote that would go to Masters, probably.”

It wouldn’t be the first time a third-party candidate swayed the outcome of an election.

In Georgia’s tight Senate race, Mr. Oliver, the Libertarian candidate, said his candidacy should not be blamed for forcing Mr. Walker and Mr. Warnock into a runoff.

“I feel like the two parties are getting more and more hyper-partisan and further away from where the average voter is,” Mr. Oliver told The Times. “And I think we need to have someone on the ballot who is working for the voter and not just for their preferred political party.”

Mr. Oliver was not on the stage in Savannah when Mr. Walker faced off with Mr. Warnock in their only debate, but he participated in a televised debate with Mr. Warnock a few days later, boosting his name recognition with voters.

If neither Mr. Warnock nor Mr. Walker wins more than 50%, triggering a runoff, it’s their own fault, Mr. Oliver said.

“That’s a signal that they need to be far more responsive to the voters, or that we need more choices in the discourse,” Mr. Oliver said.

Many senate races also include write-in candidates who do not appear on the ballot but in some cases are picking up significant support.

On Tuesday, hours before Mr. Fetterman and Mr. Oz walked onto the debate stage, write-in Pennsylvania Senate candidate Everett Stern, an independent, announced he was dropping out and backing Mr. Fetterman.

“I am polling around 3% which places Democracy at risk,” Mr. Stern announced on Twitter. “In the interest of protecting the United States, I am dropping out of the U.S. Senate Race in PA. I fully endorse John Fetterman. The Democrats must win. PA must be Blue. It has been an honor running.”