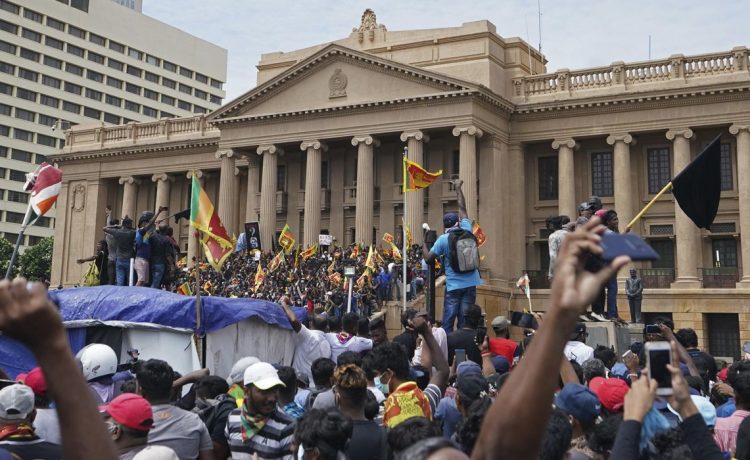 Thousands of Sri Lankan protesters took over the presidential palace Saturday, storming through police barricades amid the prime minister’s resignation.

Demonstrators, angered over the country’s economic crisis, swam in President Gotabaya Rajapaksa’s pool, hung banners from his balcony, and threw a party as he fled shortly before the takeover.

“We are in Gotabaya’s room. This is the underwear he left behind,” one protester shared on social media, while holding up a pair of black briefs. “He has left his shoes behind too.”

The demonstrations come amid months of turmoil, including rising inflation and food and fuel shortages.

Sri Lankan Prime Minister Ranil Wickremesinghe agreed to resign on Saturday, after party leaders in Parliament urged him to step down amid the chaotic protests.

Mr. Wickremesinghe said he promised to resign once all parties agree on a new government.

“Today in this country, we have a fuel crisis, a food shortage, we have the head of the World Food Program coming here and we have several matters to discuss with the IMF,” Mr. Wickremesinghe said. “Therefore, if this government leaves there should be another government.”

The residential break-in by tens of thousands of Sri Lankan residents is perhaps the country’s most dramatic protest in modern history. At least 55 people were injured in the demonstrations.