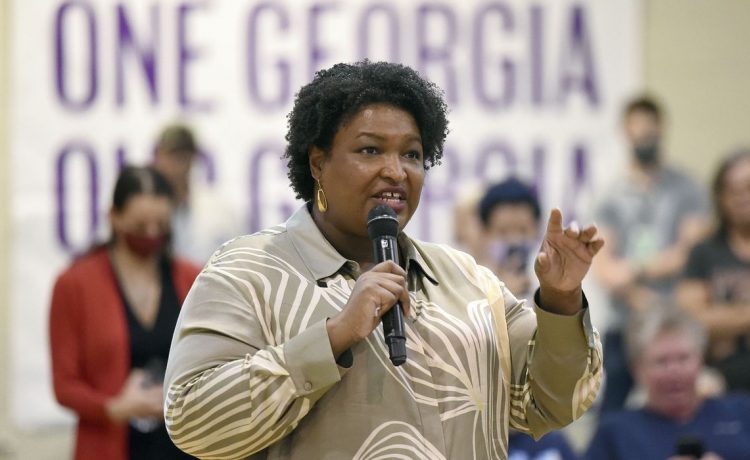 Democrat Stacey Abrams doubled down on her comment linking abortion to inflation, an ill-timed remark that handed Republicans the advantage on her go-to issue as she struggles to play catch-up in the Georgia gubernatorial contest.

Ms. Abrams swung back with a Twitter thread after being slammed for an interview on MSNBC’s Morning Joe in which she connected concerns about high prices to abortion access, arguing that “having children is why you’re worried about your price for gas.”

Conservatives accused her of ghoulishly promoting more abortions as a remedy for economic woes. Ms. Abrams responded by ticking off concerns about Georgia’s eviction rate and healthcare costs, emphasizing that women “forced to carry unwanted pregnancies to term are 60% less likely to work full-time.”

“So, yes, GOP, it matters if a woman controls how or if she has a family. It matters for gas prices, groceries, housing, the jobs you can get & the life you can plan,” she tweeted in the Wednesday thread. “We know you know it’s true. That’s why lies are your only strategy. For the rest of [us], we’ll keep voting.”

Her decision to brazen it out came with polls showing her running consistently behind Republican Gov. Brian Kemp, who holds a 50.6% to 44.9% advantage in the FiveThirtyEight polling tracker with the election less than three weeks away.

Mr. Kemp picked up on her remark by tweeting “my opponent wants abortion without limits to fix Joe Biden’s 40-year high inflation.” He touted his inflation-fighting strategy which includes cutting taxes, suspending the gas tax and passing a property tax rebate.

Sen. Ted Cruz, Texas Republican, didn’t mince words. “Despicable,” he tweeted. “I can’t believe this needs to be said, but ending a human life is not the solution for inflation.”

I can’t believe this needs to be said, but ending a human life is not the solution for inflation. https://t.co/Ign36R3GzU

Meanwhile, the headlines in the right-tilting media were brutal. “Stacey Abrams Has a Fix for Inflation, and Of Course It’s Abortion,” said PJ Media.

Not even the White House would come to Ms. Abrams’ rescue. Asked about the statement by Fox News correspondent Peter Doocy, White House press secretary Karine Jean-Pierre said she hadn’t seen the candidate’s remarks, concluding, “I’m not going to comment on that.”

In the MSNBC interview, contributor Mike Barnicle told her that while abortion is an issue “it nowhere reaches the level of interest of voters in terms of the cost of gas, food, bread, milk.” He asked how she would alleviate high prices.

“Let’s be clear: Having children is why you’re worried about your price for gas,” said Ms. Abrams. “It’s why you’re concerned about how much food costs. For women, this is not a reductive issue. You can’t divorce being forced to carry an unwanted pregnancy from the economic realities of having a child. And so it’s important for us to have both … conversations. We don’t have the luxury of reducing it or separating them out.”

A Newsweek fact-check sided with Ms. Abrams on the question: “Did Stacey Abrams Suggest Abortions Can Ease Inflation?”

“While it’s true that Abrams said having a child is directly related to worries about the economy, she didn’t say that abortion could solve inflation as Republicans suggested or implied in captions to the video,” it said.