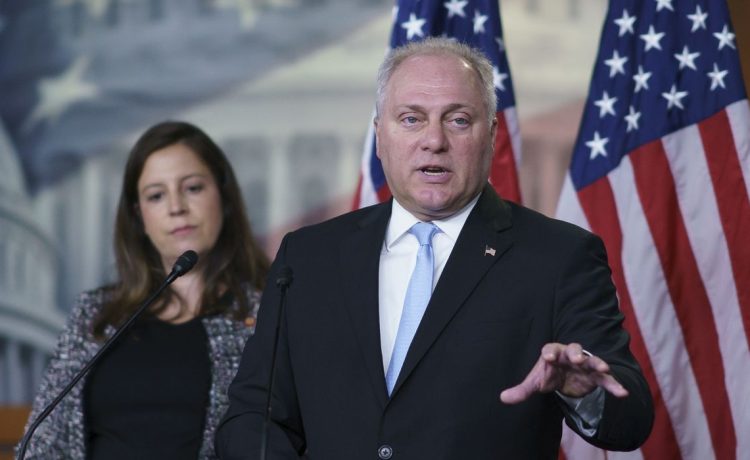 House Majority Leader-elect Steve Scalise is surveying his future territory and making a promise. The Louisiana Republican has sent his GOP colleagues a letter outlining the legislation he will bring before his peers in the first two weeks of the year.

He is ready to roll.

“I have been meeting with our incoming committee chairs over the last month to start making plans for legislation on the House Floor so that we can hit the ground running in our first weeks in the majority,” Mr. Scalise advised his peers.

“We have made it clear that we must change the way we do business in order to improve the legislative process. We understand that developing a good process will lead to better legislative outcomes. Returning to work in person, empowering each committee, moving legislation through regular order, encouraging Member input, and allowing adequate time to read legislation will be major priorities of our incoming majority. We are excited to make those principles a reality in the House,” the lawmaker said in his letter.

“I’m excited to see us begin making our ambitious agenda a reality and begin delivering for the American people after we elect Kevin McCarthy Speaker of the House,” Mr. Scalise predicted.

The challenge on the southern U.S. border continues. Undocumented migrants continue to arrive — and arrive and arrive. Blame it all on the White House, some say.

“The Biden administration doesn’t appear to have a plan on dealing with record numbers of aliens entering the United States illegally, aside from funneling increasing numbers of migrants into the country indefinitely. The logical explanation is that few Americans know the facts about the border, and much of President’s Biden‘s Democratic base doesn’t care about the illegal migration crisis, so he doesn’t care either,” advises a new report from the Center for Immigration Studies, written by Andrew Arthur, the center’s fellow for law and policy.

“While Biden has proven himself adept at ending successful border policies, he has shown little skill at crafting policies to control illegal immigration. Title 42 will eventually end — with a predicted 14,000 migrants per day or more than five million per year entering the country illegally over the Southwest border — and there is no master plan ready to go to secure the border,” Mr. Arthur said.

“Most Americans have no idea what’s occurring at the border, and are receiving their ‘news’ from outlets whose reporters either don’t know the facts themselves or don’t care. Many outlets are heavy on human-interest stories, but light on facts,” he wrote.

Monitoring liberal bias in the news media is a never-ending task.

The always nimble Newsbusters.org — a conservative press watchdog — is up to that task, and now has compiled a list of the most “biased outbursts” from journalists during 2022.

The “awards” are very specific. So are the titles. They include The GOP Will End Democracy Award; The Damn Those Conservatives Award; The Praising and Protecting Old Joe Award; The Media Heroes Award; The Cursing the Conservative Court Award; The Joy of Hate Award for Joy Reid Rants; The Craziest Analysis Award; and the Celebrity Freak-Outs Award.

CNN senior political analyst Ryan Lizza won the Praising and Protecting Old Joe Award for a comment on Aug. 8. The analyst offered a positive interpretation of President Biden’s lavish spending during the year. Here is Mr. Lizza’s quote of note:

“If you add up those seven pieces of legislation, it’s a $3.5 trillion agenda that Biden and the Democrats have passed since early last year. There’s really nothing like that in terms of that scale. You have to go back to — depending on how you define these things — to LBJ. So, I think for history, Biden — I don’t think there’s much debate any more. He is an enormously consequential president and just judging him by his legislative agenda, you know, he’s sort of in that modern pantheon now,” Mr. Lizza said.

“LBJ” is, of course, former President Lyndon B. Johnson.

Find more telling “awards” — and much more, of course — at Newsbusters.org.

One particular cable news network enjoyed a good year in 2022.

During the week of Dec. 19-25, Fox News Channel marked 97 consecutive weeks besting its cable news competition with 1.6 million primetime viewers, compared to MSNBC with 1.2 million and CNN with 552,000. In addition, Fox News programs made up 92 of the top 100 cable news shows that aired throughout 2022.

“The Five” continues to lead the way with an average of 3 million nightly viewers, followed by “Tucker Carlson Tonight” with 2.6 million.

They include sources for heirloom seeds, perennials, bulbs, fruits and veggies, organic fare and a catalogue devoted to “your garden’s problem areas.”

Find the offer at Almanac.com/content/garden-seed-catalogs-mail.