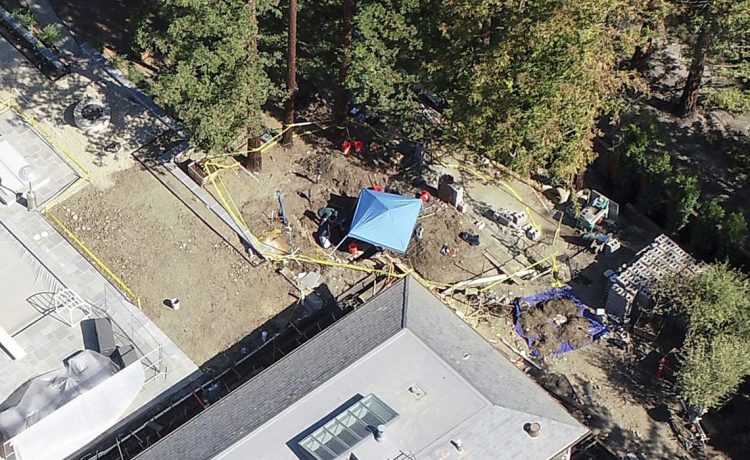 California police brought cadaver dogs to the backyard of a Silicon Valley mansion to help investigate a stolen Mercedes Benz that was unearthed by landscapers, but no remains have yet been found.

The convertible, reported stolen by the mansion’s original owner in 1992, was found 4 to 5 feet deep, with its top down, filled with unused bags of cement.

Once notified by the landscapers, police decided to do their own digging, going to the residence in Atherton, California, just before 9 a.m. local time on Thursday.

“The cadaver dogs made a slight notification of possible human remains. … Excavation is ongoing and at this time, no human remains have been located,” the Atherton Police Department said.

A second investigation of the scene by cadaver dogs on Friday uncovered another possible notification of human remains, but no remains have yet been found.

The mansion was sold in 2014 for $7.3 million. The current owners bought the property in 2020 for $15 million, the San Francisco Chronicle reported.

The current owners are not under investigation, Cmdr. Larsen said, according to The Associated Press.

The car, reported stolen from a nearby mall in 1992, is recorded as belonging to Johnny Bocktune Lew. Lew had the mansion built in 1990, according to the San Francisco Chronicle.

Neighbors told KNTV-TV, a Bay Area NBC affiliate, that Lew lived in the house until it was sold in 2014. Lew later died in 2015.

In 1966, Lew was found guilty of murdering a 21-year-old woman in Los Angeles County. He was released from prison after the California Supreme Court reversed the conviction in 1968, citing hearsay evidence that should not have been allowed at trial, The Chronicle reported, citing court records.

Records showed that in 1977 Lew was convicted of two counts of attempted murder, also in Los Angeles County, and spent three years in prison.

In the late 1990s, Lew was arrested for insurance fraud after he hired undercover police officers to take a $1.2 million yacht “out west of the Golden Gate Bridge into international waters and put it on the bottom,” the San Francisco Chronicle reported.

Cmdr. Larsen wouldn’t say if police believe the vehicle was registered to Lew.

“We have heard that name come up, but we have not confirmed through our sources that he in fact owned that vehicle,” Cmdr. Larsen said.

No criminal charges have been filed in relation to the investigation.

The sprawling home and property are valued at least $15 million, according to online real estate listings.

Atherton is one of the wealthiest towns in the U.S., with about 7,000 residents within its nearly 5 square miles (13 square kilometers).