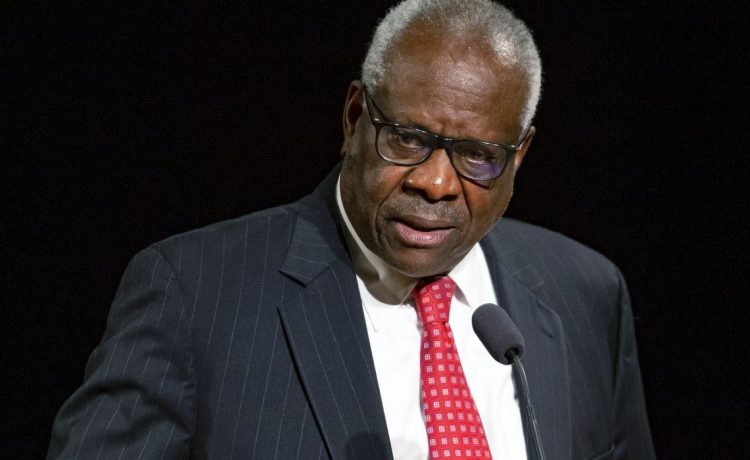 Student activists who circulated an online petition calling for Justice Clarence Thomas to be fired are taking credit for his recent decision not to teach at the university.

“Guys. We did it. Clarence Thomas will no longer be teaching at George Washington University Law School. Despite the outward facade that Thomas was simply ‘unavailable’ to teach the class this Fall semester, the truth is that we are the reason he is not teaching at our school anymore,” wrote Jon Kay, who launched the online effort.

News broke Wednesday that Justice Thomas would not teach a law seminar at George Washington University following an uproar from students who object to the conservative justice’s rulings.

“Unfortunately, I am writing with some sad news: Justice Thomas has informed me that he is unavailable to co-teach the seminar this fall,” Mr. Maggs wrote. “I know that this is disappointing.”

A university official confirmed the announcement to The Washington Times.

He had taught the class with Mr. Maggs for roughly a decade, according to reports.

It’s unclear why Justice Thomas decided not to continue teaching, though he has been targeted by left-wing activists protesting outside his home in the aftermath of the high court decision reversing the national right to abortion.

Last month, the university had announced it wouldn’t fire Justice Thomas from teaching the course.

The school’s announcement came after students circulated the online petition, which gathered more than 6,000 signatures, calling for Justice Thomas to not be allowed to teach at the school. That followed the Supreme Court’s ruling in Dobbs v. Jackson Women’s Health Organization.

That decision, authored by Justice Samuel A. Alito, overturned the landmark 1973 Roe v. Wade decision, which gave women a national right to abortion.

Students pointed to Justice Thomas’ concurring opinion where he said other cases related to the doctrine of “substantive due process” should be reevaluated, such as those governing contraception, same-sex relations and marriage.

The students also took issue with his wife Virginia Thomas, a Trump ally, having attended the Jan. 6 rally and advocating for overturning the 2020 election results.

Democrats and liberal activists have been calling for Justice Thomas to either resign or recuse himself from hearing cases related to the election of the former president, suggesting he has a conflict of interest.

Jackson Hoppe, the director of public relations for the College Republicans chapter at George Washington University, said the announcement that Justice Thomas would no longer be teaching at the school was disappointing and troublesome.

“The university has lost a key figure who provides an invaluable contribution to the wide ideological spectrum that the university strives to promote. We recognize that the current reports indicate Justice Thomas made this decision based on his availability, but the uproar from the student body regarding his presence as faculty — and the incessant hostility shown towards conservative students and beliefs on campus in general — is great cause for alarm and must be addressed by the university,” he said.

“Judge Thomas is actively making life unsafe for thousands of students on our campus,” the petition read.

“With the recent Supreme Court decision that has stripped the right to bodily autonomy of people with wombs, and with his explicit intention to further strip the rights of queer people and remove the ability for people to practice safe sex without fear of pregnancy, it is evident that the employment of Clarence Thomas at George Washington University is completely unacceptable,” it read.