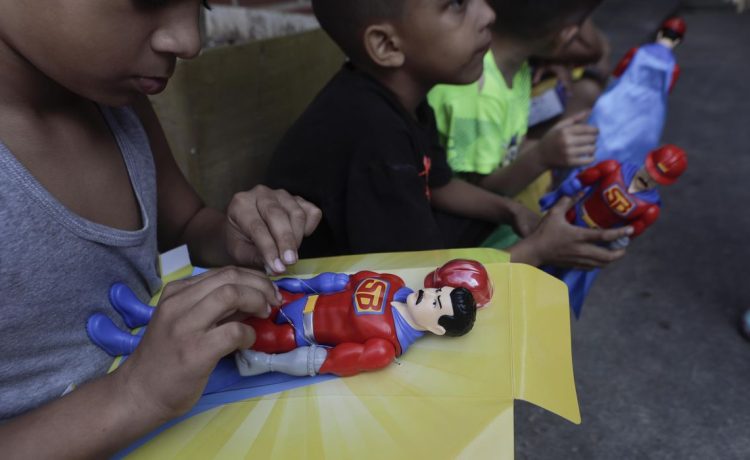 This holiday season, officials added a new item to their list: an action figure with red tights, a blue cape and a big mustache that fights the U.S. “empire” and is modeled after President Nicolas Maduro.

The character goes by the name of “Super Bigote” due to its thick black mustache. For about a year, it’s had an animated series on Venezuelan state television, where it fights a Donald Trump-like villain that tries to sow chaos from his base in a faraway mansion that resembles the White House.

In the days leading up to Christmas, officials in several parts of Venezuela shared videos of themselves handing out Super Bigote toys to children at holiday parties. Community organizations linked to the Maduro administration also said they gave out dozens of the politically charged action figures.

The Christmas giveaway has angered academics and opposition leaders, who described it as a tasteless effort to indoctrinate children as Venezuela struggles to recover from years of economic recession, food shortages and hyperinflation under Maduro’s rule – hardships that have forced millions of people to migrate.

But many government supporters were happy to receive the toy. In its animated series, Super Bigote also fights villains that resemble Venezuelan opposition leaders, who the government blames for U.S. sanctions that have also affected the nation’s economy.

“I loved this initiative” said Yasmin Herrera, a nurse who works for a government-funded community council in the town of Carayaca, about a 90-minute drive from Caracas. Herrera said she picked up 22 Super Bigote toys from a local government office last week, as well as two action figures of “Cilita,” a character that looks like Venezuela’s first lady Cilia Flores.

Members of Herrera’s community council wrapped up the toys and gave them to children in a public housing project, where there’s no running water and residents depend on water trucks.

“Some parents didn’t like the gifts, and the older kids weren’t very interested,” she recalled. “But the little kids are playing with them. We put a smile on their faces.”

Rosa Rodriguez, who helped Herrera wrap the toys, said that she was happy with the action figures because they helped young kids to “appreciate” Venezuela’s socialist revolution. She said that three years ago she received a free apartment from the government at the remote housing complex where the toys were handed out.

But others had less benign views on the new gifts. Belkis Bolivar, a leader at the nation’s largest teachers union, described the toys as a dangerous waste of money.

“These toys are loaded with ideology and they are trying to impose a cult of personality,” she said. “Kids who play with these toys may begin to idolize Maduro, like they idolize Superman or Spider-Man.”

She said that instead of spending money on “ideologically charged” toys, the government should fix up schools that have no electricity, and where the wages for new teachers are less than $20 a month.

Venezuela’s vice president Delcy Rodriguez said on Sunday that the government bought 13 million gifts for children around Venezuela, which has a population of just 25 million people. It was unclear how many of the gifts were action figures of Super Bigote or its partner, Cilita.

After the gifts were handed out, some Venezuelans also mocked the toy on social media by sharing pictures of Super Bigote and Cilita in embarrassing poses.