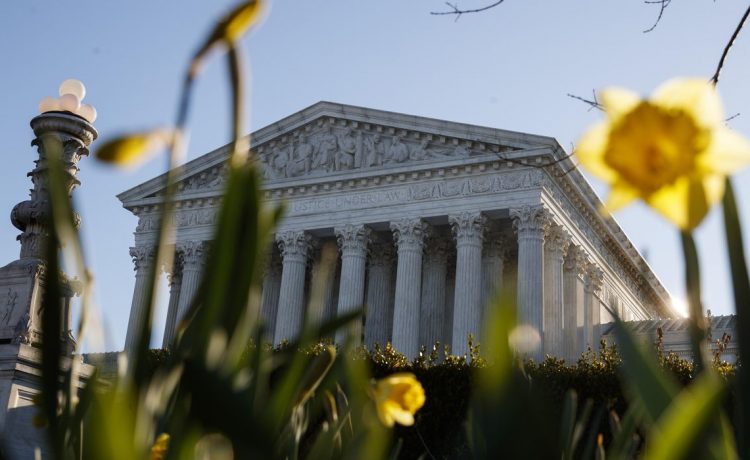 For 15 years, the Environmental Protection Agency has blocked Michael and Chantell Sackett from building a home on a vacant lot in a subdivision near Priest Lake, Idaho, declaring that the property is located on a wetland.

Now the Supreme Court is wading in.

The court began the 2022 term Monday by hearing oral arguments in Sackett v. EPA, a case closely watched for its potential to limit the agency’s authority to regulate development under the Clean Water Act in the vicinity of navigable waters, or the “waters of the United States.”

“Sackett v. EPA (2022) is set to be a groundbreaking case that could determine whether waters critical for drinking supply or flood retention continue to be federally protected against pollution and destruction,” said the National Wildlife Federation.

Sackett is the latest front in an ongoing national legal battle pitting ranchers, farmers and property owners — mostly in western states — against Washington regulators pushing to expand the definition of “navigable waters” to justify new federal restrictions on land use.

At issue in Sackett are two competing tests found in the court’s 4-1-4 split decision in the 2006 case Rapanos v. US: Whether protected wetlands are defined by their “continuous surface connection” to navigable waters, as Justice Antonin Scalia argued, or merely a “significant nexus,” as per Justice Anthony Kennedy.

At the hearing, the justices quizzed attorneys for the Pacific Legal Foundation and the Justice Department on points including the definition of wetlands; whether being located “adjacent” to a navigable waterway is the same as touching one, and whether having a barrier between a property and a lake makes a difference.

Pacific Legal Foundation attorney Damien Schiff argued the Sackett property is separated from Priest Lake by other houses, a road and a “roadside ditch,” but Justice Brett M. Kavanaugh said that every administration since 1977 has defined “adjacent wetland” to include those divided from navigable waters by berms, dunes, dykes or levees.

“Why shouldn’t we read ‘adjacent wetland’ in the statute to mean what EPA has said, as Justice [Ketanji Brown] Jackson asked, and what significance should it have that every administration since then has included those wetlands as covered by the statute?” Justice Kavanaugh asked.

On the other hand, Justice Neil Gorsuch grilled Justice Department attorney Brian Fletcher on how far is too far to be considered “adjacent.” The Sackett property is located about 300 feet from Priest Lake.

“I imagine that most of the water flow and rainfall and snowfall in quite a large geographic area drains into the lake eventually. Would that whole watershed be adjacent, too?” asked Justice Gorsuch. “How does anyone know, any reasonable person know, within several hundred square miles that drains into a body of water under the waters of the United States, whether or not their land is adjacent?”

Mr. Fletcher said the EPA “rules out things that are many miles away” but doesn’t draw “bright-line rules,” adding that “they do not think 300 feet is unreasonable for adjacency.”

Replied Mr. Fletcher: “I don’t think so. I see where this is headed,” drawing laughter.

This morning, the Supreme Court will hear oral arguments for Sackett v. EPA, a case that will have a major impact on rural communities across the United States in deciding how the federal government can define “waters of the United States” or #WOTUS under the Clean Water Act.

Afterward, Mr. Schiff said he was optimistic about the Sackett family’s chances.

“It appeared that all nine justices recognized that the status quo of ‘significant nexus’ was problematic and that a majority is leaning toward adopting a standard that is closer to what the Sacketts have proposed than what EPA has offered,” said Mr. Schiff in a statement.

Environmentalists were also encouraged. Earthjustice’s Sambhav Sankar said that “we saw even the court’s conservative justices wrestle with the reality that all waters are connected.”

“There will always be difficult line-drawing problems in environmental regulation, but time has shown that those lines should be drawn by scientists and politically accountable lawmakers — not unelected judges,” the environmental group’s senior vice president said.

West Virginia Attorney General Patrick Morrisey, who led a 26-state coalition in an amicus brief supporting the Sacketts, urged the court to “define once and for all the term ‘waters of the United States’ in such a way that state lands and waters are not subject to the whims of unelected bureaucrats.”

“This issue affects not only developers but just about anyone who finds themselves trying to build anywhere near a stream, river, or lake anywhere in the United States,” Mr. Morrisey said.

This is the second time the Sacketts have gone before the high court. In 2012, the court ruled in the couple’s favor by saying that they could challenge an EPA compliance order.

“A win would vindicate the Sacketts’ right to finally build their home and the rights of all landowners to make reasonable use of their property without abuse by overzealous federal regulators,” said the foundation.