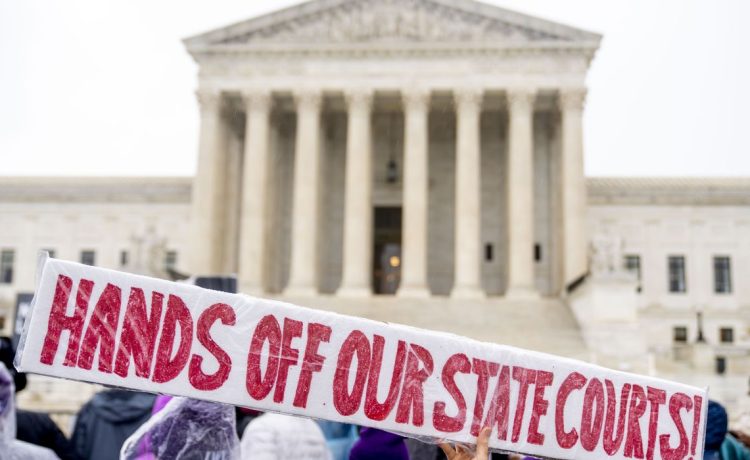 Supreme Court justices cast a skeptical eye Wednesday on claims that state legislatures rule in making decisions about federal elections, worrying that it would upend the usual checks and balances.

The case stemmed from a dispute between North Carolina’s Legislature and state courts over who had final say over drawing congressional district maps. The state’s high court tossed the Legislature’s map and imposed its own, in a move the lawmakers said violated the rules set out in the U.S. Constitution.

But the case has become a larger test of raw political power in election law, particularly in an era of Donald Trump and election challenges.

David Thompson, representing the state’s lawmakers, said the federal government can always step in to reel in a runaway legislature.

The dispute in North Carolina centered on the Republican-controlled Legislature’s map of congressional districts, drawn after the 2020 census. A state court struck down the map as an illegal partisan gerrymander. The court then imposed its own map.

Republican lawmakers said that ran afoul of the Constitution’s Elections Clause, which reads: “The Times, Places and Manner of holding Elections for Senators and Representatives, shall be prescribed in each State by the Legislature thereof; but the Congress may at any time by Law make or alter such Regulations, except as to the Places of chusing Senators.”

The Republican lawmakers say the clause limits state courts’ ability to get involved. They can intervene on matters of federal law, and perhaps on matters of state law, but not on questions of the state’s constitution.

That has been dubbed the “independent legislature theory.”

Lawyers and justices sparred Wednesday over the history and meaning of the clause and whether it meant only legislatures or whether it meant more general legislative powers, and who can exercise those.

“We’re really trying to kind of figure out when and under what circumstances the state [court] has usurped legislative power,” said Justice Ketanji Brown Jackson.
All sides agreed there was no firm precedent to guide the justices.

“We’re here for the first time dealing with this issue. This is a novel challenge,” said Justice Kagan, though she pointed out that the high court has danced around the matter in some previous decisions and always seemed to find that state courts did have a role to play.

Neal Katyal, arguing for voting-rights groups that opposed the legislators, said if the court rules in favor of the assembly it would wipe out some election rules in all 50 states.
“The blast radius from their theory would sow election chaos,” he said.

Justice Neil M. Gorsuch countered that the alternate universe could be just as scary.

“It depends on whose ox is being gored at one particular time,” he said.

He pointed to Virginia’s attempt to enshrine in its Constitution the designation of enslaved persons as three-fifths of a person. He also cited state courts during the Civil War that wanted to prevent soldiers away fighting the war from being able to vote in elections.

He said it was state legislatures that refused to accept those court rulings.

Justice Samuel A. Alito Jr. wondered about states with Supreme Courts — some elected, others appointed — that are eager to impose themselves in election decisions.

Mr. Katyal said the case should be an easy one for justices who believe the practice at the time the Constitution was written shed light on its meaning. He specifically name-checked Justice Clarence Thomas, and said he’d been waiting 20 years to make this kind of argument before the justice, who is a leader in what’s known as originalism.

“It speaks to your method of interpretation,” Mr. Katyal said.

Justice Thomas, who used to be famously reticent about asking questions during oral argument, later joked that he’d been waiting decades to ask a question of Mr. Katyal, a former acting solicitor general who has argued dozens of cases before the high court.

The case is Moore v. Harper. A decision is expected by the end of June.