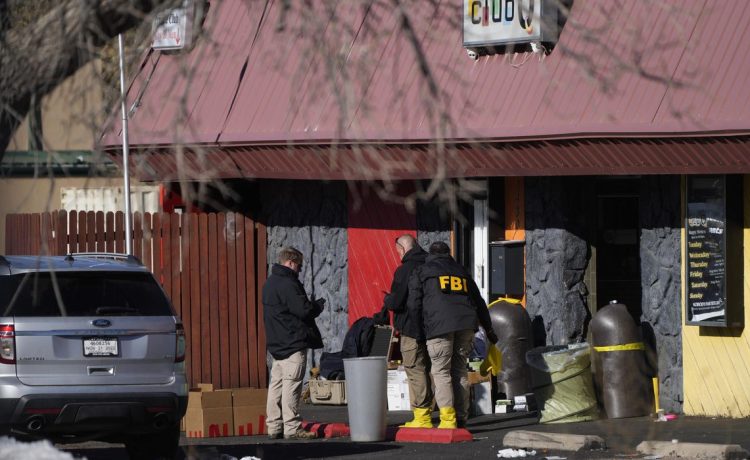 DENVER — The suspect in the deadly massacre at a Colorado Springs gay nightclub identifies as nonbinary, according to defense attorneys, raising questions about whether the attack was motivated by anti-LGBTQ bias.

The disclosure appeared in a court document filed Tuesday by attorneys for Anderson Lee Aldrich, 22, who faces murder and hate-crime charges stemming from the Saturday night shooting at Club Q that left five people dead and 18 injured.

“Anderson Aldrich is nonbinary. They use they/them pronouns, and for the purposes of all formal fillings, will be addressed as Mx. Aldrich,” the attorneys said in a footnote on the filing.

The suspect was released from the hospital Tuesday after being treated for injuries suffered when he was subdued by bar patrons. He is scheduled to appear by video Wednesday from jail at an advisement hearing in El Paso County Court in Colorado Springs.

Those killed in the attack were bartenders Daniel Davis Aston, 28, and Derrick Rump, 38, and patrons Raymond Green Vance, 22, Ashley Paugh, 35, and Kelly Loving, 40.

The charges are only preliminary and not formal, but the decision by prosecutors to raise the hate-crime possibility fueled widespread speculation that the suspect was motivated by anti-gay bias, prompting Democrats to blame conservative rhetoric.

“This attack also comes amidst a rise in violent rhetoric and threats against the LGBTQI+ people across the country,” said White House press secretary Karine Jean-Pierre at Tuesday’s press briefing. “While we don’t know yet for certain the motive of this attack, hate has no place in this country.”

Transportation Secretary Pete Buttigieg tweeted: “If you’re a politician or media figure who sets up the LGBTQ community to be hated and feared — not because any of us ever harmed you but because you find it useful — then don’t you dare act surprised when this kind of violence follows.”

Conservatives responded Wednesday by accusing those on the left of jumping to conclusions to stoke the anti-right narrative.

“The ‘republicans are violent’ crowd sure got quiet after it was discovered the Colorado shooter is non-binary and identifies with they/them pronouns,” tweeted actor Kevin Sorbo.

Christopher Rufo, a senior fellow at the Manhattan Institute, accused the New York Times of publishing a “deranged op-ed claiming that my reporting on drag queen story hour was somehow responsible for the recent shooting in Colorado.”

“Now we find out the shooter identifies as ‘nonbinary’ and uses ‘they/them’ pronouns,” Mr. Rufo tweeted. “The NYT used the tragedy to falsely smear me.”

CNN political commentator Errol Davis raised the possibility that the defense is seeking to counter the hate-crime charges.

The suspect was known as Nicholas Franklin Brink until 2016, when he petitioned the court for a name change, citing the father’s extensive criminal history, according to a petition filed in Bexar County, Texas.

“Minor wishes to protect himself and his future from any connections to birth father and his criminal history. Father has had no contact with minor for several years,” said the petition.