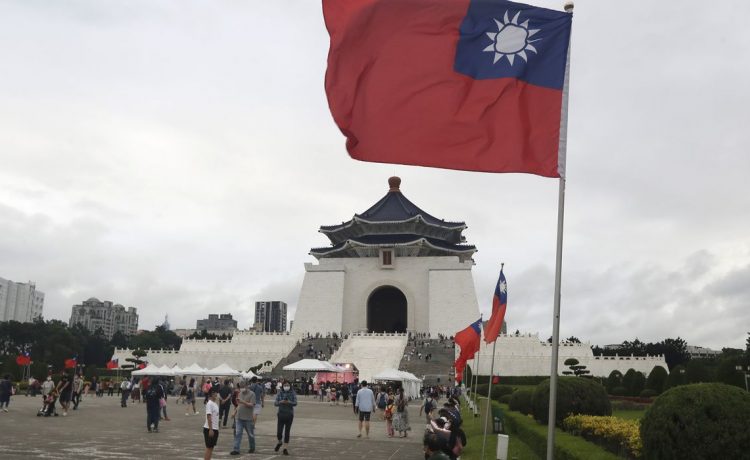 HSINCHU, Taiwan — Hulking white factory buildings tower over the plush vegetation lining the road that snakes through this city, a place long known as Taiwan’s “Silicon Valley,” but increasingly identified as ground zero in a widening new Cold War between the United States and China.

More than 400 of Taiwan’s highest-level private tech firms are located in Hsinchu and several of America’s most iconic, futuristic and influential brands — including Apple, Intel, Microsoft and Lockheed Martin — are either deeply invested in and or heavily reliant on the advanced microchips made here.

“The clients come from everywhere,” says Scott Huang, a researcher at Hsinchu Science Park, whose most prominent operations are at the Taiwan Semiconductor Manufacturing Company (TSMC), the world’s top producer of chips used in everything from smartphones to F-35 fighter jets.

As China’s threat to absorb Taiwan and force it under the control of the Chinese Communist Party grows, Taiwanese officials cite the chip manufacturing sector as the lynchpin of the island democracy’s strategic relevance — a major “why should Americans care” piece of what might otherwise seem like a far off geopolitical fight for Washington to avoid.

Security analysts point to other aspects of Taiwan’s strategic value. The island has one of the more vibrant democracies in East Asia — a bastion of political free speech and U.S.-connected free market capitalism closer to China than any other nation in the region.

Taiwan’s location, halfway down China’s 9,000-mile coastline and directly between the East and South China seas is vital, as Chinese military control over the island could one day hand Beijing naval dominance over the massive flow of goods shipped through those seas to the world.

The government of Taiwanese President Tsai Ing-wen highlights these factors but emphasizes Taiwan’s status as the manufacturer of 90 percent of the world’s most advanced microchips to any debate about why the United States shouldn’t think twice about protecting the island democracy.

“If Taiwan’s semiconductor industry is disrupted in any sense, I think it’s going to impact upon the rest of the world,” says Taiwanese Foreign Minister Joseph Wu, who warns a Chinese attack on Taiwan could trigger global microchip shortages that make the supply chain issues of the COVID-19 era seem like a cakewalk.

Chinese President Xi Jinping has more aggressively pushed Beijing’s goal of absorbing Taiwan since 2019, warning that China could use force to dissolve Taiwan’s democracy, while a recent spike in Chinese military drills and China’s neutrality toward Russia’s Ukraine invasion have sparked concerns Mr. Xi may be preparing for war.

The concerns dovetail with fears that China, which lacks the capability to produce microchips at the level of sophistication manufactured by Taiwan, wants to take over the manufacturing ecosystem in Hsinchu, or at least bring its most dominant companies under communist party control.

U.S. analysts warn such a development could hand Beijing the keys to increasingly advanced chips, which are widely seen as the gateway to the future of the information age, as rapidly advancing processing speeds are predicted to revolutionize human society and weaponry over the coming decades.

It’s a possibility that has thrust the microchip industry to the center of U.S.-China tensions, with the Biden administration now scrambling to try and block U.S. companies and their Taiwanese partners from selling the most advanced semiconductors — so-called Artificial Intelligence or “AI” chips — to buyers in China.

U.S. lawmakers on both sides of the aisle have separately pushed for diversification of chip manufacturing and supply chains beyond Taiwan. The effort galvanized in August, with President Biden signing the “Chips Act” that provides some $52 billion in subsidies for companies to build semiconductor manufacturing facilities in the United States.

“The only country in the world that is a source of the most advanced semiconductors is Taiwan and I would regard that as a resilience risk and also a national security risk,” U.S. Treasury Secretary Janet Yellen told an event hosted by The Atlantic in late September. She added that in addition to increased U.S.-based manufacturing, efforts are being made to work with other “trusted partner countries” to diversify supply chains.

Taiwanese officials say they are not threatened by these developments, but rather seek to embrace them as an opportunity to shift the island away from its current trade dependence on China, whose companies currently purchase substantial amounts of lower-level microchips manufactured in Taiwan.

Taiwanese companies have themselves spent recent years scrambling to increase their own investments in other countries, including the United States, where TSMC began constructing a $12 billion microchip manufacturing plant in Arizona in 2020.

Debate in Washington over Taiwan’s strategic relevance has intensified since August when China expanded the scope of its military drills and missile tests near Taiwan following House Speaker Nancy Pelosi’s visit to the island, which the United States has backed militarily since the 1950s.

The Biden administration responded to the increased Chinese provocations by sending U.S. warships through the 110-mile-wide Taiwan Strait between China and Taiwan.

The move underscored Taiwan’s geographic significance to the security of major maritime shipping routes, a disruption of which by China could endanger the free flow of goods to international markets and badly damage the economies of the U.S. and its allies.

“The waters surrounding Taiwan are home to the busiest shipping lane in the world,” Taiwanese Minister for Economic Affairs, Wang Mei-Hua, said at a recent event hosted by the Center for Strategic and International Studies.

“China, Japan, South Korea and many other countries all depend on the shipping lanes to deliver their goods to the world and vice versa,” said Ms. Wang, noting that Taiwan’s location “at the center of the ‘First Island Chain’ of the West Pacific…serves several strategic purposes both offensive and defensive.”

“If Taiwan were to become under threat or be in crisis, it would not only have a severe impact on global shipping and logistics, but it would also have an impact on the political and economic order of the Indo-Pacific.”

Regional analysts emphasize Taiwan’s significance as an example of democracy and free market connectivity for other nations in a region to follow amid rising Chinese economic dominance and autocratic political pressure from Beijing.

“Taiwan is the first authentic Chinese democracy and a rival political enterprise to the Chinese Communist Party,” says Andrew Scobell at the U.S. Institute of Peace. “Taiwan shows up Beijing’s lie that without the communist party there is no new China and that China isn’t ready for the kind of democracy that the rest of the world has.”

“Taiwan is living proof that Chinese people want democracy and it works quite well,” said Mr. Scobell, who added that Taiwan’s vibrancy as a democracy “influences the calculus in Washington,” as Americans view the China-Taiwan confrontation as one between an “oppressive dictatorship and a little democracy.”

While Taiwan is small, with a population of less than 24 million, the island ranked 16th among the world’s economies in terms of merchandise trade in 2021. What remains to be seen is whether the ranking will improve or take a hit as Taiwan scrambles to diversify its economy by investing in semiconductor operations in other democratic countries.

There are more than a million people of Taiwanese descent in the U.S., and Taiwan embraces aspects of American culture in nuanced ways.

Taiwanese officials say the island’s status as a democracy ties directly to its prowess on the global semiconductor manufacturing landscape, as well as its relevance to the future of a U.S.-aligned global economy.

Mr. Wu told a group of international journalists visiting Taiwan through a program sponsored by the Taiwanese Ministry of Foreign Affairs that other countries “understand the value of having a semiconductor industry or ecosystem, so they would like to have Taiwan make investments.”

“So far, we have been receiving requests to make investments in Japan, in the United States, in Germany, in India, or in Central and Eastern European countries,” the foreign minister said.

“The U.S. demands more and more serious discussions with us, not only with Taiwan but also with Korea and Japan — the so called ‘Fab Four’ — to form an alliance to make sure that the democracies have [their] own supply chain and it’s not conditioned by the authoritarian country, which is China and that we are not providing computer chips for China to use in its weapons systems.”

Some U.S. analysts say Washington should avoid a confrontation with Beijing.

In an analysis circulated by the think tank, Mr. McCallion maintained that if China invades Taiwan, Chinese companies will be cut off from vital U.S. and other inputs to the chip manufacturing industry and would be “unable to resume chip production under new management.”

The U.S. should “avoid provoking” China and “seek to dial down the temperature with Beijing,” Mr. McCallion argued, asserting that efforts by the U.S. to deter China might encourage Beijing to use force, resulting in a military clash Washington seeks to prevent.

“A war between the U.S. and China would be exponentially costlier than any potential semiconductor supply shock resulting from a cross-strait invasion [by China],” he wrote.

But it’s hard to predict how an invasion would impact Taiwan’s silicon valley, where Mr. Huang went to lengths recently to emphasize that the microchip manufacturing industry here would not have happened without robust U.S. investment.

“We thank the Americans a lot,” he said.

Mr. Wu echoed the sentiment from the foreign ministry, asserting that the “supply chain for Taiwan’s semiconductor ecosystem cannot get away from the United States.”

The foreign minister more broadly described Taiwan as part of a “democratic supply chain” and stressed the “source of our technology is coming from the United States.”

“The United States,” he said, “has supported Taiwan to build this whole ecosystem.”