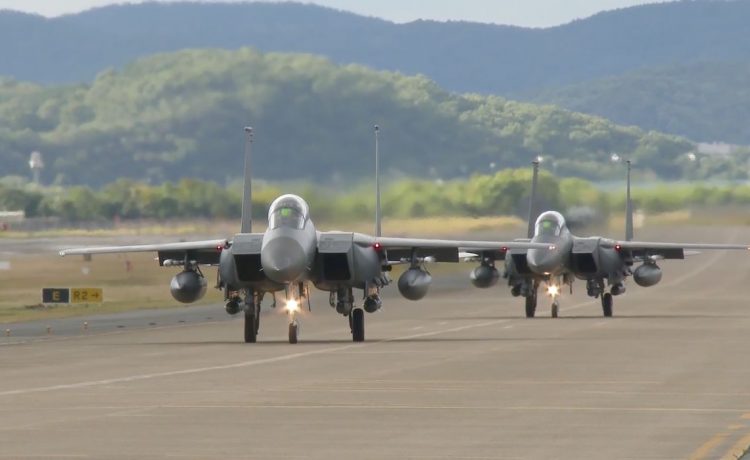 Hours after its sixth ballistic missile launch in less than two weeks, North Korea flew a dozen war planes near its border with South Korea on Thursday, prompting Seoul to scramble 30 military fighter jets sending soaring tensions on the peninsula even higher amid growing fears that Pyongyang may soon test a nuclear weapon.

Such a test — which would be the first for the isolated North Korean regime since 2017 — would pose a major political and security challenge for the Biden administration, which already has its hands full dealing with the fallout from Russia’s invasion of Ukraine and rising tensions with China over the future status of Taiwan.

South Korean military officials said they responded to the North Korean provocation with an “overwhelming” show of force that included test-fires of air-to-surface missiles, South Korea’s Yonhap News Agency reported. Despite the close encounter, there were no clashes between the two sides.

The highly unusual North Korean flights come on the immediate heels of a series of major military drills by U.S. and South Korean troops, which appear to have enraged Pyongyang and led to a record number of missile tests over the past several weeks. The latest test late Wednesday night saw North Korea launch two missiles from its capital region, with both landing in the waters between Japan and the Korean peninsula.

All told, North Korea has fired more than 40 ballistic and cruise missiles over more than 20 launch events so far in 2022.

“North Korea’s continued ballistic missile launches are a grave provocative action that threatens not only the peace and stability of the Korean Peninsula but also the international society,” South Korea’s Joint Chiefs of Staff said, according to Yonhap.

The latest launch came less than two days after North Korea fired an intermediate-range missile that soared over Japanese territory into the Pacific, sparking evacuation alerts and leading the Japanese government to take the rare step of halting commuter trains. That launch is widely viewed as Pyongyang’s most provocative act since 2017, when it last tested a nuclear weapon and led to former President Donald Trump’s now-famous vow to unleash “fire and fury” against North Korea if it targeted U.S. interests.

Officials at the U.S. Indo-Pacific Command said in a statement the launches did not pose an immediate threat to American forces or allies, but they warned the continued tests are examples of “the destabilizing impact” North Korea’s ballistic missile program is having on the region.

Japan and South Korea, which have a tangled and often testy bilateral relationship, have moved closer together in the wake of the North Korean threat.

“The two leaders strongly condemned North Korea’s launch of ballistic missiles as a serious provocation which poses a grave threat to the peace and security of not only the Korean Peninsula, but also Northeast Asia and the international community,” deputy presidential spokesperson Lee Jae-myoung told reporters in Seoul.

“The leaders also agreed that the North’s reckless provocations need to stop, and that such acts will entail a hefty price,” Mr. Lee added.

North Korea’s tightly controlled state press has yet to comment on the barrage of recent missile tests, but Mr. Kim did issue an official congratulations to Russian President Vladimir Putin, who turns 70 on Friday.

“Today Russia is smashing the challenges and threats of the United States and its vassal forces and firmly defending the dignity and fundamental interests of the state,” the statement by Mr. Kim carried in North Korea’s KCNA news agency read in part. “It is unthinkable apart from your outstanding leadership and strong will.”

After the test, the U.S. and South Korea resumed military drills as part of the two nations’ “firm will” to counter Pyongyang’s threats, South Korean military officials said. Those drills included the American aircraft carrier USS Ronald Reagan, which returned to the waters off the South Korean on Wednesday after joint drills with the South Korean and Japanese navies earlier in the week.

The presence of the USS Reagan, coupled with the joint U.S.-South Korean drills, has touched a nerve in Pyongyang. The North Korean Foreign Ministry said in a statement on Thursday that the U.S. aircraft carrier and its strike group pose “a serious threat to the stability of the situation on the Korean peninsula and in its vicinity.”

Pyongyang also condemned an effort in the U.N. Security Council to impose new economic sanctions as a result of its recent weapons tests. Those efforts failed amid resistance from permanent Security Council members China and Russia.

There is some speculation in foreign policy circles that Mr. Kim may be demonstrating his country’s ballistic-missile capability as a bargaining chip for future diplomatic talks with the U.S. and its allies. Such a calculation seemed to be a key part of Mr. Kim’s strategy in the Trump era.

After the 2017 nuclear test, Mr. Kim and Mr. Trump held three in-person meetings in an unprecedented round of direct diplomatic talks. But those talks ended without a firm agreement to curb North Korean weapons programs in exchange for relief from economic sanctions that have helped strangle the country’s economy.

Some national security observers believe Mr. Kim may again be preparing for a nuclear-weapons test as a way to demonstrate to his country’s military capabilities and scare the U.S. and its allies into making concessions in any future negotiations.

But some analysts argue the U.S. should take a much different approach. They say the Pentagon, along with U.S. allies in the region, should develop an aggressive policy of intercepting and destroying North Korean missiles after launch.

“A real breakthrough would be achieving deterrence by denial,” retired Marine Corps Lt. Gen. Wallace Gregson wrote in a recent piece for the website 1945.com.

“We need a comprehensive multi-domain surveillance network and ready shooters. Immediate launch detection followed by target-quality data on the missile passed to the most advantageous shooter on the network that fires autonomously or near-autonomously,” said Lt. Gen. Gregson, now a senior advisor at The Roosevelt Group. “Large doses of autonomy and artificial intelligence are needed to achieve an effective, near-instant, response. The goal is boost phase or early ascent phase intercept. Destroying an enemy missile over enemy territory, especially if it is armed with a weapon of mass destruction, is a very good thing.”