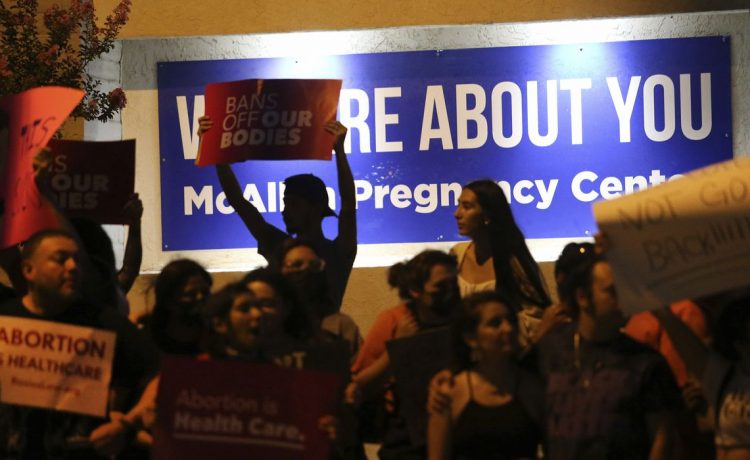 AUSTIN, Texas (AP) — Clinics are shutting down abortion services in Texas after the Supreme Court in the nation’s second-largest state blocked an order that briefly allowed the procedure to resume in some cases. It’s the latest development in legal scrambles taking place across the country following the reversal of reversal of Roe v. Wade. The Friday night ruling stopped a three-day-old order allowing abortions to resume up to six weeks into pregnancy. On Saturday, the American Civil Liberties Union said it doubted that any abortions were now being provided in the state. One provider, Whole Woman’s Health, says the ruling forced it to stop offering the procedure in its four Texas clinics.

AUSTIN, Texas (AP) — Clinics were shutting down abortion services in the nation’s second-largest state Saturday after the Texas Supreme Court blocked an order briefly allowing the procedure to resume in some cases, the latest in legal scrambles taking place across the U.S. following the reversal of Roe v. Wade.

The Friday night ruling stopped a three-day-old order by a Houston judge who said clinics could resume abortions up to six weeks into pregnancy. The following day, the American Civil Liberties Union said it doubted that any abortions were now being provided in a state of nearly 30 million people.

Amy Hagstrom Miller, president of Whole Woman’s Health, said the ruling forced an end to abortions in its four Texas clinics, and workers there were winding down abortion operations and having “heartbreaking conversations” with women whose appointments were canceled.

“I ache for us and for the people we have dedicated our lives to serve with the fabulous abortion care we provide, many who will be denied that right in the months and possibly years to come,” Hagstrom Miller said in a statement.

Planned Parenthood’s multiple affiliates in Texas had not resumed abortion services even after the restraining order was put in place Tuesday.

At issue was a long-dormant 1925 criminal law that targets individuals who perform abortions. Clinics had argued that it was invalid after abortion became a constitutional right across the U.S. in 1973. The U.S. Supreme Court, however, struck down the landmark Roe decision June 24, leaving abortion policy to states.

Separately, Texas has a 2021 law that was designed to ban abortion in the event that Roe were overturned. It takes effect in the weeks ahead.

“Extremist politicians are on a crusade to force Texans into pregnancy and childbirth against their will, no matter how devastating the consequences,” said Julia Kaye of the ACLU.

Providers and patients across the country have been struggling to navigate the evolving legal landscape around abortion laws and access.

In Florida, a law banning abortions after 15 weeks went into effect Friday, the day after a judge called it a violation of the state constitution and said he would sign an order temporarily blocking it next week. The ban could have broader implications in the South, as Florida currently allows greater access to the procedure than neighboring states.

Even when women travel outside states with abortion bans, they may have fewer options to end their pregnancies as the prospect of prosecution follows them.

Planned Parenthood of Montana this week stopped providing medication abortions to patients who live in states with bans.

Planned Parenthood North Central States, which offers the procedure in Minnesota, Iowa and Nebraska, is telling patients they must take both pills in the regimen while in a state that allows abortion.

The use of pills has been the most common method to end a pregnancy since 2000, when the U.S. Food and Drug Administration approved mifepristone, the main drug used in medication abortions. Taken with misoprostol, a drug that causes cramping that empties the womb, it constitutes the abortion pill.

Also Friday, Google, the company behind the internet’s dominant search engine and the Android software that powers most smartphones, said it would automatically purge information about users who visit abortion clinics or other places that could trigger potential legal problems.

In addition to abortion clinics, Google cited counseling centers, fertility centers, addiction treatment facilities, weight loss clinics and cosmetic surgery clinics as destinations that will be erased from location histories. Users have always had the option to edit their location histories on their own, but now Google will do it for them as an added level of protection.

“We’re committed to delivering robust privacy protections for people who use our products, and we will continue to look for new ways to strengthen and improve these protections,” Jen Fitzpatrick, a Google senior vice president, wrote in a blog post.