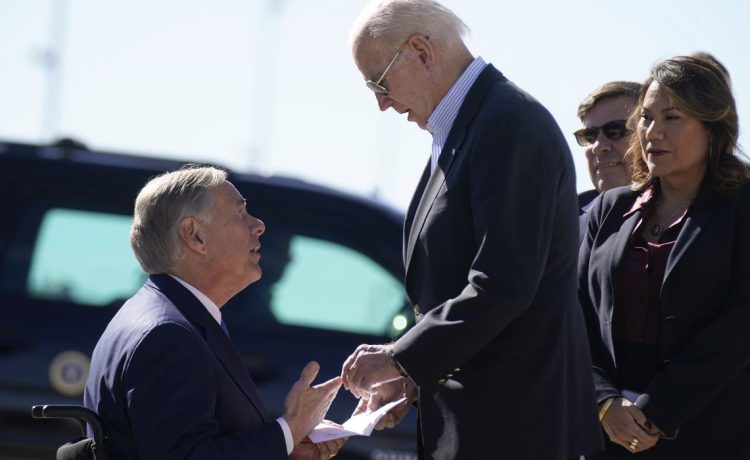 When President Biden landed in El Paso on Sunday, Texas Gov. Greg Abbott was waiting for him with a letter begging the president to swallow his pride and start securing the border

The Republican governor accused Mr. Biden of having “sanitized” the city by ousting migrants who had been swamping the city streets, trying to lessen the visual impact of the surge of illegal immigration.

Mr. Abbott also said Mr. Biden was missing out on the real story because he was scheduled a visit to a border crossing but did not have plans to visit the actual border areas where illegal immigrants are coming with near-impunity.

“Your visit to our southern border with Mexico today is $20 billion too little and two years too late,” Mr. Abbott, a Republican, wrote to the Democratic president. “Even the city you visit has been sanitized of the migrant camps which had overrun downtown El Paso because your Administration wants to shield you from the chaos that Texans experience on a daily basis. This chaos is the direct result of your failure to enforce the immigration laws that Congress enacted.”

Mr. Abbott’s office said he hand-delivered the letter to Mr. Biden, who is making his first presidential trip to the border after having overseen record levels of fentanyl crossing, illegal immigrants encountered, and terrorism suspects detected.

The governor called on Mr. Biden to restart border-wall construction, which the president halted on his first day in office. He also urged Mr. Biden to declare the smuggling cartels as foreign terrorist organizations.

But in a speech last week, Mr. Biden pivoted back toward Mr. Trump’s approach, announcing a new plan to force illegal immigrants from Cuba, Haiti and Nicaragua back into Mexico.

Mr. Biden also said he would fashion a temporary avenue for new immigration using the administration’s power of “parole.”

“Our problems at the border didn’t arise overnight and they’re not going to be solved overnight.  It’s a difficult problem,” Mr. Biden said in announcing the plan.

Mr. Abbott, in his new letter, said turning the parole power into a new system of mass immigration goes beyond the law Congress has written.