Texas wracked by magnitude 5.4 earthquake, the state’s fourth-strongest ever 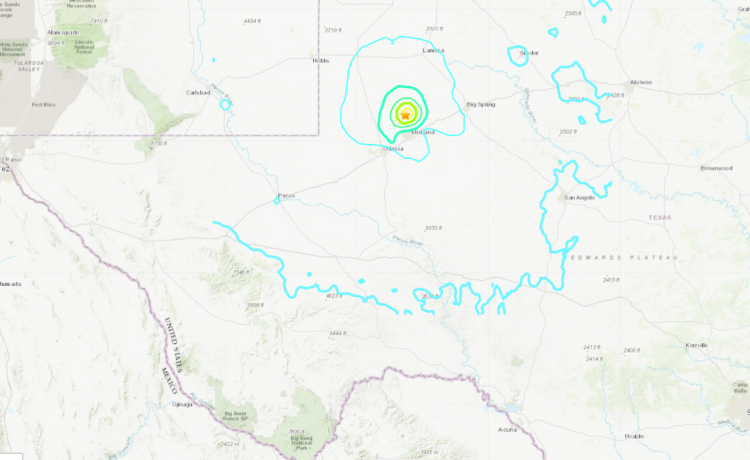 A magnitude 5.4 earthquake wracked Midland, Texas at around 5:35 p.m. local time Friday evening, the fourth-strongest earthquake to ever occur in Texas.

“It’s a sizable earthquake for that region. In that region such an event will be felt for a couple of hundred miles,” Jana Pursley, a geologist with the U.S. Geological Survey’s National Earthquake Information Center, told the Associated Press.

The tremors, which occurred around five miles underground, are considered an intraplate quake; there are no tectonic faults nearby. The region has had frequent seismic activity in recent years, including aftershocks from Friday’s quake.

“Since 2018 about 120 earthquakes of magnitude 2.5 and larger have struck within 31 miles of the recent quake. Larger earthquakes have struck in the broader area. An M5.4 earthquake struck on November 16th, 2022 about 124 miles to the west,” the USGS noted in an analysis of the earthquake.

The USGS also noted that more earthquakes have been occurring in the central and eastern U.S., regions that are not known for tectonic faults that typically cause seismic tremors.

Instead, authorities noted, human activity in the oil industry, including wastewater injection into deep disposal wells as well as fluid withdrawal, oil recovery, and hydraulic fracturing, have contributed to the spike in seismic activity.

Examples of human-induced earthquakes include a March 2020 quake that occurred around 124 miles to the west of Friday’s earthquake in Midland, according to the USGS.

The Midland earthquake is the fourth-strongest quake to strike Texas in the historical record, according to the website Earthquake Track. The three strongest Texas earthquakes are: