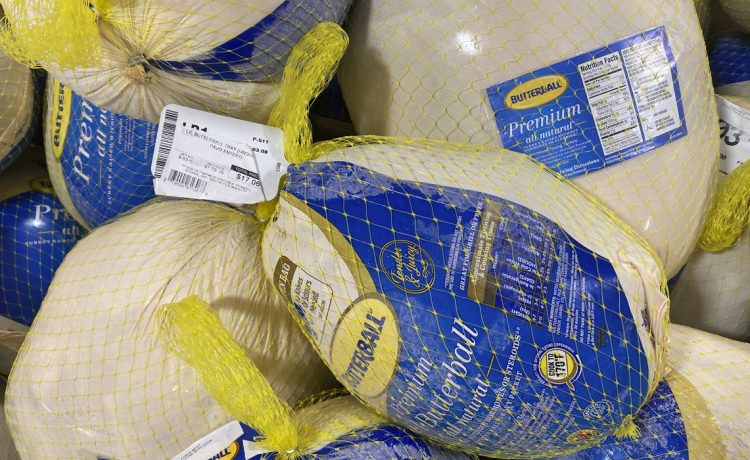 The cost of a turkey dinner has soared by a record high 20% as inflation eats into Thanksgiving budgets, the American Farm Bureau Federation says.

It’s the sharpest year-over-year increase the farm bureau has measured in 37 years of surveys tracking the prices of turkey, stuffing, sweet potatoes, pumpkin pie and other staples.

The farm bureau blamed the increases on stubbornly high inflation rates of 7%-9% in recent months and a 12% year-over-year increase in the most recent Consumer Price Index for food consumed at home.

“We should not take our food supply for granted,” farm bureau President Zippy Duvall said in a statement.

Turkey led the way, increasing to $28.96 for a 16-pound bird, or $1.81 per pound. That is up 21% from last year for several reasons, including an outbreak of bird flu that the U.S. Department of Agriculture says led to the death or culling of 6 million turkeys, or about 14% of the U.S. turkey population.

A 14-ounce bag of cubed stuffing mix saw the highest percentage increase of any item, rising 69% to $3.88 from last year.

“Farmers are working hard to meet growing demands for food — both here in the U.S. and globally — while facing rising prices for fuel, fertilizer and other inputs,” said farm bureau chief economist Roger Cryan.

Despite the increases, the farm bureau said shoppers in most regions of the country should find cheaper frozen turkeys as stores cut prices over the next week.

Other factors in rising turkey prices include supply chain disruptions and increased feed costs, according to food industry officials who say it could reduce the portion size this year.

The farm bureau survey found in a separate estimate that the prices of ham, Russet potatoes and frozen green beans are up 18% from last year. Adding these foods to the classic Thanksgiving menu that the group has measured since 1986 will increase the overall cost of this year’s meal by $17.25 to $81.30.

Heather Garlich, a senior vice president at FMI — The Food Industry Association, said grocers are doing their best to keep items in stock as food prices keep rising heading into 2023.

“I’ve heard from many of our members that turkey will be available, but depending on the supplier, some stores might have smaller birds this year,” Ms. Garlich said.

In a recent U.S. Grocery Shopper Trends holiday survey, FMI reported that 71% of consumers planned to adjust their holiday meals this year. Shoppers said they planned to look for deals, buy store brands, prepare dishes at home, make product substitutions or even ask others to contribute side dishes to their holiday gatherings.

Between mid-October and mid-November, Datasembly reported that prices went up an average of 11% for frozen turkey and 19% for fresh turkey from the same period last year.

“With months of record-breaking inflation, it’s no surprise that families will be spending more on Thanksgiving dinner this year than in 2021,” said Datasembly CEO Ben Reich.