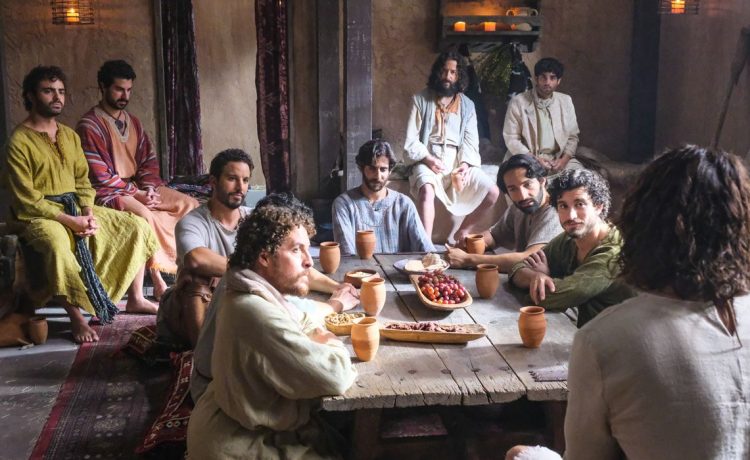 “The Chosen,” the streaming series about the life of Jesus that’s become a runaway hit, has developed some transitions in its third season, both in the story and how the show is funded.

This isn’t your grandparents’ Bible epic, in which a tale is told from beginning to end in two hours. Instead, the series offers what one critic calls “plausible fiction” to flesh out the New Testament accounts of Jesus and his 12 disciples.

Alongside traditional depictions of biblical events, viewers get a scene of Simon, later Peter, trying to get some “alone time” with his wife only to be interrupted by other disciples seeking a place to stay. Meanwhile, former tax collector Matthew sees his relationship with his father ruptured and later restored.

And Jesus is shown contemplating a situation in which his life would be at risk and discussing it with his mother in a conversation you’ll never find in the Bible.

Such episodes are “not in Scripture,” says Adam R. Holz, director of Focus on the Family’s PluggedIn movie and TV review website, but they don’t “contradict Scripture, either.”

Mr. Holz said this expanded approach “puts skin on these characters in a way that allows us to say, ‘Oh, wow, I never thought about what that might actually be like. I think it does it in a way that they are attempting to be faithful to biblical theology, even as they’re giving us a dramatization that they admit is fictionalized.”

A little augmentation will likely be necessary: If creator Dallas Jenkins’ stated goal of producing seven seasons of eight episodes apiece comes to fruition, he’ll have more than 56 hours to tell a story that readers of John’s Gospel can digest in a one-hour reading.

Audiences are responding to the unusual approach. Not only are the episodes popular on streaming platforms such as YouTube, but the app for the show is also popular on Apple and Android devices.

Most of all, some 1.2 million people paid to sit in movie theaters across the country to view the first two episodes of season 3, which dropped this month, and many still came back to view them online, producers said.

“We were continually No. 2 to No. 3 in the box office for the first two weekends, which is extraordinary,” Katherine Warnock, vice president of original content for the series, said in an interview. “We were up against, you know, some Oscar darlings and up against Marvel [films]. Our per average theater taking blew our counterparts out of the water Marvel aside, of course.”

Ms. Warnock didn’t have initial figures on the number of home streamings of the episodes, but said “we were blown away by even the attendance to the live streams,” given the massive theatre audience.

An estimated 500 million people have viewed “The Chosen” online worldwide, said Sister Nancy Usselmann, a member of the Roman Catholic Daughters of St. Paul who directs the Pauline Media Center in Los Angeles and blogs about movies and television.

The series, she said, “breaks new ground because it’s the only series on the life of Christ that has ever been made.”

The planned number of seasons “allows you to go a little more in-depth into the characters, into each person and to their own journey of faith,” Sister Usselmann said. Just as present-day believers have a “process” of spiritual growth and understanding, so did the disciples, she said.

“I think that’s why a series is working so well, because it’s helping us to connect with that” journey and the certainty of faith found by those disciples, she said.

Sister Usselmann said it was “very creative” for Mr. Jenkins and his team to start with a crowdfunding campaign. She said that early contributors to the show’s “pay it forward” model were also enthusiastic about the show and helped popularize it by telling others.

This year, Ms. Warnock said, the series has joined up with a charity, the Come and See Foundation, “which has now allowed us to shift … into a donation model, [which] is brand new for us.”

The producer said donations and sales of merchandise related to “The Chosen” are the two main financial models, with donations going “almost entirely” to production, and merchandise sales covering staff salaries and ancillary productions.

Mr. Holz, the PluggedIn reviewer, says the show has become “a phenomenon” that stands a good chance of long-term success.

“As long as the storytelling continues to be at the level that it has been, I think his [financial] model will likely continue to be successful,” he said.

Another difference in how “The Chosen” reaches audiences is its release schedule. Unlike other streaming shows such as Netflix’s “The Crown,” the faith-focused series does not release its entire eight-episode season at once. Ms. Warnock said “we’re just trying a weekly cadence” of episode releases because post-production work continues on the completed episodes.

She said the show’s “amazing team” will ensure they don’t miss a Sunday release, “God willing.”

Ms. Warnock said the series will also examine “How does Jesus respond to that when we have very strong emotions, in response, and I think that is something the world at large can relate to, no matter your faith background, so we’re excited for that to roll out.”

Without disclosing specifics, she said “two of our characters experience a profound loss this season and have to journey that through in their relationship with God. What does that mean and to invite God into the process, especially when maybe you don’t want to?”

But “we also see a lot of triumph” in this season, Ms. Warnock said. There will be healings and miracles, and “some of our favorite Bible stories come to life.”

Among those will be the feeding of the 5,000, which the executive said involved 12,000 extras over three days of filming “in the middle of the scorching heat of Texas,” she said. The Salvation Army’s Camp Hoblitzelle, in Midlothian, Texas, is the location for much of the show’s production. Those who have participated in the “pay it forward” funding campaigns in the first three seasons are often invited to be “extras” on site.

Sister Usselmann applauded the wide-angle approach the series is taking to the New Testament accounts, with Mr. Jenkins and his collaborators putting flesh and sinew on individuals given only a mention or whose stories are incomplete.

“It’s not a word-for-word exposition of the Gospel, but it’s showing us some visuals, and it’s giving us some words that we’re filling in,” she said. “It makes the Gospel come alive in a way that perhaps just by reading it, doesn’t do for some people, and I think they do it masterfully.”