The Great Days > News > The war over ‘woke’: Republicans gear up to take aim at controversial Pentagon social policies
News

The war over ‘woke’: Republicans gear up to take aim at controversial Pentagon social policies 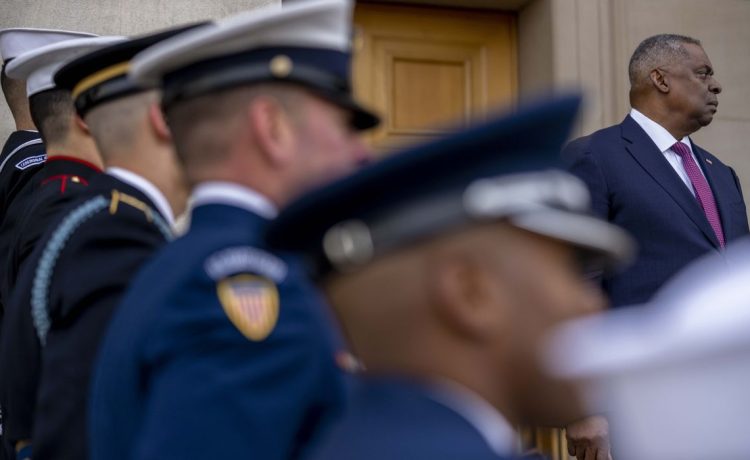 Top officials at the Pentagon insist they’ve seen no impact from so-called “woke” social policies inside the U.S. military.

But public confidence in the military has plunged in recent years, with polls showing that 50% of Americans cite those practices as one of the main reasons for their diminished opinion about the armed forces. Republican lawmakers say they’ve heard from scores of service members who claim the Pentagon’s growing focus on liberal social policies is distracting from the military’s larger mission.

Those dueling worldviews will be thrust into the spotlight when Republicans take control of the House in January, as key figures in the GOP are set to zero in on the apparent gulf between the priorities of the Pentagon brass and the experiences of those in the rank and file.

“There’s a massive disconnect. I think you have to be almost willfully blind to it,” said Rep. Mike Gallagher, Wisconsin Republican, a former Marine himself and the incoming chairman of the House’s new House Select Committee on China.

Mr. Gallagher cited the most recent Ronald Reagan Institute defense survey, released earlier this month, showing 50% of Americans cite “woke practices” as a key reason for their decreased confidence in the military.

The debate over so-called woke policies — the teaching of critical race theory, a disproportionate focus on diversity and inclusivity training, gender identity, even the Pentagon’s recent fight to demand mandatory COVID-19 vaccination for all those in the ranks — is nearing the boiling point. But Pentagon officials for the most part deny that a woke agenda, however defined, exists at all.

To that point, Marine Corps Commandant Gen. David Berger was asked earlier this month if he’s seen any fallout inside the Corps from the fight over woke policies.

“I don’t see it. I don’t hear it. They’re not talking about it. It’s not a factor for them at all,” he said at a Reagan National Defense Forum event, according to the news outlet Defense One. “I don’t see a conversation or an impact of woke-ism in the rank and file, at all.”

Mr. Gallagher said he doesn’t believe Gen. Berger was lying. Rather, the nature and consequences of woke policies in the military may not be something that service members raise with their superiors.

“You’re probably not going to get the most frank discussion when you’re dealing with a four-star general,” he told The Times. “It doesn’t surprise me they’re not hearing about it.”

Republicans cite a host of examples, ranging from the teaching of critical race theory at some military institutions to last spring’s military-wide “stand-down” during which all service members were ordered to spend a day discussing hateful ideologies, bigotry, discrimination and related issues. Defense Secretary Lloyd Austin’s stand-down order came just weeks after the Jan. 6 attack on the U.S. Capitol.

The campaign against far-right extremism and ultra-nationalism in the ranks turned up just a minuscule number of cases, and critics say the focus on social issues takes away from the overriding priority of molding an effective fighting force to defend the country.

“Our military has become the woke military, not the lethal military,” Sen. Rick Scott, Florida Republican and Navy veteran, complained this summer.

The Jan. 6 riot itself has become a part of the debate. In testimony before Congress in June 2020, Chairman of the Joint Chiefs of Staff Gen. Mark A. Milley suggested racism was a factor in the attack by supporters of President Trump — many of whom were military veterans — trying to stop the counting of electoral ballots in the 2020 presidential election, and that those who serve in uniform in the armed services should understand that.

“I want to understand White rage, and I’m white,” he said on June 23, 2020. “What is it that caused thousands of people to assault this building and try to overturn the Constitution of the United States?”

The Army general faced stiff criticism for seemingly implying a direct racial connection to the events of Jan. 6. A month after his comments, he promised to address the topic more fully at a later date.

He has also steadfastly maintained that the military is an apolitical institution.

Beyond the specifics of critical race theory, or American taxpayers paying for gender-reassignment surgeries for service members, critics say the Biden administration has implemented a top-down agenda that emphasizes diversity over virtually everything else, including lethality.

Training for American soldiers, sailors, Marines and pilots “must never be corrupted to serve political ends,” Trump administration Secretary of State Mike Pompeo, a former West Point grad and Army captain, wrote in an opinion piece for Fox News this summer. “… Under the Biden administration, warfighting doctrines are being replaced – even at the training level – with doctrines of diversity, equity and inclusion.”

The administration vehemently denies that it is pursuing a woke agenda. Pentagon officials argue that a diverse military better reflects a diverse country and in the end improves effectiveness. They say that rooting out extremism, promoting equality and creating a culture of inclusiveness makes the U.S. military a better fighting force.

“I was in the military for 30 years, and I can tell you, things like diversity and inclusion, that makes us a better military,” then-Pentagon spokesman John Kirby, a former admiral now at the National Security Council, told Fox in an interview early this year, “because it brings to the fore in the  operational decision making that we conduct better ideas, more unique perspectives, somebody else’s lived experiences which might actually make us smarter on the battlefield.”

But Alabama Rep. Mike Rogers, the ranking Republican on the House Armed Services Committee in line to take the gavel next month, has signaled the woke debate isn’t going away.

“Our troops should not be the vanguard for the left’s social agenda, next year, the new majority will be conducting robust oversight of these issues and we will demand accountability from this administration,” Mr. Rogers said in a statement earlier this month. “Americans are growing increasingly concerned with the direction of the military in recent years. [The Defense Department’s] current political appointees are pushing questionable policies on our troops just to satisfy the ideological agenda of a minority of Americans.”

The looming fight over woke military policies is part of a broader culture war brewing between conservatives and the Biden administration’s military leadership.

President Biden’s Pentagon is also taking fire from Republicans over its plan to pay for female service members to travel out of state to get an abortion. Under the policy, the Defense Department would pay for travel and other associated costs if the service member could not legally access reproductive health care services, including abortions, in the state where they’re stationed.

The policy offered the biggest clue to date about how the U.S. military under President Biden and Defense Secretary Lloyd Austin will handle access to abortions following the Supreme Court’s June decision reversing the landmark Roe v. Wade ruling, and rolled back the constitutional right to an abortion.

The Pentagon memo suggests that the Defense Department will move aggressively to ensure that female troops have equal access to abortions, even if they’re stationed in states that restrict the practice. In a memo outlining the policy, Mr. Austin said the time and money some service members would have to spend seeking reproductive health care would hurt the armed forces.

“In my judgment, such effects qualify as unusual, extraordinary, hardship or emergency circumstances for service members and their dependents and will interfere with our ability to recruit, retain and maintain the readiness of a highly qualified force,” he wrote.

Republicans blasted the policy. And with the House soon under their control, all abortion-related issues in the military will get significant attention — though it’s unclear whether they can block or alter the policy, especially with Democrats still in command of the Senate.

On another hot-button issue, Republicans and Democrats joined together in the recent National Defense Authorization Act to repeal the military’s COVID-19 vaccine mandate, which was responsible for forcing thousands of soldiers, sailors, airmen and Marines out of the military. Mr. Biden signed the NDAA into law despite supporting Mr. Austin’s position that the mandate should have been kept in place.

There are still questions about just how much of an impact that policy had. Mr. Austin said earlier this month he’s seen no data showing that the vaccine mandate has had any impact on military readiness, and he stood by the policy even as its support on Capitol Hill plummeted.

“We lost a million people to this virus,” he said earlier this month. “A million people died in the United States of America. We lost hundreds in [Defense Department]. So this mandate has kept people healthy.”

But thousands of service members have been kicked out for refusing to get the vaccine, despite military services falling far short of recruiting goals this year. The Army, for example, missed its 2022 recruiting goal by more than 20% and has kicked out 1,861 soldiers for not getting the vaccine, according to its most recent COVID-19 statistics.

Even Democrats such as outgoing House Armed Services Committee Chairman Adam Smith of Washington state displayed a lack of enthusiasm for vigorously backing the Pentagon in the COVID mandate fight.

“At this point in time, does it make sense to have that policy from August 2021? That is a discussion that I am open to and that we’re having,” Mr. Smith said shortly before the vaccine mandate repeal was included in the compromise bill.