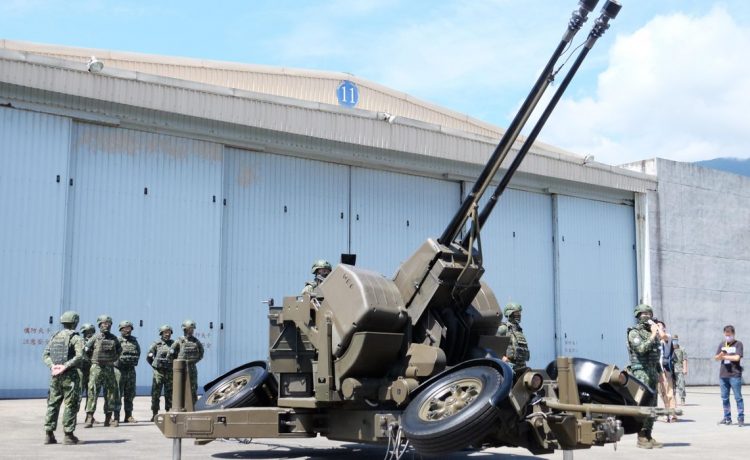 TAIPEI — The world must prepare for the prospect that China could militarily invade Taiwan as soon as next year, the island democracy’s foreign minister warned in an interview Thursday, saying that Taiwan’s people and defense forces are drawing inspiration from Ukraine’s fight against Russia as they confront the possibility of an attack by its massive neighbor just across the Taiwan Strait.

Chinese President Xi Jinping has warned since 2019 that Beijing could use force to dissolve Taiwan’s democracy and absorb it under Communist Party rule, and the recent spike in military drills, coupled with China’s ambivalence over Russia’s Ukraine invasion, has sparked growing concern in Taipei that Chinese Communist Party leaders are preparing for war, Foreign Minister Joseph Wu said.

When it comes, he added, Taiwan will be ready to resist.

“The will to fight here in Taiwan is higher than ever, especially after seeing what happened in Ukraine,” said Mr. Wu, who stressed that China’s expansion of military drills and missile tests near Taiwan following House Speaker Nancy Pelosi’s visit to the island last month were a clear signal that Beijing is practicing for a “future invasion.”

“Putting it very simply, they talk about it and they practice for it and therefore the threat for Taiwan is real, and we sense it and we understand the urgency. Therefore we also try to prepare for the worst possible day to come,” Mr. Wu said Thursday.

Mr. Xi has talked of preferring a “peaceful” reunification, but is under growing pressure from nationalists in his own party to seize a window of opportunity amid fears in Beijing the U.S. is stepping up military and diplomatic support for an independent Taiwan.

“It’s going to be very hard to guess when that will happen, whether it’s 2023 or 2025, 2027 or 2035,” the Taiwanese foreign minister said. “Every guess has its own merit, but the government here in Taiwan does not have that kind of luxury to guess when [the Chinese] will attack Taiwan.”

“What we need to do is to make ourselves fully prepared so that whenever China thinks the conditions are right for them to attack against Taiwan, we are prepared and we are able to defend ourselves,” he told journalists from international news outlets, including The Washington Times, visiting the island democracy on a program sponsored by the Taiwanese Ministry of Foreign Affairs.

His comments come amid heightened U.S.-China tensions over Beijing’s increasingly provocative military moves toward Taiwan. The Biden administration has recently sent U.S. warships through the 90-mile wide Taiwan Strait between China and Taiwan in a show of support for the island democracy.

President Biden has also signaled in multiple interviews that the U.S. military would come to Taiwan’s aid in the event of a Chinese attack. But his administration has also adhered to the so-called “One China” policy — an approach in which Washington has long acknowledged Beijing’s position that Taiwan is part of China, even though the U.S. maintains informal diplomatic relations and substantial defense ties with the island democracy and does not technically recognize Chinese sovereignty over it.

Taiwan and the U.S. have close economic ties, with American companies heavily tied to Taiwan’s status as the world’s leading manufacturer of semiconductor chips that are vital to the global production of everything from smartphones to laptop computers, cars and refrigerators.

A State Department fact sheet circulated in May underscored the importance of Taiwan’s semiconductor industry. However, the fact sheet said U.S. officials “do not support Taiwan independence,” but “expect cross-Strait differences to be resolved by peaceful means.” It also said U.S. officials “oppose any unilateral changes to the status quo from either side.”

The Biden administration’s approach has drawn criticism from some, including former Trump administration Secretary of State Mike Pompeo, who has called for official recognition of Taiwan’s independence. During a visit to Taipei this week, Mr. Pompeo accused Mr. Biden of making “muddled and confusing statements” about Washington’s Taiwan policy.

“Concerning America’s true commitment to Taiwan, the ambiguity that had been American policy has now become even more ambiguous,” the former Secretary of State said Tuesday, according to Agence France-Presse. “This concerns me greatly.”

China, meanwhile, says it is the Biden administration which has been escalating regional tensions and encouraging pro-independence forces in Taiwan, forcing Beijing to respond. Chinese Foreign Minister Wang Yi warned last week after a meeting with Secretary of State Antony Blinken on the sidelines of the U.N. General Assembly that the U.S. has been sending “very wrong, dangerous signals” on Taiwan — and that Taipei’s assertions of independence from China increase the likelihood of confrontation.

Some in Taiwan say the government of Taiwanese President Tsai Ing-wen should do more to push for diplomatic dialogue channels with mainland China to lower tensions.

Mr. Wu said Thursday that such channels have been cut off in recent years and that Beijing was to blame.

China has “conducted more and more military exercises around Taiwan, in the air or on the surface, or engaged in hybrid warfare, including a disinformation campaign and cyberattacks,” he said. Chinese cyberattacks succeeded in briefly taking down his own Ministry of Foreign Affairs’ website on at least two occasions, he said.

While Taiwan and China continue to maintain robust trade relations, Beijing is engaging in “economic coercion,” having banned more than 100 Taiwanese companies from exporting to China in the wake of Mrs. Pelosi’s controversial visit to Taiwan last month, one of a number of congressional and U.S. trade missions visiting Taipei this year.

More broadly, Mr. Wu said, China used the Pelosi visit to “practice their playbook of their future invasion against Taiwan.”

When asked about U.S. policy toward Taiwan, Mr. Wu said Taipei has confidence in continued U.S. support and appreciates there are debates in Washington. At the same time, he said that “if the United States is willing to consider more openness to its relationship with Taiwan — to allow higher level official exchanges with us — that would be highly welcomed by the Taiwanese government.”

With regard to Mr. Biden’s comments about militarily defending Taiwan in the event of a Chinese attack, the foreign minister said “Taiwan has the will to defend itself and it is Taiwan’s responsibility to defend itself.”

“If we are not willing to defend ourselves, we don’t have any right to ask any other countries to sacrifice themselves in helping or defending Taiwan,” he said. “That is the most fundamental policy of our side.”

Mr. Wu said Russia’s invasion of Ukraine has underscored the reality of the threat facing Taiwan, and that the unexpectedly stout response by Ukrainian military and democracies that have supported Kyiv so far offer a guide for Taiwan as it prepares the prospect of a Chinese attack.

“If you look at the Ukrainian people, their will to defend their freedom, they are truly inspirational to the Taiwanese people,” the foreign minister said.

“In the days before the Russian invasion,” he said, “many people might say that the war launched by China against Taiwan is still quite remote, but when we saw the TV footage of what the Russians did to the Ukrainians, the people here sensed that maybe the war is not that far from us and therefore we better be realistic about the possibility of China’s war against Taiwan.”

But some Taiwan-based observers are skeptical of the island’s ability to defend itself.

Critics in Washington and Taipei point to the quality of Taiwan’s soldiers, compared to the battle-hardened and NATO-trained troops Ukraine can put in the field. As the fear of an imminent Chinese invasion receded in recent years, the mandatory term of military training and service for Taiwanese draftees fell from as long as two years to just four months. Many of the big-ticket items on the Taiwanese Defense Ministry’s shopping list won’t be deployable for years, at a time when many feel Mr. Xi may be speeding up the timetable for military action.

“It’s a popular idea for the news media that Taiwan could emulate Ukraine in the event of a Chinese invasion, but it’s not accurate,” Mr. Minnick said.

The situation is made more complex by the nature of China’s current military moves, and the fact that unlike Russia’s invasion of Ukraine, the People’s Liberation Army faces a much more complex air and naval operation crossing the 110-mile-wide Taiwan Strait in any full-scale assault on Taiwan.

For now, China is engaged in “grey-zone” provocations against Taiwan, including “military pressure below the threshold of a military attack,” said Mr. Wu. Fleets of Chinese fighter planes routinely violate Taiwan’s air defense zone, forcing the island’s own air forces to scramble to confront them.

What would ultimately amount to an act of war by Beijing is a subject of debate in Taiwan.

A senior Taiwanese security official told Reuters on background last week that a Chinese blockade of Taiwan or the seizure of an offshore island would be considered an act of war and Taiwan would not surrender.

In the interim, Mr. Wu said Thursday that the current “grey-zone” provocations are “something that we have been coping with and this is probably the most difficult part. We see the Chinese airplanes coming, but we are not going to fire the first shot to start a war and therefore the Chinese know that so they keep coming.”