Three smuggling suspects in custody after 50 migrants die in Texas 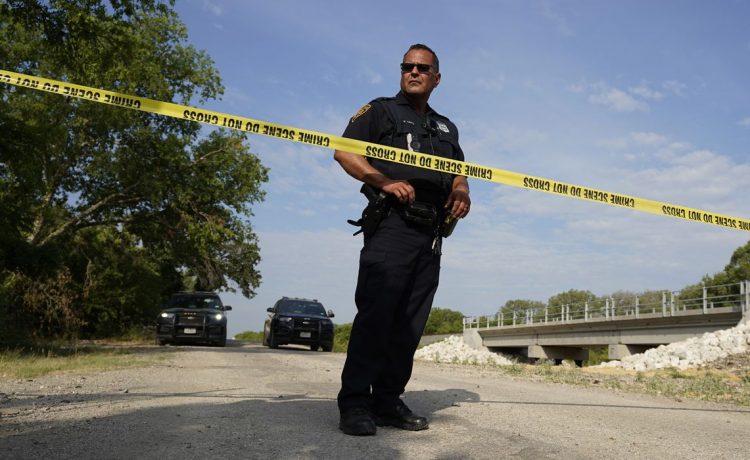 Federal investigators said they have three smuggling suspects in custody Tuesday and at least 50 migrants are dead of heat exposure after being trapped in the back of a truck in the hot Texas sun.

The truck was found on a country road in San Antonio. The fatalities mark one of the worst tragedies in border history and ignited a search for answers to the growing migrant death toll under President Biden.

The president blamed smugglers, though his critics — including Texas Gov. Greg Abbott — said it was Mr. Biden who lured the migrants to make the journey through his relaxed border policies.

“These deaths are on Biden,” he said on Twitter. “They are a result of his deadly open border policies. They show the deadly consequences of his refusal to enforce the law.”

Mr. Biden said that was “political grandstanding around tragedy” and called it “shameful.”

He called the deaths “horrifying and heartbreaking.”

“This incident underscores the need to go after the multi-billion dollar criminal smuggling industry preying on migrants and leading to far too many innocent deaths,” the president said.

Homeland Security Investigations, which is leading the probe, confirmed Tuesday it has detained three people “believed to be part of the smuggling conspiracy.”

Authorities said they were alerted to the truck Monday after a city employee heard a cry for help coming from inside the truck.

When police arrived they found 46 dead bodies stacked inside. Others in the truck were unconscious. Sixteen people, including four children, were rushed to the hospital. By Tuesday morning some of the 16 had succumbed, bringing the death toll to 50.

All of the injuries were heat-related, authorities said. Temperatures had topped 100 degrees Fahrenheit in San Antonio on Monday.

Authorities couldn’t say whether other people had been in the truck but absconded by the time police arrived.

Investigators also didn’t say anything about the route the migrants took, though the road where the truck was found runs alongside Interstate 35, which is among the most popular smuggling routes into the U.S.

Migrants swim or raft the Rio Grande, then hole up at stash houses in Laredo until smugglers stuff them into cars or trucks and try to break them through the cordon of highway checkpoints the Border Patrol runs. The checkpoint just north of Laredo is among the most active, particularly when it comes to truckloads of migrants.

In just the last two weeks Border Patrol agents have nabbed truckloads of 60, 93, 71 and 102 people. Migrants caught in those incidents told agents they paid anywhere from $2,000 to $10,000 to be smuggled into the U.S.

Authorities have not revealed the nationalities of those in Monday’s tragedy, but Mexicans make up most of the migrants who agents catch on the route from Laredo to San Antonio, with Central Americans also prominent among them.

The southern border has set records for chaos under Mr. Biden, who took office and reversed several get-tough policies the Trump administration had put in place.

Illegal migration quickly soared and has remained at a record pace in the 17 months since Inauguration Day, defying Mr. Biden’s insistence that the numbers were seasonal and nothing out of the ordinary.

Indeed, May marked the worst month on record in terms of people caught jumping the southern border.

More people coming also means more people dying in the summer heat, freezing in the mountains in the winter, drowning in the Rio Grande or otherwise succumbing to the dangers of the journey.

The Border Patrol set a record last year for most migrant deaths recorded. The agency has not reported figures for 2022, but based on the pace of individual news releases about deaths, this year is also looking grim.

Among those deaths were two migrants found earlier this month in the back of a truck in La Salle County, also along the route from Laredo to San Antonio. They were part of more than 110 migrants packed into the truck, which was abandoned along the side of the road.

Plenty of people are getting rich off the traffic.

A person charged with operating a stash house connected to the La Salle County smuggling case told investigators he was paid $150 for each migrant harbored. Foot guides, who lead migrants across the Rio Grande, can make $100 per person.

Drivers who shuttle migrants around Laredo can collect a couple hundred dollars, while those who make the longer runs deep into the U.S., braving the highway checkpoints, can earn $2,000 or more for each person.

Truck drivers who carry large loads can earn far more. One drive nabbed making the Laredo-to-San Antonio run last month with 110 migrants told agents he was getting $60,000 for that one trip.

While Republicans blamed Mr. Biden and the president blames smugglers, immigrant-rights groups lashed out at all sides.

They said border controls that make it tough to come in are pushing people to run bigger risks, leading to more deaths.

“We need a welcoming immigration system that recognizes the humanity of all people,” said RAICES, a legal assistance organization for migrants. “If the Biden administration continues to illegally turn away migrants and deny their chance to rightfully seek asylum, individuals and families escaping persecution, war and climate disasters will continue to face violence and death.”

“Learning of this tragedy, during a heat wave most certainly exacerbated by climate change, four days following the failure of the Supreme Court to protect the constitutional right to an abortion, and just weeks following a series of mass shootings is utterly devastating,” said Monica Ramirez, the group’s president. “We cannot separate these occurrences from one another because they are inextricably tied to the fact that countless systems in the United States exclude, fail and harm our communities. The systems are intentionally designed to fail migrants, women, and their families.”