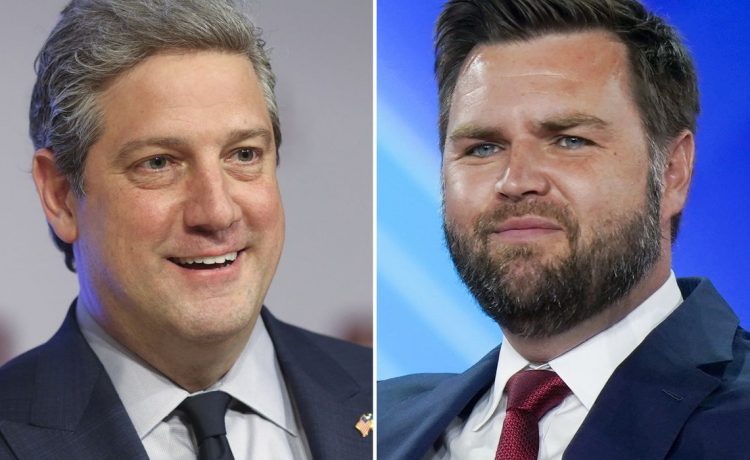 Democrat Rep. Tim Ryan and his GOP rival for the Senate J.D. Vance jousted Monday over who would be more of an independent voice for Ohio and less of a lapdog for party leaders.

Mr. Vance said Mr. Ryan’s line of attack is bogus and that the Democrat’s record of falling in behind Mr. Biden and Mrs. Pelosi proves he is the real “fraud” in the race.

“You vote with her 100% of the time,” Mr. Vance said of the San Francisco Democrat. “So you can’t run from the policies that she has supported, that she has shoved down the throat of the people of Ohio.”

Mr. Vance dismissed the idea that he is an “ass-kisser,” saying Mr. Trump jokingly called him that at a rally and saying Mr. Ryan is the one who sucks up to national party leaders.

Mr. Ryan pushed back, saying he challenged Mrs. Pelosi in 2016 for party leadership, and saying he has come out against the Biden agenda from time to time.

“You have to have the courage to take on your own leaders,” Mr. Ryan said to Mr. Vance. “These leaders in D.C., they will eat you up like a chew toy.”

But “then you kissed his ass, and then he endorsed you,” Mr. Ryan said. “If you can’t even stand up for yourself how are you going to stand up for the people of this state?”

In their second and last scheduled debate, Mr. Ryan and Mr. Vance sought to make the most of their primetime showdown, signaling the fact they are running out of time to leave a positive impression on Ohioans, who have already started to vote.

They lined up on opposite sides of a push by Sen. Lindsey Graham, South Carolina Republican, for a federal ban on abortion of 15 weeks, with exceptions granted in cases of rape, incest, and the life or health of the mother.

Mr. Ryan said that if elected, he would “spend all my time trying to fight a national abortion ban.”

Mr. Vance said the thrust behind Mr. Graham’s legislation “is totally reasonable” and sought to put Mr. Ryan on the defensive.

“His actual voting record has been supporting abortion without limits,” Mr. Vance said. “As much as you have called me an extremist, you are the extremist on this issue.”

On guns, Mr. Ryan said he supports closing the so-called gun show loophole and making it harder for people to obtain “weapons of war.”

Mr. Vance said the media’s obsession with the Jan. 6 attack on the U.S. Capitol has taken attention away from the policy failures of Democrats and the challenges people are facing on a daily basis.

He said the House select committee on the riot was never interested in getting to the truth.

Mr. Ryan said the attack on the Capitol needed to be investigated and said the select panel has done so in a bipartisan way – pointing out that Republican Reps. Liz Cheney and Adam Kinzinger sit on the panel, though both were appointed by Mrs. Pelosi after she rejected two of the Republican caucus’s own choices.

“We can walk and chew gum at the same time,” Mr. Ryan said. “That needs to be looked into.”

Mr. Ryan, 39, has served in Congress since 2003. He has run a stronger-than-anticipated race, raising a lot of money and playing up his independent streak on the campaign trail.

He is vowing to fight for the “exhausted majority” of Democrats, Republicans, and independents, to “rebuild” the middle-class, and revitalize the manufacturing sector.

Mr. Vance, 38, is a venture capitalist and author of the best-selling book “Hillbilly Elegy.”

The central thrust of Mr. Vance’s argument is: Mr. Ryan has failed, and it is time for some fresh voice to represent Ohio.

The race is a nail-biter three weeks out from Election Day.

Mr. Vance has had a consistent lead in recent polls, but the race remains within the margin of error.

The general sentiment is Mr. Ryan is still fighting an uphill battle in a reddening state that Mr. Trump carried by 8 percentage points in the 2020 and 2016 presidential elections.