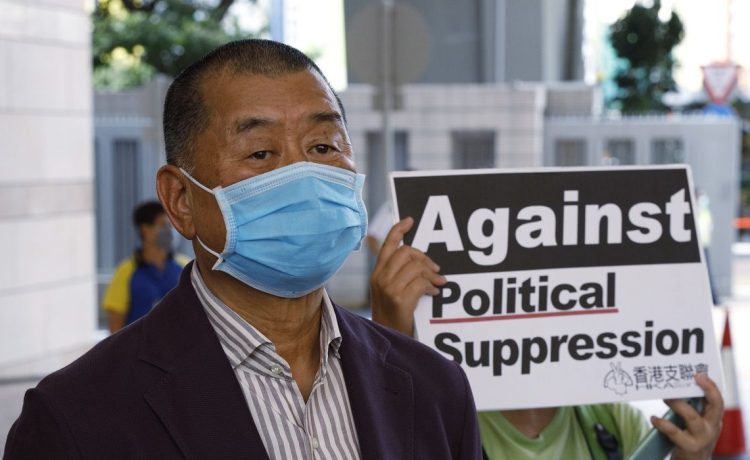 Imprisoned Hong Kong publisher Jimmy Lai — the 74-year-old founder of the now-defunct pro-democracy Apple Daily newspaper — is facing trial on charges that he violated Hong Kong’s strict new national security laws. The Rev. Robert Sirico, a Roman Catholic priest and president emeritus of the Acton Institute, a think tank that promotes individual liberty based on religious principles, has known Mr. Lai — a convert to Catholicism — since 1997. He spoke with Washington Times’ correspondent Mark A. Kellner about the case and its importance in Hong Kong, freedom of the press and the state of civil liberties in China.

Question: You’ve known Mr. Lai for 25 years. From your perspective, is he guilty of anything?

Father Sirico: In the eyes of the Chinese, by their standards, he’s “guilty” in the sense that he is opposed to totalitarianism. In the eyes of any objective standard of justice, no, he’s not guilty. He was exercising freedom of speech. He was very restrained and prudent, especially in the midst of that volatile situation where people were calling for violence.

Question: What do you imagine will happen in his case?

Father Sirico:  His case is coming up in the next few days. I think what [the Chinese authorities] will do this under the Extradition Act, which he was protesting, which those millions of people are out on the streets in Hong Kong are protesting — this very law that I think will be applied to him. My best guess is that they will remove him to the mainland. It will give him less access to people. They’ll be able to control the news on [the trial] to a greater extent. And I think it’s very possible that he’s going to die in prison.

Question: Have you been in touch with him at all? How is he holding up?

Father Sirico: Yes, he is remarkably resilient. He went into this with eyes wide open. What people need to understand is that he wasn’t caught in this situation. He stayed in Hong Kong on principle. I remember the last direct communication I had with him was a request for spiritual reading. And I sent him some things related to saints who have been in prison, [such as] Cardinal Francis Xavier Nguyen Van Binh, who was appointed archbishop of Saigon at the time the Communists came to power there. And he was kept in prison 13 years, nine of them in solitary confinement. He kept journals while he was in prison. So I suggested that [Mr. Lai] read those journals. His personal struggle he sees [as being] with the Chinese people and people everywhere to be free.

Question: What sustains someone such as Jimmy Lai in the midst of this?

Father Sirico: He knows the rightness of his cause, and with a moral person, that’s quite sustaining. … I think Jimmy sees this as a just cause. The second thing that sustains him — and I think this is what adds an added dimension that the Chinese are very obviously afraid of — is his religious commitment. Jimmy has a transcendent sense of the justice of what he’s doing. That is incredibly sustaining. And China’s fear of religion — and they’re ecumenical in this regard — really shows us that they understand a person can be sustained in the face of the brutality.

Question: What are the implications of the Jimmy Lai case for the people of China?

Father Sirico: It’s hard for me to tell from here what the Chinese people know about this [case]. But there are cracks in the wall. Now, this whole protest, initially, and on the surface, with regard to the COVID restrictions, gave us a really quite shocking insight that a lot of people have had pent-up rage about the control of the government. I think the COVID stuff is only the immediate occasion of this. But as you saw immediately, people began talking about other things like [President Xi Jinping] and the Communist Party, the overall lack of freedom, and being a reasonable community of nations. I think that the COVID thing could be like that [Tunisian] fruit vendor in the Middle East who immolated himself and started the Arab Spring because that tapped into something much deeper. And I think the Jimmy Lai [case], if this can become known, this can be a galvanizing issue as well.