Trump blasts Jan. 6 report, doubles down on claims that 2020 election was stolen 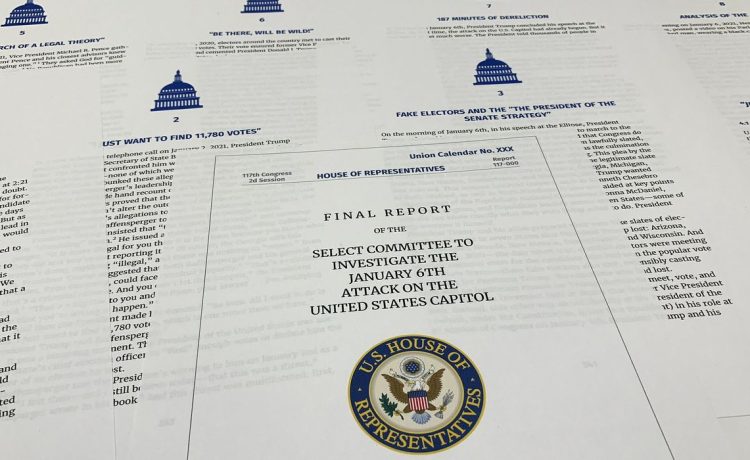 Former President Donald Trump ripped the House Jan. 6 committee’s weighty final report by calling the panel’s investigation a “witch hunt” and doubling down on his claims that the 2020 presidential election was stolen.

In a statement on his social media platform Truth Social, Mr. Trump said the 18-month probe by the Democrat-led House Select Committee to Investigate the Jan. 6 Attack on the U.S. Capitol failed to address what he said were the true causes of the riot.

“The highly partisan Unselect Committee Report purposely fails to mention the failure of Pelosi to heed my recommendation for troops to be used in D.C., show the “Peacefully and Patrioticly” words I used, or study the reason for the protest, Election Fraud,” he wrote. “WITCH HUNT!”

The panel released its highly anticipated, 845-page summation of events leading up to the January 2021 attack on the Capitol late Thursday in its parting shot before the committee is dissolved under a Republican-led House next Congress.

After holding a series of public hearings over the summer, the committee outlined in detail its account of what the lawmakers say was Mr. Trump’s plan to overturn the 2020 presidential election and spur a mob of his supporters to storm the Capitol as Congress met to certify the results.

The report pins the blame for the Capitol attack squarely on the former president and offers what outgoing House Speaker Nancy Pelosi, California Democrat, calls a “clarion call to all Americans: to vigilantly guard our democracy and to give our vote only to those dutiful in their defense of the Constitution.”

The findings accuse Mr. Trump of disseminating false allegations of election fraud related to the 2020 presidential contest, pressuring state and local election officials in the wake of the election, summoning his supporters to Washington on Jan. 6, and inciting violence by his supporters at the Capitol.

Mr. Trump, however, remains unbowed by the report and has signaled he remains unwilling to back down from his claims that the election was stolen.

“The government of the United States changed our Election Result, and it just doesn’t get any worse than that,” Mr. Trump wrote on Truth Social Friday. “Just look at the damage that’s been done to our Country, and the World, in the last two years – it’s incalculable. TRUMP WON!!!”

Before releasing its report, the panel recommended in its final public proceeding that federal prosecutors pursue charges against the former president for inciting the attack on the Capitol by the pro-Trump mob, obstructing an official proceeding of Congress, conspiracy to defraud the government, and making false statements on fake presidential electors.

Mr. Trump said the move was intended to derail his 2024 campaign for the White House, but predicted the move wouldn’t harm him.

“What doesn’t kill me makes me stronger,” Mr. Trump said in a statement. “These folks don’t get it that when they come after me, people who love freedom rally around me. It strengthens me.”

He said Democrats “are out to keep me from running for president because they know I’ll win and that this whole business of prosecuting me is just like impeachment was — a partisan attempt to sideline me and the Republican Party.”

Mr. Trump also said Monday that he “pushed for 20,000 troops to prevent violence on Jan. 6 and that I went on television and told everyone to go home.”

While Mr. Trump was involved in discussions before Jan. 6 about the National Guard response, he did not issue any orders for troops before or during the rioting. He issued a video statement about three hours after the attack began, urging supporters to go home.