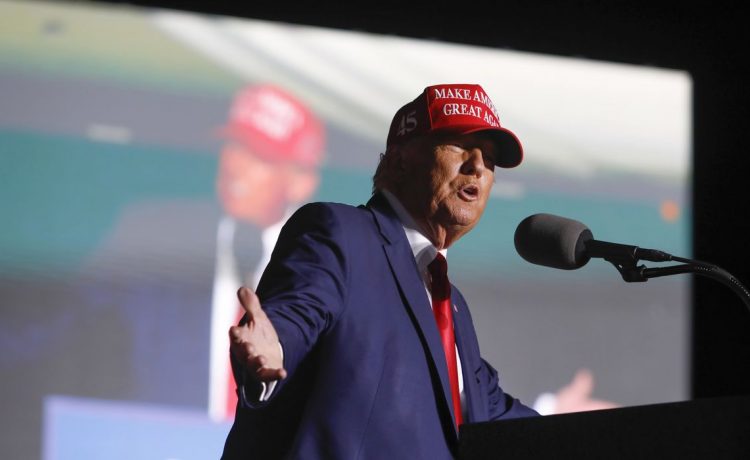 Former President Donald Trump cast doubt on the outcomes of Pennsylvania’s elections, saying he was “worried” about Republicans’ chances of winning in the state due to efforts to cheat by Democrats.

Mr. Trump, who has claimed the 2020 election was stolen from him for the past two years, said he has concerns that Senate candidate Dr. Mehmet Oz and gubernatorial candidate Doug Mastriano could face the same fate as him.

“The 2020 election was not right. It was not right,” Mr. Trump said. “I’m so worried about Oz and Doug Mastriano. We can’t let this happen.”

Mr. Trump held a Saturday rally in the Pittsburgh suburb of Latrobe to support Mr. Oz and other Republicans in the Keystone State, which has the potential to determine control of the Senate.

The former president also urged voters to go to the polls in person on Tuesday, rather than voting before or requesting a mail-in ballot.

“I like to say get out on Tuesday because it’s harder for them to cheat if you go and vote in person,” Mr. Trump said.

Mr. Trump has long cast doubts about the efficacy of mail-in voting since states expanded that option amid the pandemic, though little historical evidence has shown that absentee voting is less safe than in-person voting.

A new survey by the Pew Research Center found that Republicans’ confidence in absentee ballots is low, with only 37% GOP voters saying they believed mail-in ballots would be somewhat confident their ballot would be accurately counted through that method. Only 10% said they were very confident.

This cycle, Democrats have dominated early voting turnout and mail-in ballot requests in several states, according to election data collected by the United States Elections Project.

Mr. Trump also commented on the ongoing legal battles in Pennsylvania over a state Supreme Court decision ordering counties to throw out “undated” mail-in ballots that arrive on time to be counted, but with missing handwritten dates on the envelopes.

Several voting rights groups, including the NAACP, have sued in response to the action.

“They cheated like dogs, and you’re mostly all Democrat Supreme Court, you can’t do it anymore,” Mr. Trump said.

Mr. Trump, who also touched on inflation, crime and illegal immigration among other issues, said Mr. Oz’s race will be the defining choice in the midterms that is likely to determine control of the Senate.

“This could be the vote that’s going to make the difference between a country and not a country because it could be 51, it could be 52, or it could be 49 and if it’s 49 for Republicans, I don’t know if [this country] is going to live for another two years,” Mr. Trump said.

Mr. Oz is facing a close race against Democratic Lt. Gov. John Fetterman, whom Mr. Trump accused of being soft on crime and the “single most dangerous Democrat” seeking office this cycle.

Mr. Oz has been leading Mr. Fetterman for the first time in polls since the debate between the two candidates, which showed Mr. Fetterman’s health challenges on display.

Mr. Fetterman, who suffered a stroke five months ago, stumbled on his words and answers. He required the use of closed captioning monitoring in order to follow debate questions.

Mr. Mastriano faces tougher odds this election, with Democratic Attorney General Josh Shapiro having a strong lead ahead of him in polls.

A Monmouth University poll had more than half of potential voters saying they would definitely or probably vote for Mr. Shapiro, while only four-in-ten voters went for Mr. Mastriano.

He offered his supporters a stark choice for the future of the country.

“If you support the decline and fall of America, then you must vote for the radical left Democrats,” he said. “If you want to stop the destruction of our country and save the American Dream, then this Tuesday, you must vote Republican in a giant red wave.”

Republicans are expected to have a bullish election, needing a net gain of just five seats in the House to take the majority.

The Senate, though seen as a toss-up, was also moved in Republican favor by the nonpartisan Cook Political Report this week.