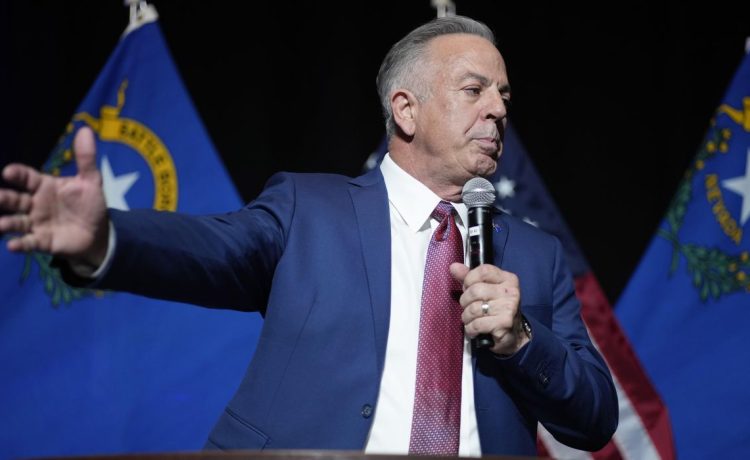 LAS VEGAS (AP) — Republican Joe Lombardo, a career police officer and sheriff in Las Vegas who was endorsed by former President Donald Trump, has been elected governor in Nevada.

Lombardo defeated Steve Sisolak, regaining the governorship of the Silver State for the GOP and making Sisolak a one-term Democrat amid two decades of Republicans.

“It appears we will fall a percentage point or so short of winning,” Sisolak said in a statement conceding the race to Lombardo shortly after batch of vote results was reported in Clark County. “That is why I reached out to the sheriff to wish him success.”

The count of ballots in Nevada took several days partly due to a provision of a broad mail voting law passed by the state Legislature in 2020. It requires counties to accept ballots postmarked by Election Day if they arrive up to four days later.

Lombardo, 60, started as a police officer in Las Vegas in 1988 and served two terms as Clark County sheriff, the nonpartisan elected head of the Las Vegas Metropolitan Police Department, the largest police agency in the state.

He weathered campaign attacks on rising crime by acknowledging the increase during the last two years and blaming funding limits and mandates from a Democratic-controlled Legislature.

Lombardo sometimes distanced himself from Trump during the campaign, and never offered an endorsement of unfounded claims that the 2020 presidential election was marred by fraud. Lombardo said during his only campaign debate with Sisolak that any irregularities were not enough to change the outcome of the election.

Lombardo, who emerged for the general election from a crowded GOP primary field, derided a state public health insurance option that the Legislature passed and Sisolak signed, and said he looks at abortion through a “pro-life lens.”

But he acknowledged that state law approved by Nevada voters in 1990 allows abortions up to 24 weeks into pregnancy. “There’s nothing the governor can do,” he said, to change that law.